Incredible Snake Island: One of the Most Uninhabitable Places in the World About 21 miles off the Brazilian coast lies the Ilha da Queimada Grande, also known as Snake Island. It is an island infested with snakes. Snake Island measures around 106 acres, and from sea level, the terrain rises to 676 feet. It has a diverse landscape, with bare rocks near the water and open grasslands and a rainforest higher up. The rainforest makes up around 62 acres of the island. The deforestation at the lower level is due to fires that the locals started in an attempt to clear the rainforest and also to kill off the snakes to start banana plantations.

The plan didn’t work out too well, but the fires and deforestation gave the island its name Queimada Grande. In Portuguese, Queimada Grande roughly translates to Burn Fire or Big Burnt Island.

There is no beach on Ilha da Queimada Grand and accessing the island via the algae-covered rocks is quite difficult. However, as the island is uninhabited and very few people visit, it is not much of an issue. The climate on the island is temperate. 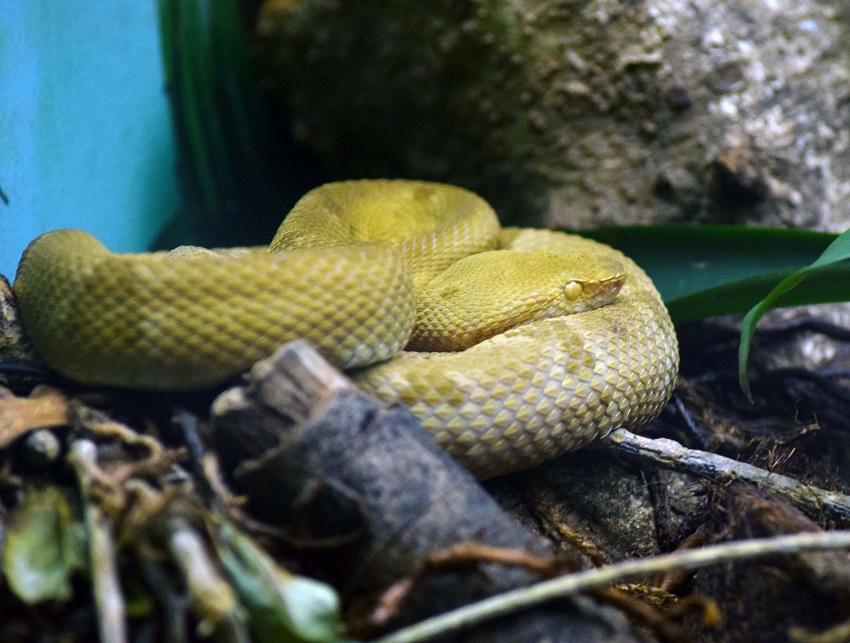 In Brazil, pit vipers are the most dangerous snakes as far as humans are concerned. Over 90% of the fatalities that occur in Brazil due to snake bites are from pit vipers. However, the venom of the Golden Lanceheads is even more potent than that of their mainland cousins as they evolved separately.

Originally, many millions of years ago, Ilha da Queimada Grande was part of the mainland. The rising sea levels, however, cut it off and transformed it into an island. The pit vipers that were on the island now became isolated, and, as there were no predators to cull them, they bred and proliferated.

However, the only prey they had a chance at getting were migratory birds that landed on the island; the local birds were too smart for the snakes. Out of the 41 bird species that visit the island, the snakes are only able to catch and eat the southern house wren (the Troglodytes musculus) and the flycatcher (the Chilean Elaenia).

To catch these birds, the snakes had to develop specific features to survive.

The Golden Lancehead’s venom, for instance, had to be strong enough to stun and kill the birds before they had a chance to escape. Aside from being quick-acting, the venom also burns the flesh around the bitten area. Neither birds nor animals stand a chance once they are bitten by a Golden Lancehead, and that goes for humans as well. There is no guarantee that people will survive a bite from one of these snakes even if they do receive prompt medical attention.

And there are so many Golden Lanceheads on Ilha da Queimada Grande that the chances of getting bitten are high. While the popular notion is that there is one snake in every square meter on the island, the estimates are probably lower. Rather than 430,000 or thereabouts, there are only about 4,000 snakes on the island, and most of these are in the rainforest area.

As the population is small it leads to inbreeding causing genetic defects—such as Golden Lanceheads with two heads. Also, the competition for resources is stiff.

Ilha da Queimada Grande is the only place on earth where Golden Lanceheads exist. These snakes are a critically endangered species and appear both on Brazil’s endangered species list and the Red List of Threatened Species by the IUCN.

Tales of the Deadly Snakes of Snake Island

Rumour has it that once a fisherman decided to stop at the island to pick bananas from the abandoned banana plantations. Coming under attack from the Golden Lanceheads, he had to flee back to his boat. He made it onboard, but, by this time, the venom had spread throughout his body. When people came looking for him a few days later, they found him lying dead in a pool of blood on the boat deck.

Another chilling story is about the fate of the lighthouse keeper and his family. While there is no official confirmation about their fate, the rumour is that one night several Golden Lanceheads slithered in through a window into the family’s dwelling and attacked them. The family panicked and ran from the house towards their boat. However, the snakes in the trees bit them as they fled past. Later, searchers found the dead bodies of the family around the island.

It is both for the protection of the tourists and also to protect the endangered snakes. Only members of the Brazilian Navy, the technicians who carry out maintenance work on the automated lighthouse, and herpetologist and other researchers, who have official permission from the Chico Mendes Institute for Biodiversity Conservation, can visit the island.

The researchers capture the snakes, weigh them, and microchip them for research purposes. The venom has medical uses for treating heart disease, blood circulation issues, blood clots, and cancer according to biologist Marcelo Duarte of the Brazilian Butantan Institute.

Unfortunately, the potential of the venom has brought the Golden Lanceheads to the notice of wildlife smugglers who trap these snakes and sell them illegally. One serpent can go from anywhere between $10,000 to $30,000.

Enjoyed this article? Also, check out “Assateague Island and its Feral Horses“.

Previous Article
Lithopedion: The Extremely Rare Medical Condition of Having a ‘Stone Baby’
Next Article
Om Banna: The Motorcycle Temple for Safe Journey