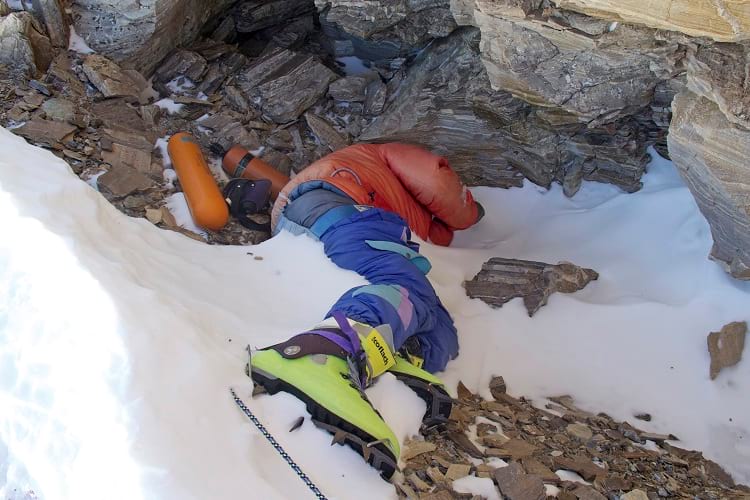 The body of a dead Mount Everest climber, which is now referred to as Green Boots. (Maxwelljo40 / Wikimedia Commons)

The fascination that Mount Everest offers to climbers comes at a price. There is always a lurking danger of one falling to eerie depths, dying from lack of oxygen or a fatal hit by boulders falling. There is also a possibility that dead bodies may not be brought back for last rites in view of harsh weather. Yet Mountaineering goes on with unabated fervour and enthusiasm. Dead bodies that stay put where they fall become beacon lights to guide climbers. The mortal remains become milestones telling climbers the altitude on their way to Mount Everest. Some 200 such bodies stay put on the Himalayas and act as a guidepost for the intrepid mountaineers of future.

The story of Green Boots

‘Green Boots’ used to be a popular milestone on the way to the summit. These were green coloured shoes purportedly worn by an Indian climber named Tsewang Paljor. He was part of an expedition in 1996 which had only one survivor, Harbhajan Singh. Sensing imminent danger, Singh had urged his three colleagues, including Paljor, to give up and turn back to camp. But the team ignored him and reached the summit. However, on return, they fell to blizzard and zero visibility. Paljor’s body lay frozen near a cave, his green shoes being most conspicuous of all remains. Hence the name, Green Boots. In 2014, Green Boots, like many other fallen climbers, were reverentially dropped on the lee side of the mountain.

Upon passing Green Boots, mountaineers enter ‘death zone’, the top end of the Himalayas, almost 26,000 feet above the sea level. It has only one-third of oxygen compared to plains. This, coupled with high atmospheric pressure makes the death zone extremely hard for climbers. They feel numb, tired, disoriented and can barely thrive beyond two days. No wonder, the mountaineering protocol prescribes leaving the dead on ground zero rather than risk more lives in rescue and recovery. Where survival of self is a grim challenge in itself, saving others would naturally be a second priority.

The tragic death of David Sharp

Another mountaineer, David Sharp had joined Green Boots at the same cave. Making a solo attempt against peer advice did him in. He sat at cave distressed and frostbitten and died with head resting on his bent knees. Unlike Green Boots, he was lucky enough to be seen alive by at least 40 people, but none helped. Sharp’s death triggered a wide-ranging debate on whether mountaineering was all about reaching the summit and neglecting comrades in danger. Sir Edmund Hillary, the first man to summit Everest criticized climbers for ignoring David Sharp. Calling such an apathy ‘horrifying’, he emphasised that a colleague must be helped even if it meant cancelling expedition. The mad rush to reach to the top (summit fever) regardless of the wellbeing of fellow climber was widely condemned. On the flip side though there were salvos saying climbers may have confused David for Green Boots. And that, some mountaineers did indeed try to help him but gave up on finding that his condition was too precarious to be restored to normal. Death of other prominent climbers

With nearly 200 deaths, and many bodies still lying in the mountain range, Himalaya has acquired a dubious distinction of being the world’s largest open-air graveyard. After first ever conquest of Everest by Edmund Hillary and Tenzing Norgay in 1953, over 4000 mountaineers have tried to scale the mountain, braving harsh climate and daunting terrain of death zone; all for tasting the glory of reaching world’s highest summit. Some of them never came back and became part of the mountain body, preserved in ice.

Hannelore Schmatz’s story is another one of this trail. She reached the peak in 1979 but died on her way down. The first woman and the first German citizen to scale Mount Everest, she was warned by her Sherpa not to set up camp in the death zone. But she did and braved snowstorm during the night. However, just 330 feet short of base camp, she fell down exhausted, never to get up again. Her body remained well preserved in sub-zero temperatures on the southern route. Resting against withered backpack, eyes open and hair blowing in wind, the corpse was subsequently pushed off the mountain by strong winds.

Why are the dead bodies not retrieved?

Horrendous weather conditions on Everest, especially in the death zone, make it almost impossible to retrieve a dead body. Lack of oxygen and treacherous terrains make the task all the more formidable. Bodies when found, are seen inextricably merged with the frozen ground. The same factors which kill mountaineers, make it difficult for the rescue team to help the needy. Rescue operations may, in fact, add to the overall tragedy. Two rescuers died while trying to recover Hannelore Schmatz’s body, the lady mountaineer from Germany. Many lives were lost in the process of helping out distressed climbers. Like Sergei trying to save his wife Francys Arsentiev, and both losing their lives in 1998. Their team tried hard to save the lady but gave up on realising it was impossible. Her husband Sergei though persisted with the ominous result. Marker role of Francys Arsentiev on snowy terrain ended in 2007 as her mortal remains were reverently shoved to a lower face of the mountain.

As long as the mountains are there, to paraphrase George Mallory differently, Mountaineers will keep climbing them regardless of dangers to their life. The show, as they say, must go on.

Previous Article
Nakagin Capsule Tower: A Futuristic Building from the Past, Which Might Just Not See the Future
Next Article
Dhanushkodi: Where a Cyclone Ripped Apart an Entire South Indian Town, Rendering it Uninhabited