Throughout history, kings and governments had imposed some weird taxes. You may have heard of a Bachelor Tax, a Cowardice Tax or even a tax on beards. But have you ever heard of a tax on a woman’s breast? Believe it or not, such a tax was imposed on women of lower caste in Kerala during the early 19th century.

The breast tax or locally known as Mulakkaram, which was prevalent in the Travancore Kingdom, was imposed on Dalit and backward class women. It was especially slapped on Avarna women, who belong to the lower caste.

These women were forced to pay a tax on their breasts if they desired to cover their breasts with an upper cloth. In those days, women of low cast baring their breasts were considered as showing respect to superior castes like the Namboodiris (Brahmins).

During the reign of Balarama Varma I

During the reign of Balarama Varma I (1798–1810), Queen Gowri Lakshmi Bayi (1810–1815) and even Uthradom Thirunal Marthanda Varma II (1846–1860) Breast Tax were prevalent. Both men and women of the lower castes like the Ezhava and Nadar communities were not permitted to cover their chests before members of the upper caste.

As the caste system in Kerala of that time was oppressive, people of the lower castes were not entitled to wear any upper cloths. Upper cloths were a sign of prosperity and wealth in those days.

Writing in his book, ‘Native Life in Travancore’, author Samuel Mateer claimed that lower castes were burdened with taxes and remained in debt and poverty. Whereas, the upper caste people like the brahmins and the Nairs prospered. A Brahmin family in Kerala, 1902. (Clain and Perl studio, Madras)

Nair women were also not permitted to cover their breasts

According to an article, Travancore officials would visit every house to collect Mulakkaram from any low caste women who passed the puberty age. There also reports that claimed the tax amount depended on the breast size. 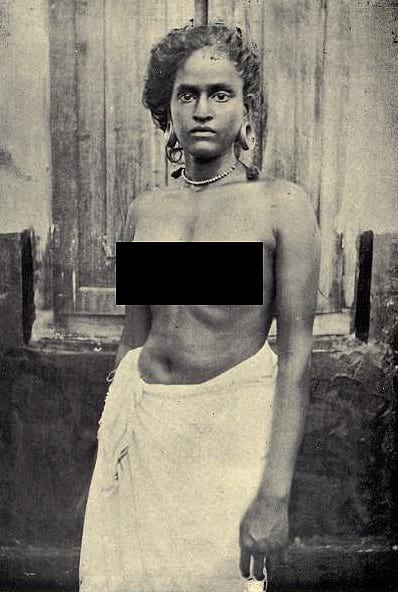 Censored Photo: A woman from a lower caste in Kerala. (Edgar Thurston)

However, it is interestingly to note that Nair women were also not permitted to cover their breasts while entering temples or in front of the Brahmins. There was, therefore, all-around oppression of the people of the lower caste in the Kingdom of Travancore. Namboodiri women could cover their breasts

In total contrast to the lower caste woman, Namboodiri women could cover their breasts with an upper cloth. These women were, however, mostly confined to the inner rooms of their homes. Hence, they were known as antharjanam.

Namboodiri women could not talk to anybody except to their husbands and immediate families. On a rare occasion, when they are allowed to go out they were to cover their face with a palm umbrella.

The rise of the Syrian Christian or Roman Catholic communities

The early 19th century also witnessed the rise of the Syrian Christian or Roman Catholic communities. In 1813, during the reign of Queen Gowri Lakshmi Bayi, Colonel John Munro was the Dewan of Travancore court. 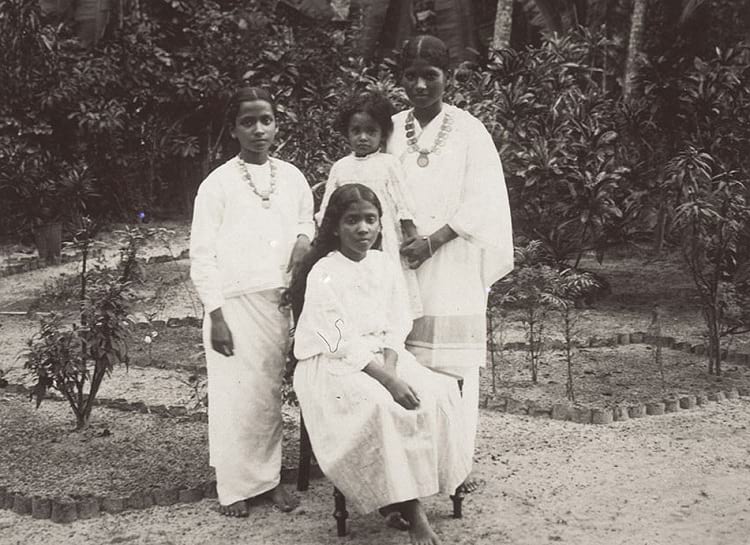 In his bid to propagate Christianity and gain the confidence of the Nadars, Colonel Munro proposed a solution to the oppressive Breast Tax. As Dewan, he issued an order saying that if Nadars convert to Christianity their women can cover their breasts with upper cloth.

This order irked the Queen and her court. Their protests went partially unheard. As a result, the Nadar women were since then permitted to wear a long blouse similar to the Syrian Christians and the Muslims.

Later, however, to escape the royal oppression lower caste people increasingly converted to Christianity to lead an honourable life. Since then women Christian converts had the freedom to cover their breasts with kuppayam or outer cloak.

Yet, the upper castes denied permission to Christian Nadar women from wearing an upper-cloth similar to the Nair women. The Nair women had the privilege of wrapping a cloth around their torso in a particular style.

The idea was to retain caste hierarchy

The idea was to retain the hierarchy between the two communities in a distinct manner. But Christian Nadar women rose in protest. They demanded that they are permitted to wear a cloth similar to the Nair women. With the increasing influence of Christianity, resentment started growing against the upper castes. Following which violent clashes took place across the Travancore kingdom.

These protests and clashes came to be known as the Channar Revolt or Channar Lahala. The revolt was also known as Maaru Marakkal Samaram. During the violence that followed, low caste women who wore upper cloth or blouse were stripped naked. Churches and houses of low caste people were also raised to the ground.

The bravery of a low caste woman named Nangeli

Because, in 1803 the bravery of a low caste woman, named Nangeli, turned symbolic of the struggle for the upper cloth. She belonged to a village called Cherthala in central Kerala. In that 19th century year, Nangeli ferociously defied the tax collector, who reached her house to collect the breast tax.

When the tax collector exerted pressure on her, she unflinchingly chopped off her breasts and placed them on a banana leaf in front of the tax collector. She eventually bled to her death. On coming to know of this, Nangeli’s husband too committed suicide.

Later, the land where she stayed was named Mulachiparambu, simply meaning ‘the land of the breasted woman’.

No mention in the official history of Kerala

Though the story of Nangeli’s sacrifice spread across the state, it has no mention in the official history of Kerala.

The upper cloth mutiny can be considered as one of the pioneering struggles for the liberation of women in the whole of Kerala. Writing on the impact of the revolt in his book titled ‘Vaikuntaswamiyum Samoohika Navothanavum’, historian Joy Balan Vlaathangara said this revolt triggered more agitations across the state.

Some of the other agitations were for the right to walk on public roads, entry into temples and against oozhiyam vela (work without pay). As a result, the face of Kerala changed for the better. It is also sad to note that CBSE deleted a section on Kerala’s caste history in its social science textbook.

Also, there is no mention of the breast tax in the book ‘A Hundred Years in Travancore, 1806-1906: A History and Description of the Work Done by the London Missionary Society in Travancore, South India, During the Past Century’. This is a reflection of the official apathy towards a revolt that changed the very caste structure of Kerala today.

Enjoyed this article? Also, check out “In Tsarist Russia Members of the Secret Skoptsy Sect Believed in Self-Castration“.

Previous Article
What is a Micronation? and Some of the Most Popular Micronations in the World
Next Article
Animal Suicide: Do Animals, Like Humans Resort to Ending their Own Lives?