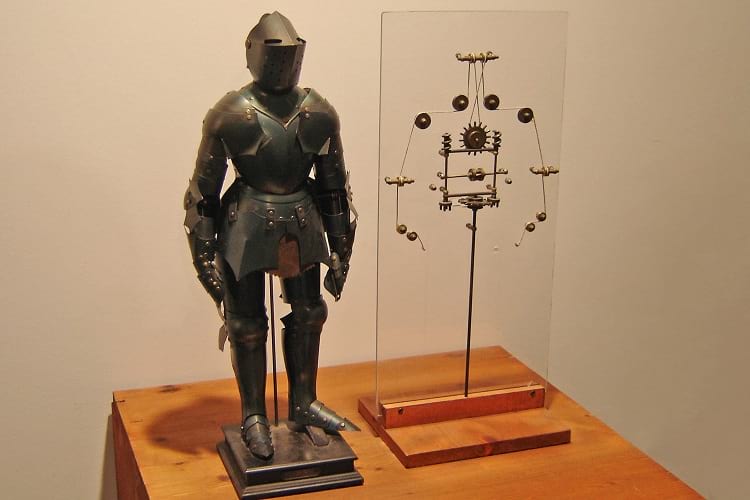 A recreation of Leonardo’s robot or mechanical knight based on his drawings. (Erik Möller / Wikimedia Commons)

The Italian Renaissance was one of the greatest epochs in human history. During this period, there were extraordinary developments in art, sculpture, architecture, philosophy, literature, and many other human endeavours.

A rediscovery of Ancient Greek and Roman cultures—from surviving works that Islamic scholars had preserved as well as surviving art and sculptures— influenced and inspired most of the artists, sculptors, architects, writers, philosophers, and other intellectuals. Using the Greek and Roman works as their base, they built further on these to create astonishing masterpieces.

As you might expect, there was no dearth in geniuses engaged in these activities, but Leonardo da Vinci is a personality that still manages to tower over everyone.

In terms of output, he was not actually as prolific as some of his contemporaries. A restless spirit, he had a mind that overflowed with so many ideas that he didn’t have the time to bring them all into fruition. He painted only a few paintings, most of which are now very well-known, like the Monalisa, the Last Supper, and The Virgin and Child with Saint Anne. His fame rests on these as well as on the fact that he was a very multi-faceted man.

Apart from art, he could turn his hand at architecture, mechanics, armaments, and more. His many surviving notebooks are filled with designs and ideas. Some of which were advanced not only for his time but come across as amazing in ours as well.

In 1957, the researcher Carlo Pedretti discovered some of Leonardo da Vinci’s sketchbooks that contained design notes for a mechanical knight. While there isn’t one single complete drawing of the mechanical knight—if Leonardo da Vinci made a complete drawing, it didn’t survive over the ages—there are many fragmented details of the design in various sketchbooks.

Historical accounts had already mentioned da Vinci’s famous Automa cavaliere that is Automaton knight. However, most people assumed these stories were exaggerated. The discovery of the notebooks proved this was not so.

Leonardo da Vinci designed the mechanical knight to impress his patron Ludovico Sforza, who was the ruler of Milan. In 1495, Ludovico Sforza had a pageant at his court and asked Leonardo da Vinci to oversee all the arrangements of the celebration. The latter, of course, outdid himself when he unveiled his mechanical knight at this gathering. Apparently, it left everyone there thunderstruck. They had never imagined seeing a machine that resembled an anatomically correct knight and, moreover, moved like one too.

It is well-known that Leonardo da Vinci carried out extensive anatomical research. He even dissected cadavers and made detailed drawings of their interiors. As a result, he developed a deep understanding of the human body. He was able to figure out that it was the muscles that enabled the bones and joints to move.

When he designed his mechanical knight, he made sure it was anatomically correct. The knight has proportionate limbs and joints that follow the Canon of Proportions that Leonardo noted in the Vitruvian Man. Furthermore, he tried to incorporate the way human muscles worked into the design.

Clad in medieval German-Italian armour, Leonardo’s robot could move its arms and raise its own visor and wave its sword. It could also move its jaw and neck. Furthermore, it could sit, stand, lie down, and walk. These robotic movements were very advanced and human-like for that period. In fact, we can say that the mechanical knight was the first humanoid robot that the world ever knew.

Known as Robot di Leonardo or Automa cavaliere, that is Automaton knight, the machine used two elaborate and connected systems made up of pulleys, cables, gears, and wheels to move. In his article ‘The da Vinci Robot’, Michael Moran tells us that one of these systems was a four-factor one and was used for the movements in the hands, wrists, elbows, and shoulders. Leonardo fitted this cylindrical system into the knight’s chest. The other system was external and tri-factor, and it was used to move the ankles, knees, and hips. All the movements were to the drumbeat.

In addition to creating a model of Leonardo’s robot, Mark Rosheim also used some of his design ideas to build robots for planetary exploration for NASA.

You can find how Rosheim built the mechanical knight as well as other of Leonardo’s robots—a programmable cart, a bell-ringing automaton, and a lion—in his book “Leonardo’s Lost Robots.”

Their book “Leonardo da Vinci’s Robots” contains reproductions of Leonardo’s original designs and manuscripts. Further, along with this book, Leonardo3 offers a kit with which you can have a go at building Leonardo da Vinci’s programmable cart yourself.

As mentioned above, Leonardo da Vinci used his engineering skills to design other robots as well. These include a mechanical lion that, like the knight, was capable of movement. It could walk and, supposedly, could also hold and offer flowers. While there are no eye-witness accounts of this lion, Leonardo apparently designed it for Guiliano de Medici to be given as a gift to the King of France. In 2009, the French museum, the Château du Clos Lucé and Parc, built a modern version of this lion.

Leonardo da Vinci was an incredible man for any age. His ideas and designs of robots have considerably aided the development of modern robotics. It is interesting to wonder about the things he might have achieved if he had access to many of our modern conveniences.

Enjoyed this article? Also, check out “The Turk: The 18th Century Automaton Chess Player was a Fore-Runner of Computer Age“. Previous Article
The Rise and Fall of the Victorian Era Creepy Therapeutic Treatment Called Electric Bath
Next Article
Chand Baori: A Quaint Remnant of the Past