Wind in the Willows: The Singing Ringing Tree

In the 18th century, social theorist Jeremy Bentham came up with a design for prisons which could be observed by a single guard, without the inmates being able to tell whether they are being watched. The structure would be circular and, due to its “all-seeing” purpose it gained the name Panopticon. However, the panopticon has found a much more beautiful purpose now.

In the Pennine hills overlooking Burnley, in Lancashire, England, stands a wind-powered sound sculpture called the Singing Ringing Tree. The sculpture is one of the four sculptures in the arts and regeneration project named Panopticons.

Panopticons was started by the East Lancashire Environmental Arts Network and the Mid Pennine Arts, and the structures are meant to provide a comprehensive view across East Lancashire, England, as symbols of the renaissance of the era. The four sculptures were constructed across Blackburn, Burnley, Pendle and Rossendale over a period of six years, starting in 2001. Along with the Singing Ringing Tree, The Atom, Colourfields and Halo were the other three projects.

The Atom is an elliptical viewing cocoon-like structure and is set atop the hillside overlooking Wycoller village. Steely grey in colour, the Atom is constructed with ferro-cement and coated in a metallic paint, which gives it a distinctive sheen under the sunlight. A polished silvery steel ball sits in the centre of the elliptical enclosure, much like the nucleus of a metal atom. There are small circular windows placed for viewing across the structure, mimicking the effect of electrons orbiting the nucleus.

Colourfields, situated in Blackburn, is a former historical site restored to modern art. The Mid Pennine Arts initiative took the cannon battery in Corporation Park and restored it with a candy coloured viewing platform at a raised height, offering visitors a stunning view of the neighbouring towns of Lytham, Southport and Fleetwood.

Halo, much like its name, is a glowing concentric steel lattice 18 metres in diameter at the largest and stands five feet above the ground. In the day, it looks much like a silvery carousel roof, but come dusk, and the Halo is lit up with energy efficient blue LEDs, casting a soft slow across the park it is situated in. To add to its environmental consciousness, the structure is powered by a quiet wind turbine in order to minimise sound pollution, which would otherwise disturb the native fauna in the Granville Park Conservation Area nearby. 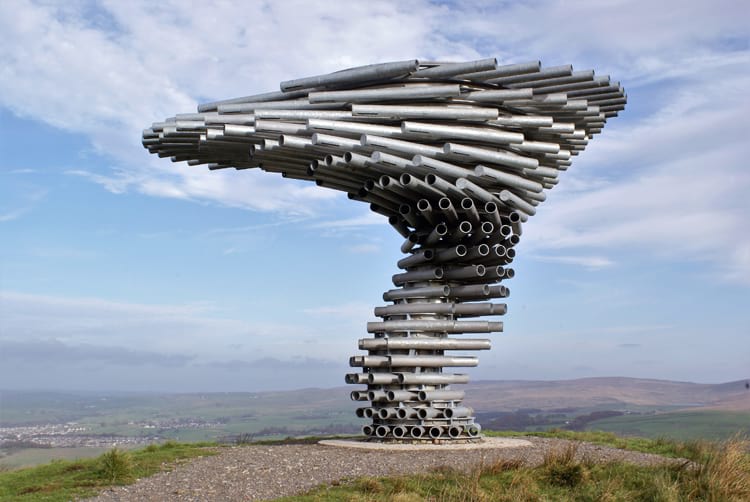 The Singing Ringing Tree is one of the 21 landmarks chosen by the British government as the art pieces that recognise 21st Century British art movements. The Independent and British Airways held the initial public voting, while experts chosen by the government narrowed the list down to 21.

The Tree is wind-powered and resembles the trunk and branches of a tree and is made of galvanised steel pipes. The three-metre tall structure harnesses the energy of the wind and produces a choral sound which covers a range of octaves. The pipes are of varying lengths to tune their sound. To provide additional tuning, there are narrow slits added to the underside of specific pipes, which provides a discordant melody that adds to the overall choral effect of the sculpture. For this sculpture, award-winning duo Mike Tonkin and Anna Liu, and their firm Tonkin Liu, was commissioned to design it. The site of the sculpture used to be a transmission station – the station building, and the lines were then broken down and recycled to make the sculpture. The Tree brought Tonkin Liu RIBA (Royal Institute of British Architects) National Award for architectural excellence. But the Tree’s curious name isn’t just that.

The name is a homage to the 60’s BBC show, The Singing Ringing Tree. Made during the counterculture, flower-power and free love era. The show had psychedelic tones and discordant scores scattered throughout, which is what the sculpture intends to emulate. While the show was initially made for children, The Singing Ringing Tree was deemed too creepy for its target audience. Its myriad cast of a princess, her prince, a six-foot-tall dwarf and talking, magical creatures done in a Brothers Grimm fashion was too off-putting to be a regular feature and was eventually cancelled after three feature-length episodes. To celebrate the sculpture, musician John Keston was commissioned to compose a synthesizer themed piece for The Singing Ringing Tree. The binaural part of the piece was recorded on the sculpture itself over a period of seven days, and it was then combined with a synthesizer track composed by Keston to produce the final product. These recordings are available for public viewing on Keston’s YouTube channel as part of the Mid Pennine Arts initiative.

The Singing Ringing Tree also offers a panoramic view of the Lancashire countryside. It is situated close to the Dunnockshaw Millennium Wood, where many native flora and fauna can be observed. The sculpture also offers a view of Pendle Hill, the Cliviger wind turbines and the town of Burnley, where the Turf Moor football stadium is located.

Previous Article
The Rock of Gibraltar: Guardians of the Strait of Gibraltar
Next Article
Iftikhar Ali Khan Pataudi – The Only Cricketer Who Played for Both England and India