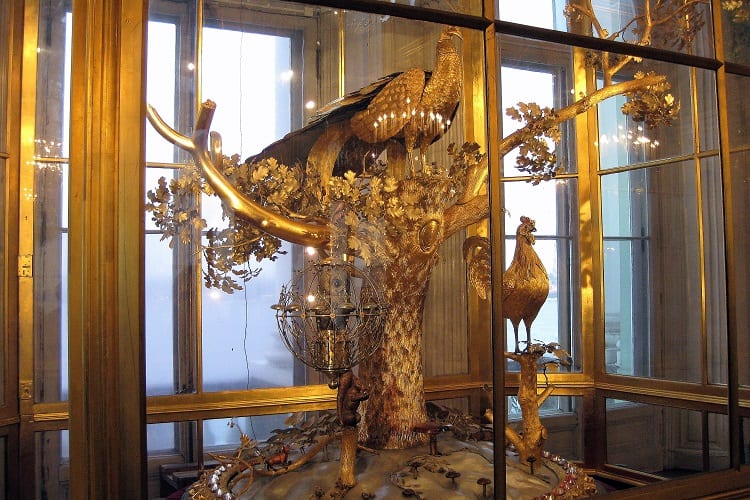 The Hermitage Museum of Saint Petersburg, Russia is not only the second-largest art museum in the world but it also houses the only last 18th Century automaton in a fully functioning condition. The museum was founded in 1764 when Catherine the Great, the Empress of Russia, purchased enough paintings from a Berlin merchant to open a gallery.

One of the pieces, the Peacock Clock designed by James Cox, is a magnificent work of 18th century automaton art in this museum. The clock features 3 life-sized mechanical birds that move and act like real birds. There’s a peacock, a cockerel, and an owl inside a cage that are most prominent among other forest animals and elements like a squirrel, tree branches, and mushrooms. 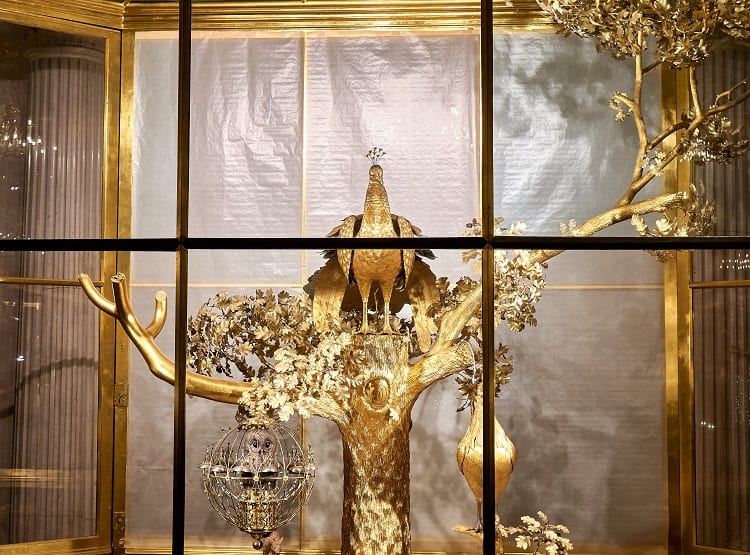 The peacock clock from the front. (Michael Shilyaev / Wikimedia Commons)

How does the peacock clock work?

The designer of the Peacock Clock, James Cox, was a jeweller and goldsmith in the second half of the 18th century who created so many automatons of birds and animals that he eventually opened up his own museum called Spring Gardens (in London). To fund pieces for the museum, Cox organized lotteries in Dublin and London. The peacock that he created for his museum was slightly different; it was perched on an oak stump that had 2 snakes entwined on it.

Around the same time, Catherine the Great’s Hermitage (Museum) was collecting exhibits for the museum. When James Cox’s creations were brought to her attention, she was smitten. She commissioned a gigantic automaton clock for the Hermitage Museum. In order to make the piece in the quickest time frame using the least amount of finances possible, Cox modified the existing peacock structure from his earlier lottery. The clock is used to represent the end of night and start of a day and hence puts up a very dramatic show. The owl in the cage turns its head to some eerie chime music, after which the peacock moves its tail very gracefully to display its gilded fan of feathers. Finally, the cockerel crows to signify the end of the show. The dial of the clock is displayed covertly on the head of a mushroom. Cox used the assistance of a German craft smith who manufactured the clock in London. It was them shipped to Russia in pieces and set to work by a Russian mechanic called Ivan Kuliblin. 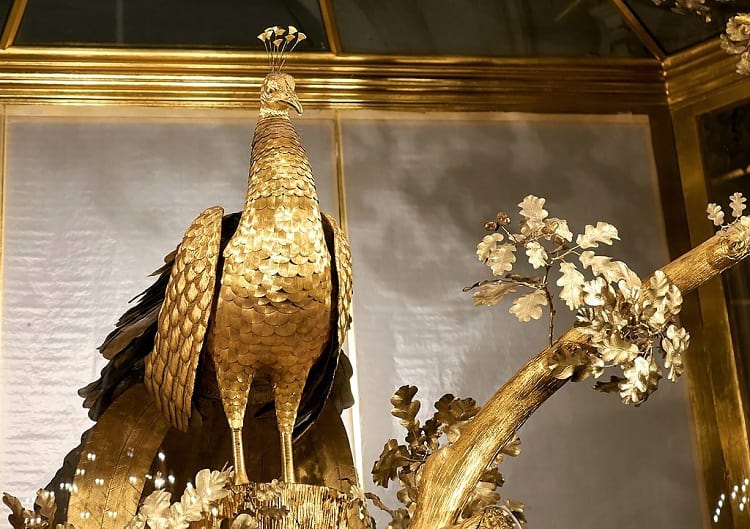 Apart from the Peacock Clock, the Hermitage museum also contains other noteworthy pieces of art and culture. Even though the museum was founded in 1764, it was only opened to the public after more than 80 years in 1852. The museum now showcases only a fraction of more than 3 million pieces that it has, and is world-renowned for its largest collection of paintings. The collection is spread over 6 buildings, out of which only 5 are open to the public: the Winter Palace, the Small Hermitage, the Old Hermitage, the New Hermitage, and the Hermitage Theatre.

The work here was purchased by Catherine the Great from a Berlin merchant who organized paintings from notable painters like Rembrandt, Peter Rubens, Jacob Jordaens, Anthony Van Dyk, and Raphael among others. A majority of the paintings from the original collection are still intact and are at display at the Hermitage. Interestingly, in 1991 it was revealed that the Hermitage held paintings that were looted by the Red Army in Germany. It was only 3 years later that they revealed a collection of Impressionist and Post-Impressionist paintings including those by Van Gogh, Degas, and Renoir.

Previous Article
Proboscis Monkey: The Rare Borneo Monkey Species with an Unusually Long Nose to Lure Its Females
Next Article
AMARG: The US Plane Graveyard Where Aircraft are Stored, Stripped, Repaired, and Restored