No one would like to keep the memory of his sworn enemy in his living room. If one does, there must be a strong reason behind it. Tipu Sultan, the ruler of Mysore from 1782 to 1799 had a memento about his bitter enemy being ravaged by a life-size tiger. It was a mechanical toy called ‘Tipu’s Tiger’. After his death, the British, the enemy, took away this contraption and used it to their advantage. They displayed it to justify why they had to wage a war against Tipu and liquidate him.

‘Tipu’s Tiger’ says a lot about pre-colonial India and its general response to British imperialism.

Rivalry with the British came to Tipu as an inheritance

Battle of Plassey, 1757, gave British a foothold in Bengal to colonize India for the next 100 years. Tipu Sultan’s father, Haider Ali, defeated the British in 1st Anglo-Mysore war in 1767. The second Anglo-Mysore War (1780-84) was inconclusive, but the third (1792) gave the British a clear victory. Postwar negotiations demanded half of Mysore’s geographical territory and a big chunk of the state treasury. To ensure transfer of the negotiated bounty, two sons of Tipu Sultan, Prince Abdul Khaliq (8 years) and Prince Muza-ud-din (5 years), were taken hostage by the British. The pawn though was shown as an act of British benevolence towards young-ones of the vanquished King. No wonder Tipu Sultan was deeply hurt with the double whammy of losing his kin and kingdom. What could soothe his frayed nerves?

Tipu found solace in a mechanical contraption he got custom made to show his angst against the British duplicity. The tiger was his state-symbol. He ordered a life-size wooden tiger mounted on a supine British soldier. A metal frame was put in place to close and open a window on the tiger’s left flank. Putting tiger into play mode activated a music system fitted within. The sounds that came out of the system were an admixture of tiger growling and the victim moaning. At the same time, the soldier’s left hand moves like last minutes of a dying person. 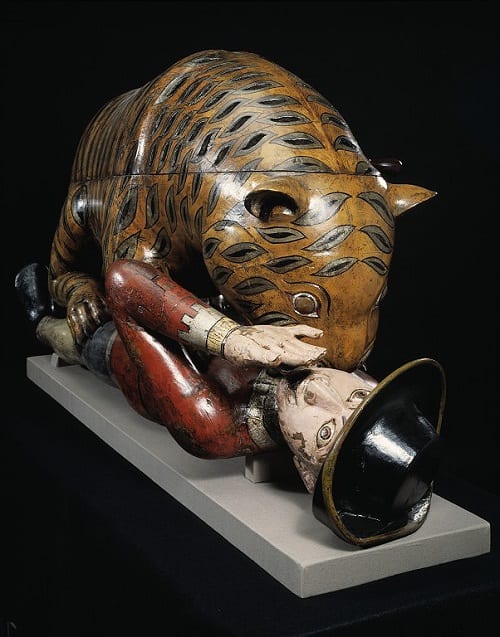 This indeed was an apt release of Tipu’s pent-up emotions. The British referred to him as the Tiger of Mysore and the Toy tiger became a euphuism for Tipu Sultan ravaging the British Imperialism represented by the prey, the white soldier. Tipu toiled hard to put ravaged Mysore back into shape. Adopting European technologies, reforming the military and strengthening foreign relations was part of his action plan. Nevertheless, the British juggernaut overwhelmed him.

In the 4th Anglo-Mysore war in 1799, Tipu went down fighting valiantly. His capital city, Seringapatam, was taken over by the British. White soldiers ransacked and looted the vanquished property till the Duke of Willington intervened a few days later to restore law and order. State treasury, precious metals and jewellery looted from the king’s palace were distributed as rewards in the British army. Tipu’s golden throne was gifted to the East India Company Directors in London. His mental solace, the mechanical tiger, was also dispatched to Britain. It was displayed in East India Company’s New Indian Museum. When the museum closed, it was sent to South Kensington Museum in London, which was subsequently renamed as Victoria and Albert Museum.

Needless to say, British Used Tipu’s mechanical tiger to demonstrate that Tipu was a cruel aggressor and they the poor sufferers like the mauled white soldier in the contraption. A press report on it said: “… a sufficient proof (if any were yet wanting) of the deep hatred of Tippoo Saib towards the English nation.” 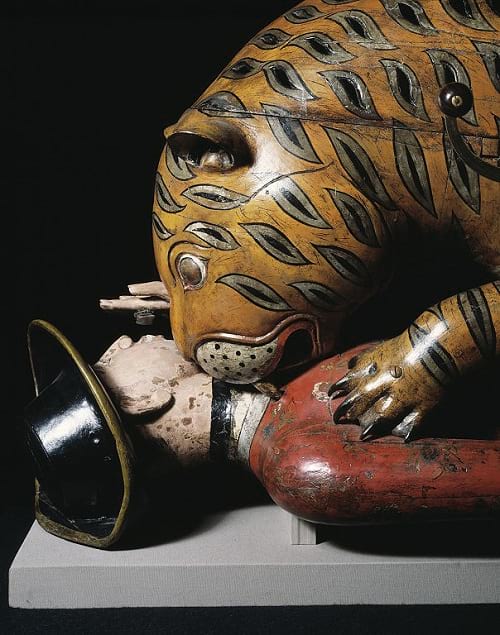 The head of the automaton. (Victoria and Albert Museum / Wikimedia Commons)

Tipu’s toy became a symbol of the bitter rivalry between the British and the Indian rulers, with dual meanings. For the British, it indicated how cruel the Indian rulers were to them. To the Indians, it represented how India responded to the highhandedness of British Imperialism.