Proboscis Monkey: The Rare Borneo Monkey Species with an Unusually Long Nose to Lure Its Females Nature has gifted all animals with a distinct trait that distinguishes them from the rest of the animals in the world. But there is something very different about the proboscis monkey that sets it apart from all the simians. A long, pendulous nose that hangs down till its mouth, giving it an unattractive appearance at the first sight itself is what the monkeys are mostly known for. Endemic to the jungles of Borneo, an island in Southeast Asia, shared by Malaysia, Indonesia and Brunei, these proboscis monkeys are found in large groups along the banks of rivers or living on trees.

Characteristics of the Proboscis Monkey

Commonly known as the Proboscis monkey, its scientific name is Nasalis larvatus, which belongs to the class of mammals. They are named after their peculiar nose, which as per the animal experts, are used as organs to attract mates. The Indonesians call the Proboscis monkey the ‘Dutchman’ since they believe that the early Dutch colonizers had large, pot bellies and unusually long noses similar to these primates. All adult proboscis monkeys are generally brown in colour, with reddish-brown fur on their heads and shoulders. Their arms, legs and long tails are usually grey in colour unlike their entire coat of brown. The female gives birth to a single infant at any time of the year and her gestation period lasts for only six months. The babies are mostly born with bluish faces, which change as they start to mature. 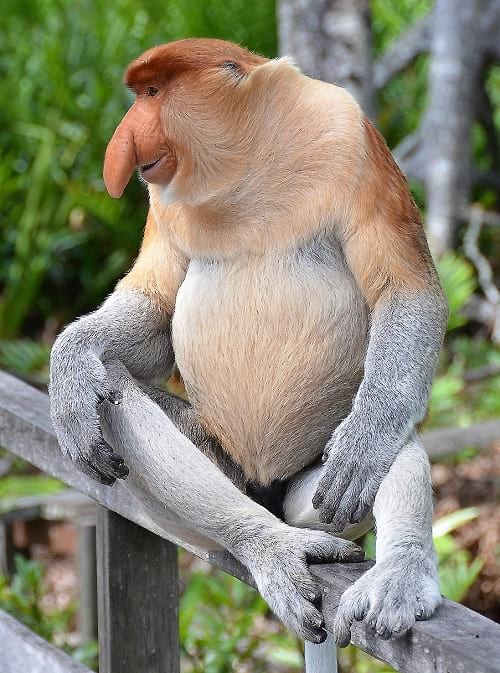 A female proboscis monkey with her child. (Max Pixel)

The proboscis monkey is an arboreal species like its other cousin primates and dwells on trees, and sometimes gets on land in search of food. It lives mostly on trees, near coastal areas like swamps, marshes and mangroves. Its greatest predator is the crocodile that lurks deep in the river waters beneath, attacking the monkey, once it gets in the water. Jaguars and leopards also prey on these monkeys for food. The proboscis monkeys live in harems, which are large groups of females, where a single dominating male takes on more than a dozen females, along with their offspring. Mature, young male monkeys live in separate groups and are usually led by an older male.

Diet of the Proboscis Monkey

The proboscis monkey is an omnivore and can eat anything that it can lay its hands on. But most commonly, the primate’s diet consists of seeds, leaves, fruits and occasionally insects. The monkey eats only unripe fruits and regurgitates its food from the stomach like ruminant animals, to swallow it again for a second digestion. It is the only surviving monkey species in the wild that eats its food twice. It shares a symbiotic relationship with special bacteria in its tummy, which help it re-digest its food in the complex, cow-like chambered stomach. Swimming ability of the proboscis monkey

The proboscis monkey is an agile swimmer, quite unlike its other counterparts and has evolved over the years, possessing partially-webbed feet, a lot like ducks, for a faster swim. This helps it escape its predators in the rivers. The webbed toes help the monkey to swim for a longer period of time and cover longer distances. The monkeys wade across the rivers in an upright position and are bipedal in nature.

The unusual noes of proboscis monkey

As per joint studies in Kyoto University, Cardiff University and Sabah Wildlife Department in Malaysia, biologists say that the elongated noses of the proboscis male monkeys are ornamental tools to attract a female. The odd-shaped noses that hang down their mouths also serve as attractive features, which a female monkey takes very seriously and for which, she can even change her group. The enlarged nose is also used as a horn to threaten other dominant males, who try to lure away their potential mates. Scientists believe that the proboscis monkeys use their peculiar noses to honk and roar so as to intimidate other males, while their nasal cavity also helps in amplifying their mating calls, which largely impress females.

Although the proboscis monkey species are protected under the Sabah Wildlife Department, they are endangered and their population is fast declining. Their habitats are slowly depleting. The extensive clearing of vegetation in the rain forests of Borneo for logging, unchecked human settlements, poaching and illegal trade of these unique monkey species and other such activities have pushed the monkeys to the brink. Even natives in the forests that hunt the proboscis monkey for its flesh, which they consider an exceptional delicacy, has put the monkey population in jeopardy. Declining by almost fifty per cent in the last forty years, these monkeys are also used in medicinal preparations in China, which has put them at a greater risk.

The palm-oil planters that are mostly active near the riverbanks and mangroves are posing the greatest threats to the unique Borneo monkey. The palm plantations are eating into the proboscis monkey habitat, which has brought down their population very sharply. The IUCN Red List has declared the proboscis monkey an endangered species and conservations have now come up with plans to save their populations.

Although the rare proboscis monkey has achieved an iconic status in the world and is quite popular among tourists like the orangutan from the same region, its survival is at risk. But there’s still hope for the primates, which not only give a strange feeling at their first sight but also make us marvel at the hidden gems nature has in store for all of us.

Enjoyed this article? Also, check out “The Silky Anteater: The Nocturnal Dweller of the Tropical Rainforests“.