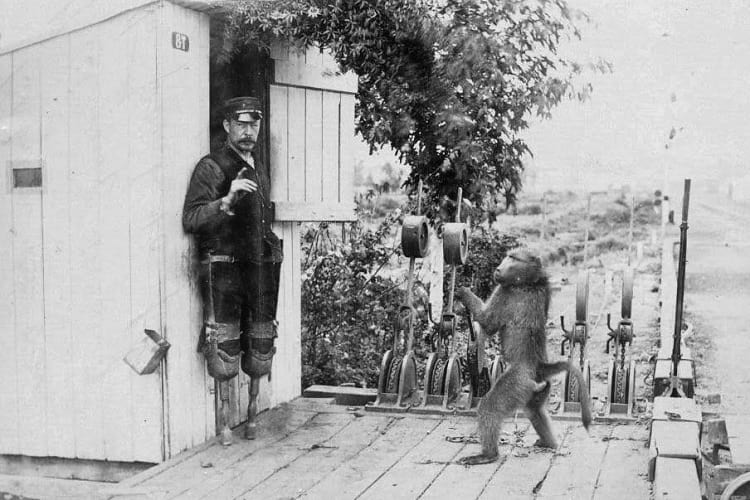 In 1890, Nature science illustrated weekly science journal published an article about a recently deceased chacma baboon named Jack. Chacma baboons are native to South Africa, Angola, Zambia, Namibia, and Mozambique, and are social animals with dog-like faces and high levels of intelligence. Jack the baboon displayed every evidence of this, and, in his nine years of service with the Cape Government Railways, remained an exemplary employee.

Our story begins with James Wide, who, for 10 years, worked as a guard with the Cape Government Railways. He earned his nickname ‘Jumper’ because of his penchant for jumping on and off moving trains. It was a risky habit and it was bound to land him into trouble sooner or later, and so it did. In 1877, he failed to gauge his jump correctly and slipped on a coach canvas covering and fell onto the rail tracks. The 80-ton coach that was following went over his legs, severing them just below the knees. The railway workers rescued James Wide and he survived, but with the loss of both his legs. He was a resilient fellow, however, and decided to make the best of a bad situation. After he had recuperated, he made himself a pair of wooden pegs and learned to walk on those.

He then pleaded with the Cape Government Railways to give him some other employment that would allow him to continue working with them. Being sympathetic to his plight, they gave him a post as a signalman with the Uitenhage railway station. Being a signalman entailed conveying track information to the train drivers and operating levers to change tracks to accommodate the passing trains. It was work he could do from a chair, but he did often have to get up and go out to give train drivers the key to unlock the points that allowed the train drivers to reach the coal shed. For this, the driver usually blasted four whistles as a signal, and then waited for James Wide to hobble over to him.

Aside from this, James Wide also had to travel back and forth from the cottage that the company had provided for him to live in. It was about half a mile away from the signal station hut. To save travelling time and his own energy, James Wide had devised a trolley that he could operate to take him to work every morning and back from work later in the evening.

This regimen worked for a while, but then he began to find it tiring. There was a somewhat steep hill between the cottage and the signal station hut. It was hard work using levers to pull the trolley both ways.

James Wide began to see the necessity for having an assistant. 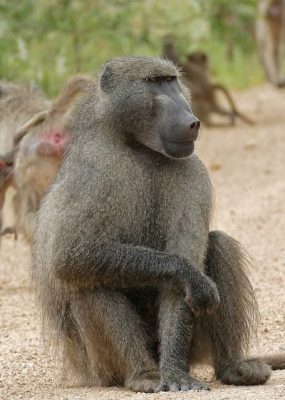 In 1881, on a visit to the local Uitenhage market, where hunters, merchants, and transport drivers regularly gathered for commerce, James Wide saw an unusual sight that made him pause in his tracks. An oxen wagon passed him and leading the oxen team as the voorlooper or oxen leader was a chacma baboon. The animal radiated calm confidence and seemed to know what he was doing. Amazed, James Wide sought out the oxen-cart owner and inquired about his extraordinary baboon. The owner told him that he called the baboon Jack and he was indeed an extraordinary creature. He had taught him several basic commands and Jack had quickly learned to handle the oxen wagon. With his great physical strength, he was also tremendously useful in pulling and pushing heavy loads.

Wide immediately knew that he had found his future assistant. He asked the man to let him have Jack, and the man, either moved by Wide’s disability or the high price he offered, let him take Jack with him. In parting, he told Wide to give Jack a shot of Cape Brandy at bedtime every night. Without the nightcap, he said, Jack was liable to grow morose and ill-tempered and would refuse to work the following day.

How Jack the Baboon became a railway signalman

To begin with, Wide taught Jack the baboon to push his trolley from his home to the signal station hut and back from there. Jack was happy to do the pushing and was particularly happy about the trolley trundling speedily down the incline. He liked to jump onto the trolley at this juncture and enjoy a fast ride downhill. In addition to manoeuvring the trolley, he learned to take it off the tracks when necessary and then put it back as well. Through their regular interaction, James Wide realized that Jack was much more intelligent than he had first thought. Jack watched his actions carefully and began emulating them. He noticed that on hearing the four signal whistles from the train engines, Wide would go out to hand the train driver the key that opened the points that led to the coal shed. One day, when a train driver blasted the four whistles to let Wide know he wanted to load the coal, Jack seized the key before Wide could and ran over to hand it to the train driver. It must have startled the train driver no end, but Wide discovered that there was one more task he could entrust to Jack.

Soon after this, since Jack was showing such a great interest in the signalling work, Wide began training him to operate the signal levers according to the different whistles from the train drivers. These levers controlled certain sections of the railway tracks and had to be pulled in a correct order. Jack the baboon proved to be a very quick learner and was soon able to operate the levers on his own. Wide tested him a few times and Jack responded correctly to the signal whistles and changed the right tracks every time. He did not err even once in this task and he showed a tendency to recheck his work and to look at Wide to be assured that he was doing everything right.

At the station, the train drivers and the other railway employees soon became accustomed to seeing Wide and Jack working together to operate the signals. Amused passengers threw food at Jack as their train chugged along.

A lady complains about Jack

Jack the baboon settled down to his work, but everyone wasn’t amused by the sight of a baboon working the railway signals. A high society lady, who happened to be travelling to Port Elizabeth, saw Jack working at the Uitenhage station and grew indignant that a baboon could oversee matters that might affect her personal safety. She complained vociferously to the railway authorities in Cape Town. They hadn’t received intimation about their baboon employee and they refused to believe her at first. Nevertheless, to check up on things, they dispatched a system manager and an inspector to Uitenhage station.

When they saw that matters indeed stood as the lady had said, their first reaction was to fire Wide and tell him to take his baboon with him. Wide, however, pleaded with them to reconsider and his fellow employees voiced their support for both him and Jack. The baboon was the best employee the railway had, they claimed.

The manager was, of course, very sceptical, but since he had come all this way and he found the whole scenario amusing, he decided to indulge Wide and his supporters and see Jack’s skills for himself. With the assistance of a train driver issue the signal whistles, he put Jack through several stringent tests. Jack passed all the tests with impeccable results and the railway manager was won over by his competence.

He reported the matter to the railway authorities and they reinstituted both Wide and Jack back to their former positions.

Jack became the first baboon to be ever officially employed by a railway in the entire world. He received a daily wage salary of 20 cents and daily rations, and, on Saturdays, he got a bonus of half-bottle of beer and snacks. It became a common sight on Saturdays to see him seated near the cottage door sipping his beer with a great deal of pleasure.

He remained employed with the Cape Government Railways for the next nine years and, reportedly, never made a single mistake in his entire career.

He also became the railway company’s major star attraction, and tourists came from far off places just to see him operate the signal levers. Jack showed himself to be a great believer in the sanctity of work. He not only did his signalling work well, but he also volunteered for other jobs. He worked in the station garden when he could, gathered discarded railway sleepers for firewood, swept the kitchen floor in the cottage, and took out the rubbish. He was also a dedicated guard and did not allow anybody to trespass on the railway premises.

In 1890, he contracted tuberculosis and died shortly afterwards. James Wide was devastated at this loss. They had lived together for nine years and he had grown very accustomed to Jack’s presence and relied on him both as a co-worker and as a companion.

The news of Jack’s death spread and his story, when published in Nature magazine, garnered a great deal of interest. Jack the baboon was gone, but not forgotten and, thanks to his fame, even some of his remains remained. You can see his preserved skull in Grahamstown’s Albany Museum.