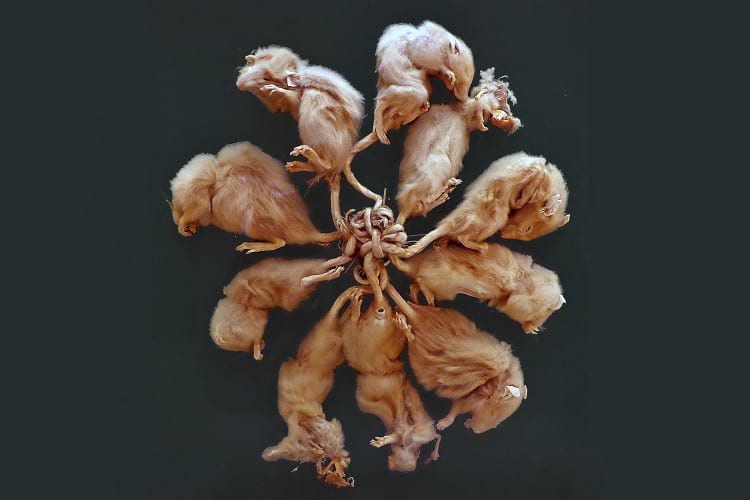 A visit to the Mauritianum Museum in Altenburg, Germany might give you an absolute shudder of fear and revulsion at the spectacle of a mummified assembly of 32 rats conjoined at their tails and forming a large entanglement of a gargantuan turbo-rat.

The phenomenon popularly coined as the “rat king” survives in its malformed and outrageous intermixing until being killed or devoured by a predator. Surely rat kings are not like the cute and lovable pet rats in a go-as-you-like contest. In actuality, whatever we are aware of rat kings is the stuff that all bad dreams are made of.

The earliest sightings of a rat king (25 rats) happened in the year 1564 and predominantly from Europe in countries like France, Netherlands, Poland and Belgium. Germany though was a specific hotspot, for no good reason. The disparaging German term “Rattenkonig” was plentifully used all through the next couple of centuries to denigrate people who were looked upon to be parasites.

Back in those days, rats were vilified as the harbingers of plague. They had been condemned for the devastating Black Death that originated in Medieval England and killed nearly 1.5 million people.

The occurrences might have plummeted with the displacement of the black rats (R. rattus) by the brown rats (Rattus norvegicus) sometime in the 18th century. Most existent specimens of rat kings are found to be formed from black rats or ship rats. Moreover, the happenings of black rats forming rat kings are widely documented all over the world. The only other small mammal species to have exhibited a kindred phenomenon are the squirrels.

Rodent experts refuse to acknowledge the theory of the rat king, claiming it to be only a myth. However, there is a possibility that a huddle of ace and clasping tails could get themselves entwined. With the presence of a binding substance like sebum, which is oily and sticky and gets secreted from the skin of the rats, the knot might become inseparable. Even urine or faecal matter could have aggravated this fusion.

A rat king is on display at New Zealand’s Otago Museum. It was discovered in the 1930s by some clerks at a shipping facility when a mass fell onto them from the overhead roof beams. One clerk struck the twitching mass with a fork and killed it. The dead specimen eventually made its way into the museum where it is safeguarded in a big jar that contains the eight rats floating in a yellowish preserving liquid.

Another rat king is on display at Mauritianum Museum, Altenburg, Germany. The demonstration has an embalmed assembly of 32 intertwined rats. The specimen was reportedly discovered close to a miller’s fireplace sometime in 1828 in Buchheim, Germany. In a more recent sighting, a rat king consisting of 16 rats was allegedly discovered on 16th January 2005 by an Estonian farmer inside a pit. By the time he located the twisted interlacing, half of the rats were already dead.

In 2013, in a similar discovery, a “squirrel king” comprising of a dray of six squirrels generated a lot of hullabaloo in Saskatchewan, Canada. This time researchers blamed the pine tree sap juice as the fixative. The squirrels were unravelled by veterinary doctors. In 2018, five squirrels that were chanced on connected by their tails in Wisconsin were successfully separated by veterinarians.

How do rat kings form?

If conjectures about the real existence of the rat kings are to be trusted, rats simply conjoin together while getting confined in a little space like a burrow or congested dwelling quarters. Another theory surmises on the rodent cohorts attempting to keep themselves warm during the winter season and thronging together thereby yielding the union. Although the sightings of rat kings are debatable to a certain measure, the notion that the tails of an army of rats could get adjoined and entangled is true. As mentioned earlier, the sebaceous glands ooze a glutinous binding agent to keep their skin moisturised. The substance also enables their steady and fast movement amid the tight confines by greasing up the surfaces. The tails remain equally hydrated and ultimately become shackles for the rats thriving in the close vicinage.

Sometimes dirt, blood, urine or faeces are also believed to jointly bind the tails. Also, black rats can climb up and hence their tails have enhanced grasping ability which engenders a strong collaborative hold inside their nests.

Enjoyed this article? Also, check out “Goblin Shark: The Alien Shark of the Deep Sea, with a Slingshot Mouth“.