The Silky Anteater: The Nocturnal Dweller of the Tropical Rainforests

If you ever visit the tropical rainforests of Central and South America or Trinidad, you may want to scan the canopy of the towering trees and try to spot a silky anteater. The chances are high that you won’t see one, certainly not during the day. You might get lucky at night-time though and see one of them clambering from branch to branch in search of food. Silky anteater are nocturnal creatures, and they also prefer travelling across the tree canopies rather than descending to walk on the ground.

In 1758, the Swedish naturalist, Carolus Linnaeus, gave the silky anteater its Latin name, Cyclopes didactylus. The translation is circular feet with two toes. The silky anteater clings to branches by circling its limbs around them. It also has two large and sharp claws on each of its forepaws. 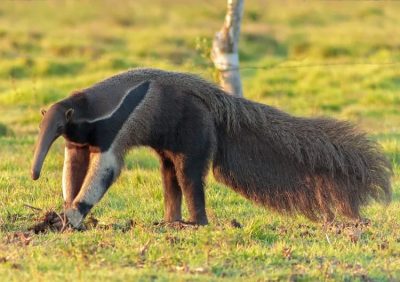 The silky anteater belongs to the Vermilingua suborder. This suborder includes other anteaters such as the Giant Anteater (Myrmecophagatridactyla), the Northern Tamandua (Tamandua Mexicana), and the Southern Tamandua (Tamandua tetradactyla). Vermilingua, incidentally, means worm tongue in Latin and refers to the anteater’s long, narrow, and sticky tongue that it uses to gather up ants. As you might have guessed from the name, these are the anteater’s main food.

Species of the silky anteater

Habitat of the silky anteater

You will find the silky anteater in the tropical rainforests of Central and South America. Their habitat ranges from Oaxaca and Veracruz in southern Mexico to Brazil, Peru, Panama, Bolivia, and Ecuador. Silky anteaters with golden pelts occur on the north side of the Andes, while the darker silky Anteaters reside on the south side.

The silky anteater also lives in Trinidad, and the local people call it ‘Poor Me One.’ Apparently, the locals mistook a forlorn bird cry to be that of the silky anteater and assumed it was bemoaning its lonely status. The silky anteater is a rather silent creature in general. However, it is capable of uttering high-pitched and shrill shrieks in adverse situations.

The silky anteater is a protected species, but researchers don’t consider it endangered. Its environment, however, is under threat from human activities.

Physical characteristics of the silky anteater

Also known as the Pygmy Anteater, the silky anteater has a thick, silky pelt that can range in colour from golden to brown to grey. There is a stripe of a darker shade on its back, running from the shoulder to the rump, and the coat on the underside may be of a paler hue.

It weighs up to 500 grams and measures around 45 centimetres in length. It has a prehensile tail – that is, a tail that can be used to curl around and hold onto branches and other objects – that extends its length by another 26 centimetres. It possesses a short snout, large black eyes, tiny ears that are well-hidden within the thick fur, and red soles. 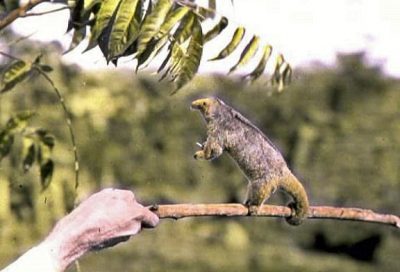 Behaviour of the silky anteater 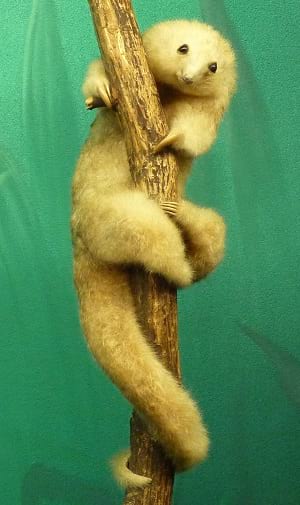 A stuffed silky anteater in a museum. (Totodu74 / Wikimedia Commons)

When it feels threatened, the Pygmy Anteater rears up on its hind legs and holds its front paws before its face like a boxer. The idea is to punch and puncture the would-be attacker. It is not a good defence. The silky anteater is a peace-lover, not a fighter, and it is also a slow-moving creature. If spotted by its principal enemies, Harpy Eagles and Hawks, it is, unfortunately, an easy victim. The birds swoop down and grab it, not giving it a chance to defend itself.

To protect itself from these predators, the Anteater often hides in silk cotton trees. It is preferable than getting into a fight. The pods of these trees have thick fibres that resemble the pelt of the silky anteater, and this makes camouflaging itself in these trees easier.

To return to the topic of the claws, you would think that they might be a hindrance in walking on the ground. The silky anteater, however, turns them inward and walks on the sides of its feet. Since it doesn’t walk on the ground too often and certainly not over long distances, it works out well. If it has to travel far, it does so across the tree canopies. Males have larger ranges than females. They forage and live on their own, but their ranges can overlap. Silky Anteaters breed twice in a year, and the females give birth to one young one at a time. Both parents care for the baby and, carrying the baby on the back, move them from one tree hollow to another almost daily to keep them safe from predators.

The silky anteater’s claws and the prehensile tail are convenient for climbing trees and anchoring itself to branches while it eats. The claws can also break anthills, ant nests, and branches to get the insects. From sunset till dawn, it can devour up to 8,000 ants. It uses its long, thin tongue, which has spikes and mucus, to gather up the ants. In addition to ants, it eats termites, beetles, and fruit. The tongue is also useful for licking moisture from leaves. Despite all the feeding, according to researchers who took the trouble to find out, the silky anteater only has one bowel movement in 24 hours.

When it’s done eating, defecating, and hiding from predators, the Silky Anteater curls up into a ball in a roughly made nest of leaves and sleeps during the day.

Enjoyed this article? Also, check out “Proboscis Monkey: The Rare Borneo Monkey Species with an Unusually Long Nose to Lure Its Females“.

Previous Article
Saint Pierre and Miquelon: A French Territory in North America and the Last Bastillion of New France
Next Article
The Curious Case of Charles Coghlan’s Coffin