Mapogo Lions: The Six Legendary Lions That Meant ‘Bloody’ Business in Their Quest for Dominance 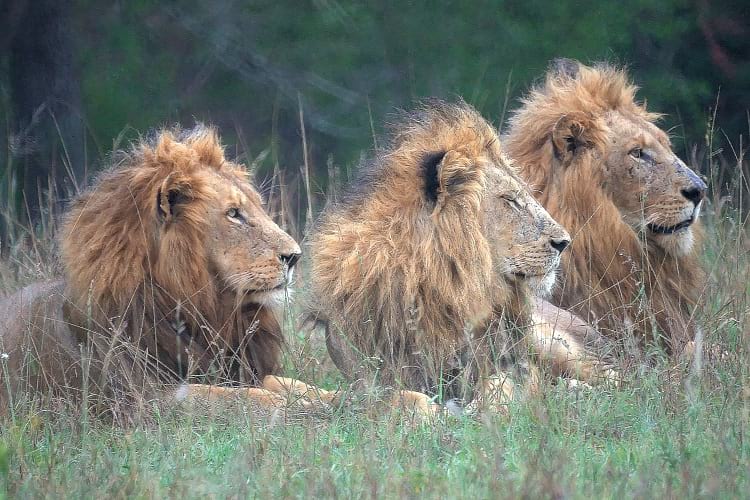 Mapogo lions looking at a herd of buffalo, circa 2011. (Mike’s Birds / Flickr)

A lion is not called the King of the Jungle for nothing. These large animals belonging to the cat family are not just exotic, magnificent beasts but also one of the most formidable hunters of the wild. Living in groups called prides, there was once a legendary union of six male lions that invoked terror in the lands during their prime. The Mapogo Lions of Sabi Sand Reserve in South Africa was a terrorizing group that kept other lions in the region away from their territory. And to keep competition off, these animals killed as many as hundred lions to stay on the top.

The early story of the Mapogo Lions

Born over a period of time in the Sparta Pride in Sabi Sand Reserve, adjacent to the Kruger National Park, five young lions had a playful youth like their other counterparts. As per written records, these lions came into their own in March of 2006, when their reign of terror had just begun. Animal observers named these Mapogo lions after their distinct characteristics. Kinky Tail was named so because he had a tightly curled tail. Satan or Mr. T, the violent of the lot, had a mane groomed in a natural Mohawk style. Pretty Boy was named so because he was obviously more pretty-looking than his brothers. Rasta and Dreadlocks were named after their specifically-styled abundant manes. After the pride lost a young male cub, Makulu (meaning big in Zulu) – a four-year-old – joined in without resistance from the others.

It is said that this band of six brothers stayed close to their pride as cubs, but when they reached their youth, they were abolished so that they could begin a life of their own. But the fact that surprised many biologists was that these young lions did not leave each other’s company at all, rather they hunted together, lived together and reigned terror during their prime.

After the six lions formed a coalition, they began hunting to feed themselves. A wild buffalo was their first kill and they slowly graduated to killing giraffes, which is supposedly not an easy catch even for the mighty lions. But what set this coalition of brothers apart was their cannibalism, which baffled researchers and animal behaviourists. In their quest for dominance, they did not leave behind any living lion, lioness or cub, who could possibly take over their supremacy. Divided into two groups, these Mapogo Lions dominated the northern and southern territories of the Sabi Sands, keeping away competition from their fellow lions. Rasta, Dreadlocks, Makulu and Pretty Boy formed one band, guarding the southern sides, while Mr. T and Kinky Tail, the inseparable duo, watched out for the north.

The beginning of cannibalistic behaviour

During their reign, not a single lion from other prides could enter their territory and if any beast tried to intrude, it was killed instantaneously. Labelled as sadistic and ruthless, these six coldblooded lions were a formidable force that wiped out entire prides only to stamp their supremacy in the region. What came across as unnatural behaviour was when field guides and rangers saw that these lions killed their own cubs to eliminate future competition. But that was not the end of their brutal behaviour. These lions fed on the flesh of their dead cubs too! And that was just the beginning of their vicious activities.

Once a young male lion from Manjigilane pride tried to show his dominance, but Mr. T and Kinky Tail, in an act of defiance, tore apart the young lion, shattering his pelvic bones and then ate away the soft flesh of its underbelly. Wounded and tired the two dreadful brothers continued their cannibalistic behaviour and same was the case with the other four lions that guarded the southern territory. In just a year, these six brutal brothers took down a hundred others of their own kin, including females and young ones to prove their power in the land.

End of an era

It was in the year 2010 when a new pride of Manjigilane lions had tried to take control of the Sabi Sands, when the death of Kinky Tail was recorded for the world to witness. In a battle that lasted for hours, Kinky Tail was taken down in the same way; he and his ferocious brother Mr. T hunted all their lives. The young lions tore Kinky Tail’s body apart and left him to die, leaving Mr. T almost orphaned. The lone lion then moved towards the south to be with his four other brothers, who by now, had prides of their own.

In the next few months, these five lions managed to keep off competition, mate and take over new prides, but their reign had eventually started to come to an end. Rasta was the first to be killed in July 2010 by a young Manjigilane coalition in an intense fight. Dreadlocks went missing in the same year after he did not return from a night stroll. Some believe that poachers could have killed him or he was taken down by another coalition of lions. Mr. T was killed by the Selati pride in March 2012 in the same way as Kinky Tail was killed by a group of young males – ambushed and subdued. Makulu died during a confrontation with males of the Kruger pride in January 2013. Nobody knows for sure what happened to Pretty Boy or how he died, but rangers speculate that when he was last sighted, he looked thin and weak and could have died of starvation.

Ruling with an iron paw between the years 2006 and 2012, this extremely rare coalition of six cannibalistic lions, reigned terror and wiped out prides that posed a threat to them. Despite the area ruled by eight other prides during their time, none stood a chance at dominance for they were dealing with an aggressive and brutal lot of lions that was never seen before in the wild, killing and eating their own kith and kin. This band of five brothers and one half-brother has an entire documentary filmed on them titled ‘Brothers in Blood: The Lions of Sabi Sand Mapogo’, which proves how these legendary majestic beasts once ruled the wild.

Previous Article
Replica Constructions of World-Famous Cities and Towns in China: Tianducheng, Thames Town, and Hallstatt
Next Article
Terracotta Army: An Army to Protect the Dead in Their Afterlife