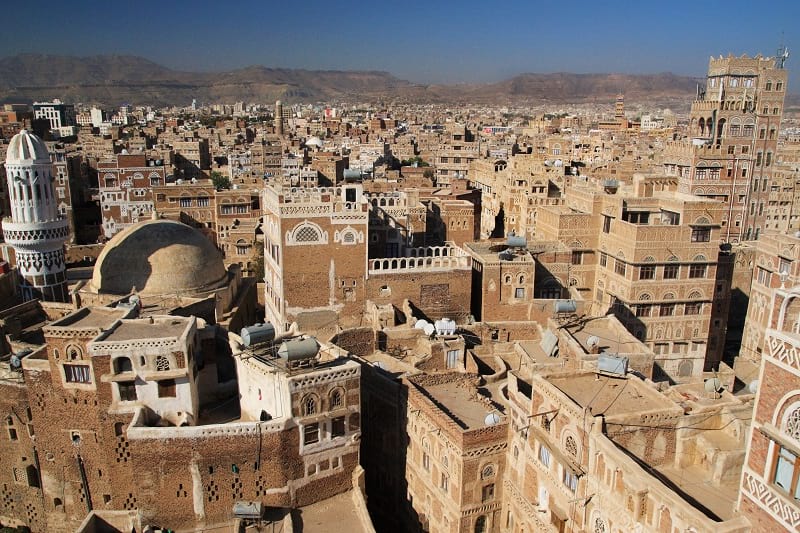 The geographical region between Northeast Africa and Southwest Asia is called the Middle East. It is verily called ‘the cradle of human civilization’ as it is the birthplace of the world’s earliest known civilizations. Yemen, with its city of Sana’a, is part of this ‘cradle’.

From 9th century BC to 6th century AD, Yemen saw rise and fall of several civilized states like Sabaean (pre-Islamic south-western Arabia mentioned in the biblical story of King Solomon and Queen Sheba), Awsanian (South Arabia) and Minaean (the ancient Yemenis who lived along the present-day strip of desert called Ramlat Dehem). Thanks to the spice trade, the principal vocation of people, these states were rich and prosperous. No wonder the Romans called them ‘Arabia Felix (Happy Arabia)’. Excavations reveal that the earliest human settlements in Yemen happened around 5,000 BC. The city of Sana’a is located 2,200 meters above sea level, across the mountains of Yemen. It is the oldest Arabian city, which is consistently inhabited for over 2,500 years. Famed as the heartland of Arabs, its 6,000 residential houses (built before 11th century), 14 hammams (bathhouses) and 103 mosques reflect the ancient Arabic architecture. Well-built mud houses and high rise brick towers on a stone base are signature landmarks. Fired bricks and white gypsum are used in making decorative designs. The overall town planning is thoughtful. The brownish colour of structures merges into the colour of earth and the mountain range. A medley of tall minarets, beautiful gardens, and rest houses adds to the spender of the city. Himyar kingdom, which lasted from 2nd century BC to 525 AD, was the last pre-Islamic statehood. Sana’a was granted the status of a ‘city’ in 2nd century BC. By 1st century AD, it was a key station on the terrestrial trading routes. From AD 525-75, it was ruled by Abyssinians (ancient Ethiopians) professing the Christian faith. The Christian influence on the city peaked from 527 to 565 AD in tandem with the reign of the Roman Emperor – Justinian.

The Great Mosque, planned & constructed in the lifetime of Prophet Mohammed, in 630 AD, contained several pre-Islamic relics. In the 7th Century, as Sana’a transformed into an Islamic state, the pre-Islamic relics were destroyed. Protection has been extended to the old city of Sana’a through Building law of 2002 and Antiquities Law of 1997. World heritage committee has suggested the building of a buffer zone around the old city. With the occupation of Egypt in the 1st Century BC, Romans made the red sea their principal route for business and trade. This weakened Yemen regimes, which depended principally on the land route for trading. Consequently, the Christian Abyssinians took over Yemen in the 4th and 6th centuries. In the later 6th century, the Sassanids of Persia governed Yemen, and in the 7th century, Yemen was ruled by an Islamic state. Following the rapid spread of Islam from Mecca and Madina–where it originated, Yemen was quick to embrace Islam and spread it into other countries as a front-line soldier.

Ottoman rule, founded by the leader of Turkish tribes at the start of the 13th century, gave a new lease of life to Sana’a. Islamic architecture was revived. It reflected loud and clear in the technique of ‘organizing the spaces’. The city was expanded in a big way, and its scenic landscape was enhanced. The houses and buildings were constructed from the material locally available and ensured living comforts and protection during exigencies. That’s the hallmark of Islamic architecture.

From the mid-17th to mid-19th century, Yemen remained virtually isolated from the rest of the world. In the early 20th century, Yemen was split into two states, north for Ottomans and south for British. Ottomans were forced to flee from Yemen following defeat in World War 1 in 1918 and after a series of upheavals, Yemen Arab Republic was formed in 1962.

The civilizations of Bible and Koran mingle seamlessly in the old city of Sana’a. In 1893, Aden (a port city of Yemen) was occupied by the British. With the end of Ottoman rule in 1918, and British rule in 1967, Yemen became a republic in 1990.

Enjoyed this article? Also, check out “Byblos, Lebanon: A World Heritage Site and the Oldest Continuously Inhabited City in the World“.