Also known as the Ennedi Massif, the Ennedi Plateau was declared a World Heritage site by UNESCO in 2016. The region exudes sheer beauty and boasts of exquisite rock formations that date back over seven thousand years. Through various excavation projects, it was found that humans occupied this area, as far back as the Neolithic period. This resulted in the discovery of several ancient rock paintings, engravings and mausoleums. 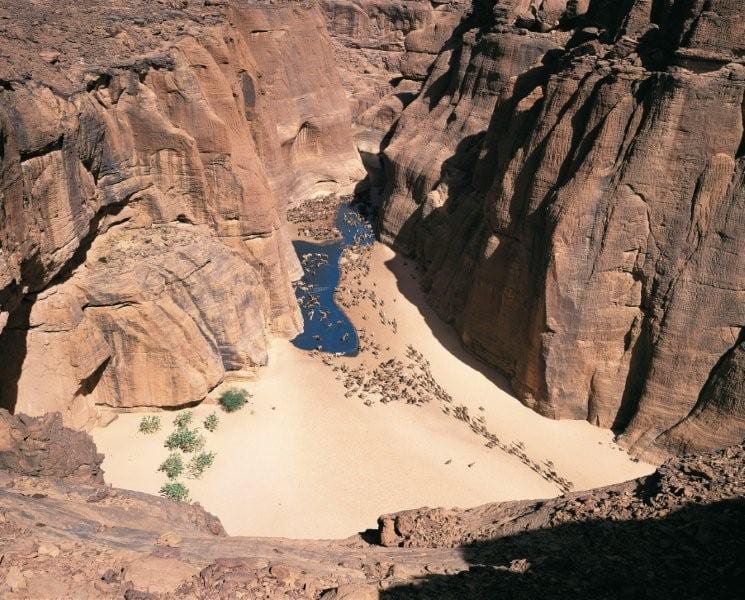 Camels arriving at a waterhole in Ennedi. (Wikimedia Commons)

In the northeast of Chad, the Ennedi Plateau spans over the area of Ennedi Ouest and Ennedi Est. While spanning over a large area of 60,000 square km, its highest point is at 4670 ft. above sea level. The Plateau is not just a simple land structure. It has various undulating landforms like towers, pillars, bridges and arches atop it. The Ennedi Plateau is a sandstone bulwark centred on the town of Fada. It is essentially a dry desert owing to its location in the Sahara region. Fauna of the Ennedi Plateau

One of the primary reasons for the Ennedi Plateau to be declared as a World Heritage site is the vast diversity of fauna that pre-existed and exists on this massive landform. Crocodiles were abundant in this region, once upon a time, and had certain characteristic features like dwarfism, which occurred because of isolation. Threatened by extinction, only a few of these species still survive in river canyons such as the Guelta d’Archei.

The last lions of Sahara became extinct in the 1940s. It is likely that any surviving animals like the Scimitar Oryx Antelopes and the Sudanese Cheetahs may still be found in the sparsely populated areas of the Ennedi Massif. It is also rumoured that a supposed surviving ‘sabre-tooth cat’, also known as the Ennedi Tiger, maybe living there.

Poaching has been prevalent in the Ennedi Natural and Cultural Reserve which has led to a huge decline in the wildlife in the area considerably. There are one hundred and ninety-nine species of birds that utilise the Ennedi Plateau as a migratory crossroad.

When soft rock material gets eroded away by natural agents like wind or water, they form ‘natural arches’. These agents work on worn out rocks susceptible to swift erosion. Sensitive areas include rocks in caves, coastlines, and also areas which have water running through them. Areas that have low frigid temperatures or high-velocity winds that weaken the rocks are also prone to the formation of natural arches. The Aloba Arch in Africa is an example of such a natural arch. Other famous natural arches can be found in Arch Islands in the Falkland Islands, Natural Bridge in Virginia, USA, Natural Arch in Tirumala, India, and the Arches National Park in Utah in the US.

The Aloba Arch is a natural arch in Chad and is a product of the Ennedi Plateau. Large natural arches are uncommon outside the Colorado Plateau of the United States of America and the southern and western areas of China. The Ennedi Plateau in Chad is situated in the north-eastern region, which is near Sudan and Libya. The geological formation of this plateau is strikingly similar to the Colorado Plateau which is in the southwest of the United States. Perhaps the presence of the Aloba Arch echoes these similarities . 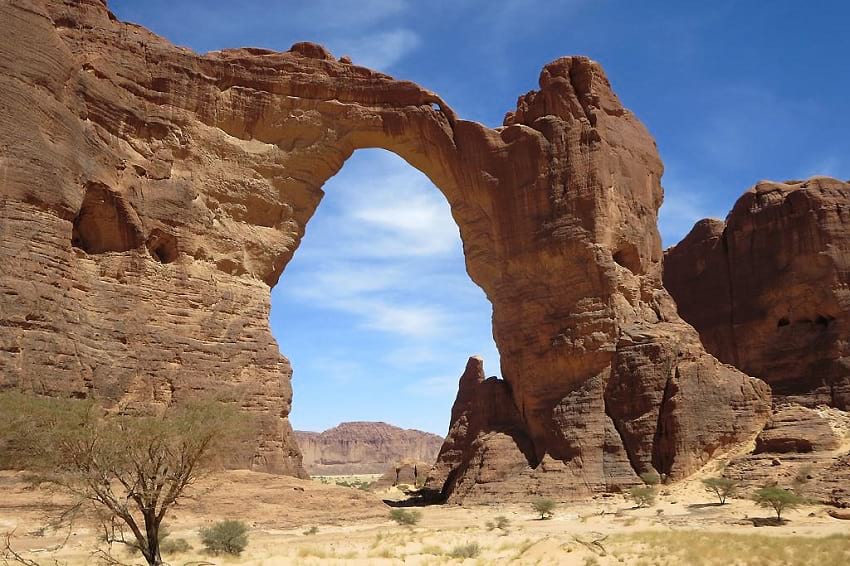 A massive landform, the Aloba Arch stands tall at a height of 394 ft towering over most natural arches. It also claims the distinction of being the eighth longest natural arch in the world. A two-stage formation took place for the creation of the magnificent Aloba Arch. In the first stage, the upper half of the arch was formed at the end of a fin of a sandstone. The result was a natural ‘buttress type’ arch. The lower part of the arch was formed in a softer layer of sandstone, which was eventually eroded by a stream. Consequently, a type of meandering natural bridge was created. This portion is approximately 150 ft higher than the Rainbow Bridge in Utah.

The native people of Ennedi

The natives of this area are a scarce population of semi-nomads consisting mainly of Muslims speaking the Dazaga dialect. While they live in permanent villages in the rainy season in the months of July-September, they disperse for the dry season. Even after Chad’s independence in 1960, Ennedi remained under the military administration of the French till 1965, as the land was thought to be ‘ungovernable’. The French withdrew thereafter upon being requested by the people of Chad. The plateau is an important resource for the semi-nomadic groups to sustain their livelihood. Their requirements of pastures for the grazing of their cattle, and water, both for themselves and their livestock are met here. With cooperation, an amazing opportunity presents itself to help conserve this world heritage site to support its people and wildlife. Through constant interaction with the locals, it is possible to deliver effective management, law enforcement, and infrastructure. Even the re-population of several significant animal species that have irreplaceable cultural and natural value, is perhaps possible.

The vandalism of Ennedi cave paintings

The cave paintings here depict animals and communities of people living on the plateau and are one of the largest collections of ancient rock art. This priceless structure has however been systematically defaced by the locals over the years. This act of vandalism has severely mutilated the cave paintings. According to reports by BBC, the locals wrote their names in French and Arabic to deface the paintings. 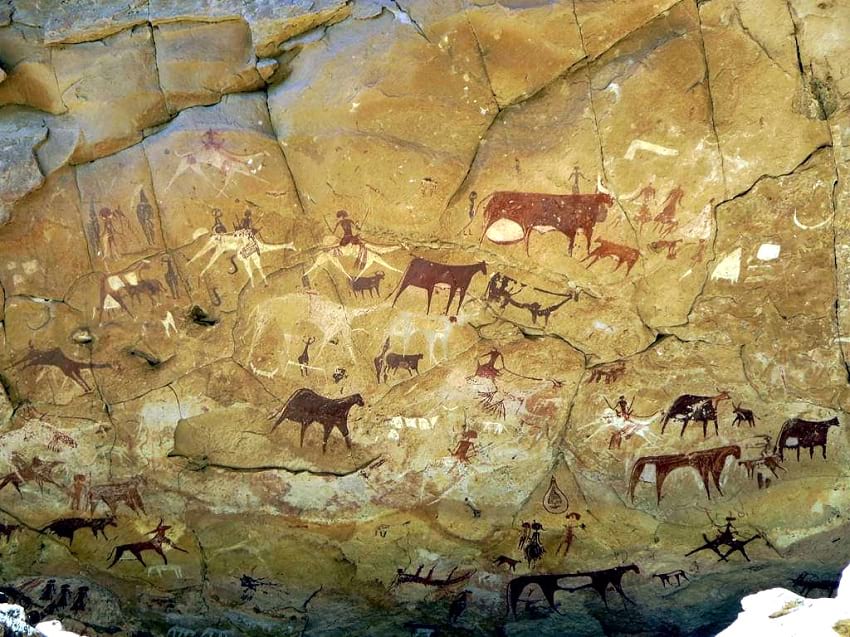 The cultural minister Mahamat Saleh Haroun refers to the vandalism as a “tragedy”. To assess the damage, experts were sent to the location. According to the UN representative for culture in Chad, Abdel Kerim Adoum Bahar, the paintings can be restored.

Enjoyed this article? Also, check out “Penitentes – The Remarkable Ice Pillars of the Atacama Desert“.