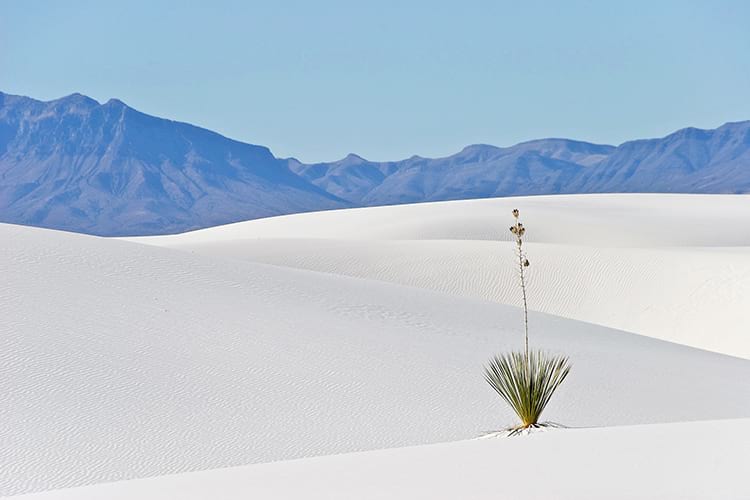 Sand, the all-pervading cover of dust on the earth surface, has always evoked sublime human emotions. It is revered and seen as a living example of nature’s compassion and infinite disposition. Technically it is defined as particles (granules) ranging in size from 1/16 to 2 mm. Depending on the composition, sand exhibits myriad colours like silvery, muddy, black, green and even pink. At one particular place, it is white. The place is White Sands National Monument at New Mexico.

The composition of sand is decided by the nature of constituent granules which may be mineral particles, rock fragments or remnant of some life form. The major part of sand consists of a silicate mineral known as Quartz (SiO2). The rest of sand body is a mix of complex minerals (Sodium, Potassium, Calcium, Silica and Aluminium) called feldspars, with lithic (stone), biogenic and artificial (manmade) fragments. 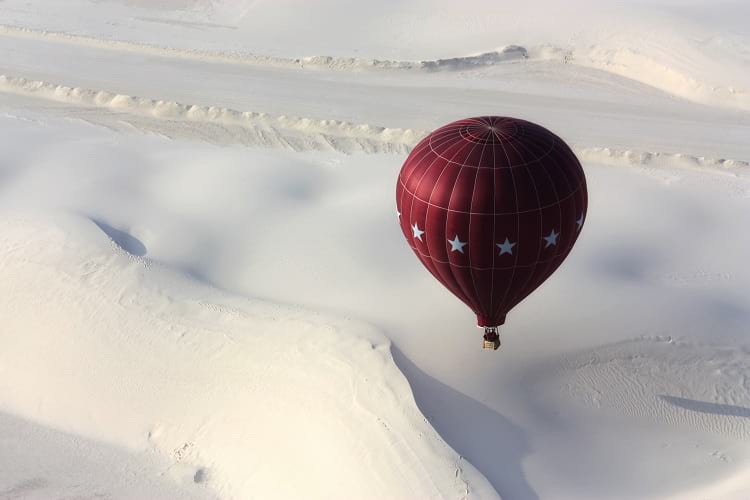 The white sands expanse at New Mexico consists entirely of pure Gypsum, hence appears white in colour. Sand otherwise, and generally, is devoid of Gypsum (Calcium Sulphate Di-hydrate) because gypsum is soluble in water and anything which is soluble in water, can’t remain in the sand for long. The climate at New Mexico is generally dry, and water here from having no escape route to the sea, gypsum dissolved in rainwater stays put in the sand. As water evaporates in course of time, dissolved gypsum dissolved again precipitates in pure form and becomes part of undiminishing white sand. Repeated exposure to freezing and thawing disintegrates gypsum crystals into tiny grains, forming a wide stretch of gypsum dunes over about 715 square kilometres of south-central New Mexico. The scenic beauty has an eerie nuclear holocaust connect

Extremely scenic and mesmerising, white sand gives a feeling of being in a different world. A major part of the expanse lying outside the boundaries of the national park/monument is notified military testing area for the US Army. Verily called White Sands Missile Range, world’s first atomic bomb was tested in this range, 65 miles north of the National Monument, on July 16, 1945. Weeks later, Hiroshima and Nagasaki were nuked.

White sand formation in the area began some 250 million years ago when shallow Permian Sea pervaded the present day New Mexico. In time, the sea water receded and gypsum precipitated on the dry bed. Mounds of gypsum thus collected mingled with rocky mountain formations some 70 million years ago. Tectonic shifts in earth’s crust, about 30 million years ago, transformed the region into a depression called the Tularosa Basin. The Basin became a repository of gypsum washed off from the mountains around.

During the ice age, 12000 to 24000 years ago, South West America had greater rainfall than it has today. So, Tularosa Basin became a huge lake. The lake dried up with the passage of time leaving a huge amount of gypsum in the basin. Some 6,500 to 7,000 years ago, gypsum took the shape of white sand dunes. The body of white sand at National Monument is still expanding. Some sand dunes move up to 9 meters away in a year. So, only that vegetation can thrive in this region as can put up with constantly shifting and moving sandbanks. 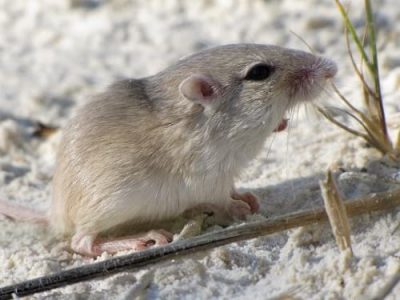 Harsh environmental conditions notwithstanding, the white sands ecosystem is home for myriad life forms. Among the animal species, there are pallid bats, subsisting on insects, lizards and rodents. The Apache pocket mouse, the endemic species of White Sand which can live without drinking water ever in its lifetime. All the water it needs for body functions is extracted from the ingested food. Kangaroo rat, the amazing survivor, with 8-inch tail in a total body stretch of 13 inches can jump up to 10 feet high in the air and fool predator with leg and tail work. Pocket gophers, the reddish, sandy brown to yellowish white rodents living close to sparse vegetation. Porcupine, the mammal with antibiotics in skin, inhabiting dense vegetation. The quick-footed Desert Cottontail, and the Black-Tailed Jackrabbit clocking terrific 20 mph and 40mph respectively. Kit fox, the largest nocturnal animal that lives solo, not in the pack. Badger, the short-legged omnivore living vegetation rich dune fields. Coyotes, the highly adaptable canine of white sands. Bobcat, larger than the domestic cat, scurrying over several miles of the White Sand. Over 220 species of birds and many species of insects and reptiles are also part of the White Sands eco-system.

Vegetation in white sand apart from having food and fuel value is used in several different ways. Rooting in perpetually shifting sand and thriving on salty and alkaline water, plants in this region are central to the life support system in the region. Creosote bush, the perennial 3 to 5-foot vegetation, at times reaching up to 10 feet, having a flexible stem, is the most characteristic flora. It has a pungent smell. The yellow, velvety flowers turn into fluffy white fruits. A resinous coating on its green leaves reflects sunlight to guard the plant against extreme heat. The bush is fodder for livestock. It is also used as firewood and medicine. Dyes, insecticide, fish poison and glue material are also prepared out of this vegetation.

Notable among other plants of the region are the following. Desert Willow, the 15-40-foot shrub with funnel-shaped pink and purple flowers, used in medicine and basketry. Fourwing Saltbush, with seeds surrounded by four winged capsules, hence the name ‘fourwing’. Its foliage has a salty taste. Hoary Rosemary Mint, the three feet tall aromatic shrub with silvery hair. It was used by the American Indians for seasoning of foods. Honey Mesquite, a food flavouring agent and a slow-burning smokeless fuel is used in medicine, beverage and stimulant broth. Mormon Tea or Longleaf Jointfir, a bamboo-like plant containing traces of ephedrine, a stimulant and decongestant. It is also used as dye material for wool. Rio Grande Cottonwood, with much of its trunk buried in the sand, is shelter for many bird species. Buds and flowers of this tree are edible and bark is also used as medicine. Rubber Rabbitbrush, the greyish green shrub with golden flowers is used for making a yellow dye. Skunkbush sumac, also called lemonade bush, produces red and orange berries and is used for making a lemonade-like beverage.

Tourists are attracted to white sands for the out-of-this-world feeling which they instantly get. The Sand appears cool even when the sun is at its scorching blast because gypsum is a natural insulator having low thermal conductivity. On the flip side, potable water is available only at the visitor centre. That’s a great disadvantage but has failed to deter visitors. A tragedy happened when and a couple and their 9-year-old son went on a hike without a sufficient stock of drinking water with them. The couple died of thirst on the Alkali Flat Trail. Their son, however, survived. As the monument is adjacent to white sands missile range, it is kept out of bound for visitors during missile testing and other military exercises. Yet accidents happen. Like an unmanned drone aircraft from Holloman crashing in the park and contaminating it with jet fuel and scattered debris. The accident happened 3 years back, but the contaminated area is still not spruced up to allow tourists in. 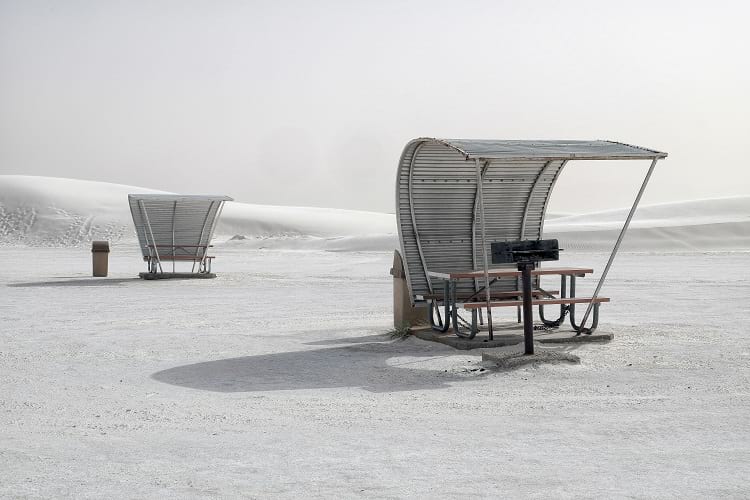