Wave Rock: Where a Massive Prehistoric Wave, Just About to Break, is Etched Permanently in Stone 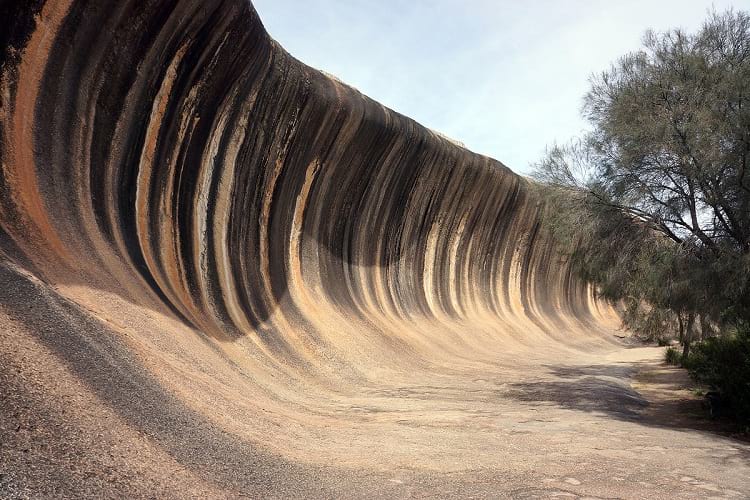 Australia is a land full of surprises. Right from being home to strange animals to unusually-formed natural structures, Australia has it all. There are so many naturally-occurring prehistoric formations in the country that an entire year’s trip Down Under wouldn’t be enough to check out all of those. Apart from the many rare structures found here, there’s one odd-shaped rock that has wowed more than half the world’s population in all these years. The Wave Rock in Western Australia, as the name suggests, is a unique-shaped, natural rock formation, which is a true beauty present in its natural form.

The appearance of the wave rock

One look at it and people are sure to imagine that a huge wave, just about to break, has turned to stone and frozen in time. But that is not the case in reality. Nestled close to the small town of Hyden in Southwest Australia, this rock formation, also known as the Hyden Rock, in the shape of a huge crashing oceanic wave is actually an inselberg. Rising straight out of the earth in isolation, this rock is estimated to be around 2.7 billion years old and made up of ochre, red and grey granite stone. 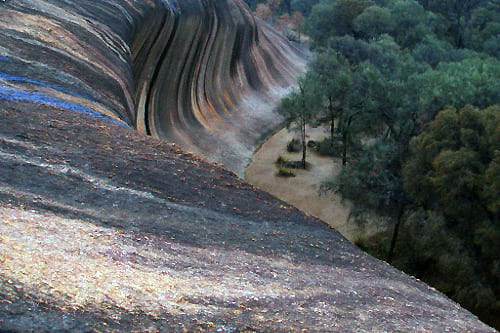 Around 300 kilometres from the southeastern city of Perth, the Wave Rock rises up to a height of about 49 feet and runs approximately 330 feet in length. The remarkable red, yellow and grey colours of the wave are a result of the minerals that have trickled down the slope due to the rains that keep lashing the structure over and over again. It is one of Australia’s most cherished natural marvels, which has kept geologists busy for years, studying its formation and rock composition.

How did the rock form into a wave-like structure?

Geomorphologists that have been studying the Wave Rock closely for years are of the opinion that the inselberg has taken a beating and suffered erosions over the centuries. This sedimentary activity has left nothing but a rounded projection hanging from above the cliff. What is more surprising is the fact that the wave formation is only on one side of the rock, which scientists have termed a flared slope. A flared slope is a stone or rock formation (mostly made up of granite) where the rock wall is solid on one side, while it is concave on the other side because of the damage suffered due to exposure to rough weathers over all the millennia. There are many other such examples of this kind of a structure in the world, but none is said to be as fascinating as the Wave Rock in Australia. 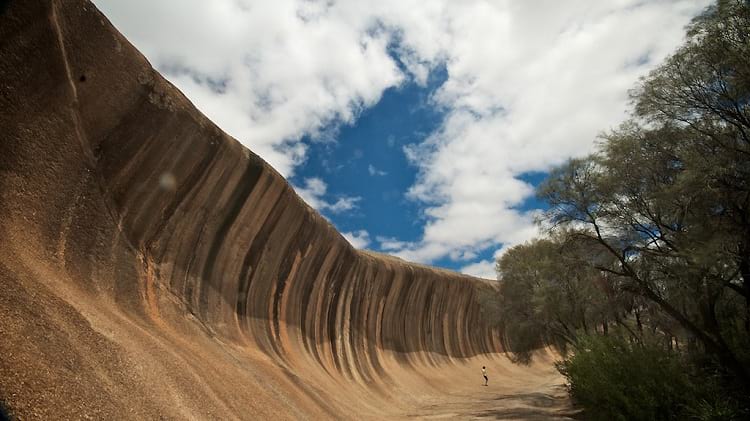 Dam on top of the Wave Rock

It is believed that the Aboriginals that set foot in the country, were the first ones to discover the oversized Wave Rock, but nothing more concrete is recorded about this part of the history yet. Although the Wave Rock is a natural surf-like formation, a stone wall was built on top of the gigantic rock in the year 1928 by the Australian Public Works Department to collect rainwater. Revamped in the year 1951, the method of rainwater harvesting on the dam served as the only source of water to the nearby dry areas and the stone wall on top of the Wave Rock, channelled towards a dam, continues to provide abundantly for the arid regions till date.

Other features nearby the structure

A variety of flora and fauna can be found near the Wave Rock. Wildflowers, an assortment of orchids, fame grevillea and particularly the acacia plant are very common to the area. A host of animals and birds, mostly endemic to Australia have also been spotted in the Hyden Wildlife Park, including wombats, kangaroos, emus, koalas and wallabies. The wildlife surrounding the Wave Rock is said to keep the area bustling with life and sounds.

One can even climb to the top of the granite wave to enjoy a panoramic view of the town of Hyden just three kilometres away from the rock. The awe-inducing shape and size of the Wave Rock pulls in a flock of tourists to this place every year. The astonishing Wave Rock is now a part of the 160-hectare natural reserve in the Hyden Wildlife Park, where visitors from all over the world come to witness an enormous wave just about to crash that might destroy everything in its path, had it been part of the ocean instead of stone.

Enjoyed this article? Also, check out “The Wave in Arizona: A Geological Wonder“.

Previous Article
Ushuaia: The World’s Southernmost City, Where End is the Beginning
Next Article
Space Debris: The Growing Hazard of Man-Made Debris in Space