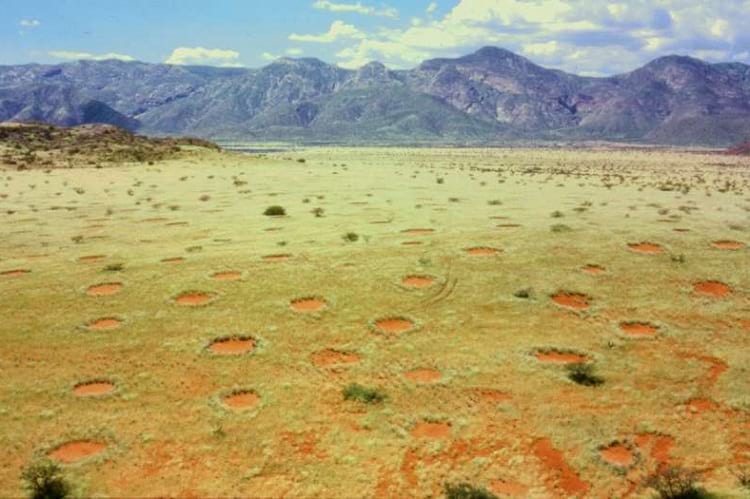 A strange phenomenon called fairy circles prevails the coastal desert of southern Africa also known as the Namib Desert. The desert is covered with innumerable circular patches of red coloured land, 2 to 15 metres in diameter, encircled with grass.

The entire region looks like a vast pockmarked land. This occurrence is a rare case only seen in the dry grassy area of the Namib desert, more commonly towards Namibia.

In 2014, similar circular formations were seen 15 kilometres outside the town of Newman in the native region of Pilbara in Western Australia. These rings of grassy vegetation are mainly found in dry parched areas that have a scarcity of water.

Scientists and researchers have debated over the cause of this phenomenon and various reasons have been suggested to satiate the curiosity of the mind.

Home of the fairy circles, the Namib desert

The Namib desert stretches for more than 2000 kilometres along the coast facing the Atlantic ocean in southern Africa. The word Namib in native Nama language literally means ‘vast place’. 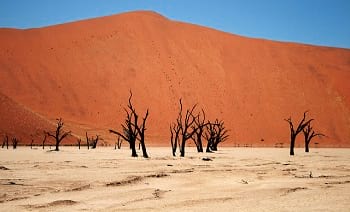 Having had desert-like conditions for approximately 55 to 80 million years, it may possibly be the oldest desert in the world.

The climate here is mostly hot and dry with an annual rainfall of less than 10 mm. Due to the prevalent conditions of the desert, vegetation is sparse. Occasional shrubs or grass are found from time to time, apart from certain plants that have adapted to the Namib weather.

In such an area, imagine coming across unending patches of circular grass. Not only was this phenomenon never seen elsewhere until 2014, but it has also intrigued botanists and researchers to the existence of the flora in such a systematic manner.

The occurrence of these circular patches spans a surface area of around 2400 kilometres. The fairy circles have been present for several years with the first mention in the technical literature of the 1920s. It wasn’t until the last 25 years of the 20th century when the fairy circles began getting observed for research work and study.

Millions in number, the fairy circles are found in the interiors of the desert, from southern Angola to the northern part of South Africa and strangely, no plant grow within these circles. The fables associated with it

The fairy circles have very interesting stories related to their existence. The native tribal Himba people believe that these are the footprints of God or other divine beings. 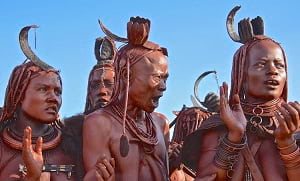 They make maximum use of the fairy circles, by using the grassy areas for pasturage and also for keeping young cattle safe. Wooden fences are constructed around the circular growth of grass where young cattle can be enclosed for their protection.

Another legend told by the native guides is that of a dragon living inside the earth. The fire that the dragon exhales prevents the growth of any vegetation on the land, and its breath causes circular patches.

The study, theory, and explanation over the years

After having studied the fairy circles for a long, long time, various explanations surfaced. Some of these were debunked by other scientists, whereas some were accepted due to lack of other concrete evidence.

One of the theories that surfaced in 1971 was by South African ecologist Ken Tinley. Tinley proposed in a scientific literature that termites are responsible for these circular formations. Research suggested that the massive stretch of fairy circles could not be termites as they are unlikely to spread so far.

Gretel van Rooyen, a Botany professor at the University of Pretoria in South Africa debunked this theory in 2004. According to van Rooyen, her team studied the fairy circles by digging them up for signs of termites or their nests. In spite of digging up to 2 metres deep, no termites or any evidence of their presence could be found. The other two theories were radioactive soil and the remnants of a poisonous milk bush plant. Rooyen and her team found no truth to the other two theories as well. They sent samples of the soil to the South African Bureau of Standards, the results of which, were negative.

To test the milk bush plant theory, her team collected soil from under the plant and also from areas where the milk bush plant had died. These were tested by growing desert plants in them and were found to be fertile, leaving the barren patches of fairy circles unexplained.

Researchers created a mathematical model in 2008 that pinned the probability of the pattern to the availability of water. 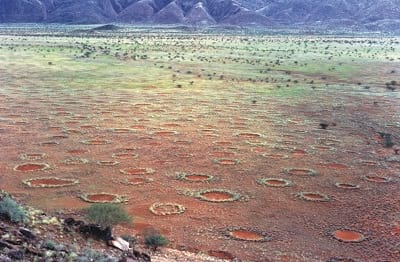 South African scientist, Eugene Moll started his study of fairy circles in 1989 and in 2012 stated that a certain species of the termite family was responsible for this formation. This theory was seconded by University of Hamburg Biologist, Norbert Juergens in 2013.

However, Florida State University Biologist, Walter R. Tschinkel who is also extensively involved in the study of fairy circles, disagrees. As per Tschinkel, termites may live under the circular patches but could not be determined as the cause of these formations. The question about the soil in the centre of the circles inhibiting plant growth again went unanswered.

Towards the end of 2013, University of Cape Town Biologist Michael Cramer teamed up with a colleague Nichole Barger from the University of Colorado Boulder for further study. They examined the occurrence, size, and density of the fairy circles. Their research and study were conclusive of the water availability theory.

According to them, grassy patches in deserts are formed due to the underground competition for resources between the plants. The barren patches are the result of surviving vegetation. Water and nutrients in the soil are used by the grass on the periphery, hence preventing any growth in between the patch. Also, the fact that this kind of a pattern is only possible in an area of limited water resource like the Namib Desert, where rains are scanty.

With theories galore about the fairy circles but none being conclusive, the need to gather and discuss on a larger platform arose. The first International Fairy Circle Symposium was held on February 27 & 28, 2015 at Wolwedans on the NamibRand Nature Reserve in southern Namibia. Though questions are still unanswered, people haven’t given up, yet.

There were 35 internationally renowned scientists and enthusiasts who attended the symposium to share their ideas and form some conclusive explanation. Unfortunately, there was no consensus on any one definitive theory. The Fairy Circles of the Namib Desert is still a mystery.

Previous Article
The Uplifting Story About the Life of Paul Anderson – The World’s Strongest Man
Next Article
Overtoun Bridge: A Mysterious Site from Where Dogs Leap to Their Deaths