The Wave in Arizona: A Geological Wonder 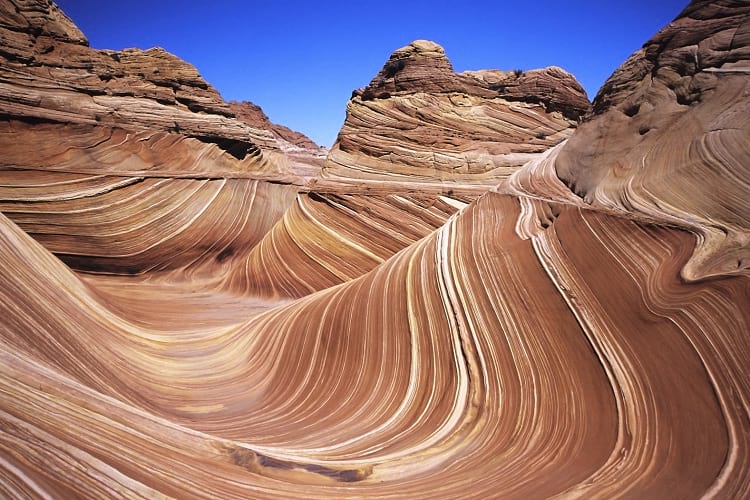 The Vermilion Cliffs National Monument is located between the two states of Arizona and Utah in the USA and boasts a fantastic landscape of mesas, buttes, and canyons. The most amazing feature in this area is the colourful sandstone rock formation on the slopes of the North Coyote Buttes. It looks like an ocean wave and that is why it is called the Wave. Ever since it figured in a German documentary film called ‘Fascinating Nature’, the Wave has become a popular tourist attraction.

How the Wave in Arizona was formed

The Wave’s origins go back to 145 to 200 million years ago, during the Jurassic period. At this time, layers of sand sandwiched laminae deposits made up of thin layers of sedimentary rock, organic tissue, and other materials. The sand lithified to form cross-bedded sandstone, and this sandstone compacted the laminae within it. The erosions in the sandstone have exposed rhythmic and cyclic alternating grain flow and laminae. These indicate how changes in wind patterns blew and settled sand in striations.

Compacted sand made of different grain sizes with each having a different resistance to erosion. This enables the formation of thin ridges and ribbing in the sandstone in the direction in which the wind is blowing. In some areas, the laminae are deformed, and researchers speculate that this may be on account of dinosaurs trampling on these laminae.

The Wave is a photographer’s delight. The contrasting colours of the multi-hued sandstone against the blue sky make a beautiful picture. It is best to take photographs around noon as there are no shadows at this hour. If you are lucky enough to visit after a rainstorm, you are likely to get some amazing photographs of the reflections bouncing off the numerous pools that form in the troughs.

You can visit the Wave all year round, but the most popular months are April, May, September, and October. There are comparatively fewer visitors during the winter months from December to February.

Visitor permits for the Wave

The Bureau of Land Management administers the Coyote Buttes area, and they provide the permits you need to enter the area. The permits cost $7 and you can get them in two ways, either through a walk-in lottery system or through an online lottery system. The Bureau instituted the lottery system to ensure that everyone who wanted to visit got a fair chance to obtain the limited number of permits. As the rock formations are rather fragile, they allow only 20 visitors per day.

The Grand Staircase-Escalante National Monument visitor centre in Kanab, Utah, dispenses 10 permits every day to people who come to the centre. There is no application fee. The permits are valid for the next day.

From November 15th to March 15th, they draw the lottery for permits on Friday, allowing you to visit on Saturday, Sunday, and Monday. You can avail of ten permits online four months in advance of the date of your proposed visit. The application fee is $5 per person or for a group of up to six people, and it is non-refundable. Each person in the group can apply only once a month and can select up to three dates. People who get a permit receive a notification to pay the $7 permit fee.

Hiking to the Wave

The only way to see the Wave up close is to hike to it. The hiking route to the Wave begins at the Wire Pass trailhead. It is located along House Rock Valley Road, a dirt road that is impassable in wet weather. Turn off Route 89 and drive for about 13.4 km to get to the trailhead parking space. From the Wire Pass trailhead, hike around 4.8 km across open desert to reach the Wave. Another entry point to the Wave is the Notch, but the route is not well mapped and it may not be safe to hike along it. 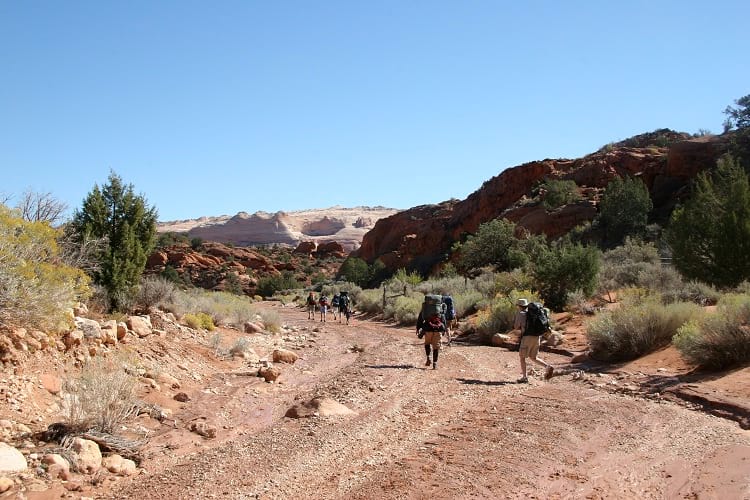 The hike from the Wire Pass trailhead is quite difficult too, and people have died while hiking there. The visitor centre provides a map and information about how to reach the Wave to people who have got permits. Along with the map, you will also need a compass or a GPS. If you have shaky navigation skills, you should hike with a group or hire an authorised guide. There is no cell phone service in the area, so there is no way to call for help if you are on your own and get into trouble.

Before setting off, equip yourself with strong hiking shoes, sun protection gear, and a water bottle. Gird yourself mentally and physically to endure fierce winds, blowing sand, and very little shade. It is a good idea start hiking at dawn to reach the Wave and then spend the entire day viewing it and the surrounding area. To the west of the Wave, there is a similar rock formation at the base of a steep cliff. It is called the Second Wave and, although it is not as colourful as the Wave,  it is still worth a look. It is advisable to start the hike back just after sunset.

If you would rather view the Wave from above, you can charter a helicopter or an airplane in Kanab.

The Wave provides a valuable insight into the geological processes that formed the Colorado Plateau. Apart from the fascinating science of the formation of the rocks, do visit the Wave to admire the wondrous creations of nature in a beautiful and serene environment.

Enjoyed this article? You would also love “Australia’s Wave Rock“.