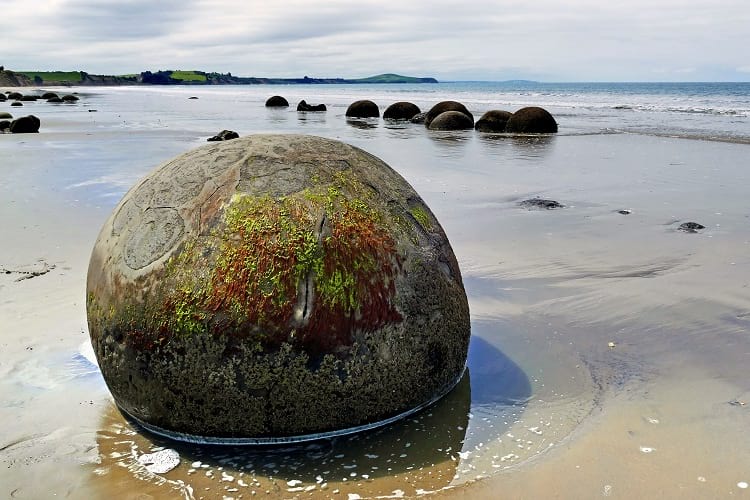 If you visit Koekohe Beach on the Otago Coast on the South Island in New Zealand, you will encounter enormous round boulders known as the Moeraki Boulders. They dot the landscape both in clusters and as single standing stones. Some of the boulders have tortoise shell type markings on them while others have split open to reveal hollow and sometimes colourful cores.

While these balls look like an alien might have spilled them across the landscape, they actually emerged from the mudstone cliffs due to erosion brought about by wind and wave action. As the cliffs continue to erode, we will find more Moeraki Boulders on Koekohe Beach. 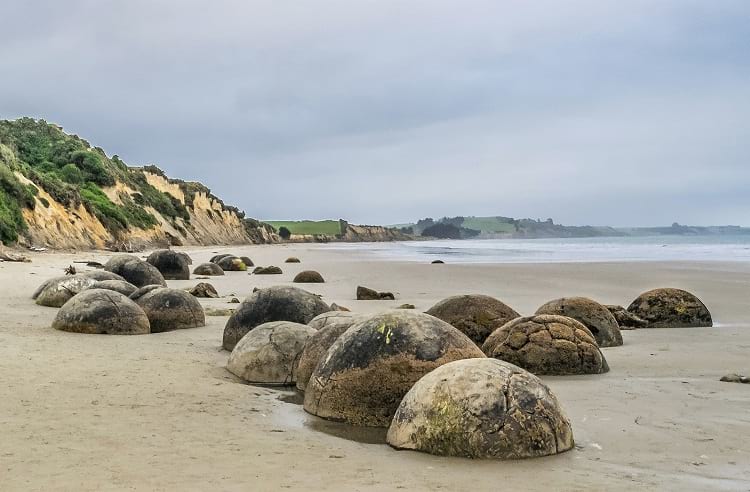 According to researchers, it is likely that the Moeraki Boulders first formed from the seafloor mud over 56 million years ago in the Paleocene era.

The grey-coloured Moeraki Boulders are concretions. That is, their formation process came about from by layers upon layers of sediments depositing over one another and then cementing together with minerals. Over time, with the continued addition of cemented layers, the boulders grew to be very large in size. It took many million years for the large boulders to take shape, and the formation of a Moeraki Boulder was not dissimilar to the formation of a pearl in an oyster shell. As in the case of a pearl, the sediment layers began to form around an organic particle.

While at first sight, all the Moeraki boulders appear spherical, they are not all perfectly round. Some of the boulders have more ovoid shapes. In their sizes, the boulders vary considerably. You will come across some boulders that range in diameter from 1.6 feet to 3.3 feet while others have diameters of 4.9 feet to 7.2 feet. 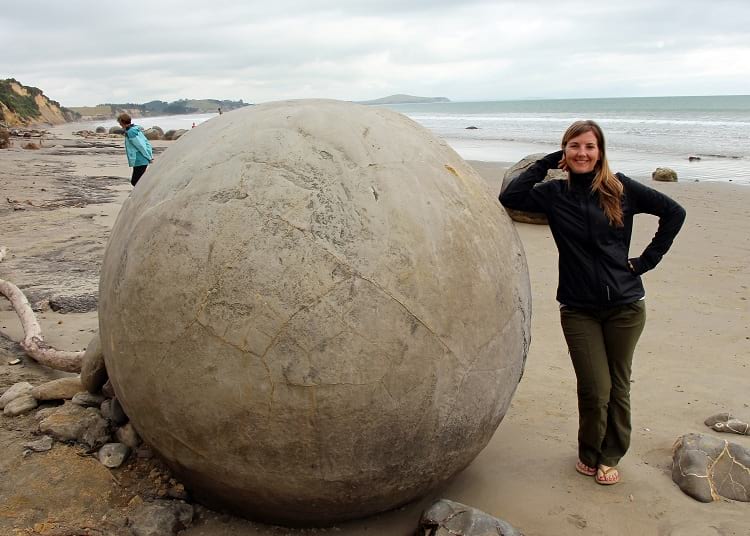 Researchers are not exactly sure how the spherical forms came about but offer different theories. According to one theory, the continuous effect of the waves against the rocks may have worn down and smoothed and rounded the rock surfaces. Another theory suggests that, during the boulder formation, the boulder received liquid mineral content in equal amounts from all directions around the core and this led to the spherical form of the boulder.

Some of the boulders have distinct cracks in them while some have broken open to reveal their hollow interiors. Researchers call the cracks in the boulders as septaria and they think that these septaria occurred shortly after the formation of the concretions. Of course, nobody knows exactly why these cracks happened, but there are different theories as to their cause. Perhaps they formed as a result of earthquakes, or because the concretion dried too fast. It may have been because the inner organic cores shrank and released gases that expanded and put pressure on the concretions, leading to the septaria.

In the boulders that have cracked open, researchers found that the inner hollow cores are weak compared to the very hard outer layers. Maori legend about the Moeraki Boulders

If the scientific theories for the formation of the Moeraki Boulders seem somewhat mundane to you, the Maoris have a more colourful explanation.

According to Maori lore, the KähuiTipuatribe once decided to set out across the ocean to find Hawaiiki, a mythical land famous for its Kumara sweet potatoes. The KähuiTipua people wanted to bring back the sweet potato plants to grow them on their own land. So, they set off in the Arai TeUru, their double-walled waka; in the Maori language, waka means canoe.

On the way back, a fearsome storm overtook them, and the Arai Te Uru ended up wrecking itself at Shag Point just off the Otago Coast. Everything in the waka fell overboard and later, as the storm abated, some of this found its way ashore to Koekohe Beach. The eel baskets, water calabashes, and sweet potato kumaras ended up on the beach and became transferred into the Moeraki Boulders. The wreck of the waka, in turn, became a reef; you can see it if you visit the mouth of the Waihemo River.

Other colourful tales about the Moeraki Boulders

You’ve probably heard this one for other strange natural occurrences – it was the Aliens. According to some tall tale tellers, the Moeraki Boulders are the unhatched eggs that the Alien parents had to leave behind after an unsuccessful attempt to colonize the Earth. Other tall tale tellers claim that the boulders are unhatched dinosaur eggs and, if not that, then dinosaur poop, both solidified with layers and layers of sediments.

The western discovery of the Moeraki Boulders

Westerners discovered the Moeraki Boulders in the 1800s. A scientist and politician named Walter Mantell made a drawing of the beach strewn with the boulders in 1848. In this drawing, which you can now see in Wellington’s Turnbull Library, the boulders appear far more numerous than there are at present. This may be on account of the cracking of some of the boulders. The boulders, otherwise, are pretty tough and have managed to weather climatic conditions very well.

Take State Highway 1 from Christchurch to Dunedin. The Koekohe Beach is in the South Island’s Otago region, about a one-hour drive from Dunedin, between the towns of Moeraki and Hampden. You can also drive over from Oamaru, which takes around 30 minutes, or from Cromwell, which takes a couple of hours. Leave your car at the car park at the Moeraki Boulders Scenic Reserve and walk to the beach.

There is no charge to visit the beach to see the Moeraki Boulders, but, note that, if you have the super strength to carry any of them away, you cannot legally do so. Previously, people often carried off the smaller boulders for garden decoration and other purposes. The area is now a protected sanctuary for boulders. You can clamber around them, but you can’t take them home.

If you are a photography enthusiast, you can have a grand time photographing the boulders. They offer some great photo opportunities, especially in the early morning hours and in the late afternoon. They also look great in stormy weather when the dark clouds are rolling overhead. It’s best to visit during low tide when you see all the boulders clearly and can walk up to them. If you go during high tide, you will see only some of their top portions. The MetService page can help you time your visit.

There are some nice accommodation options in Hamden and Moeraki if you want to stay in the area and explore the boulders and the beach some more.

Enjoyed this article? Also, check out “Penitentes – The Remarkable Ice Pillars of the Atacama Desert“.