Mammoth Camera: When George Lawrence Built an Enormous Camera for One Particular Picture 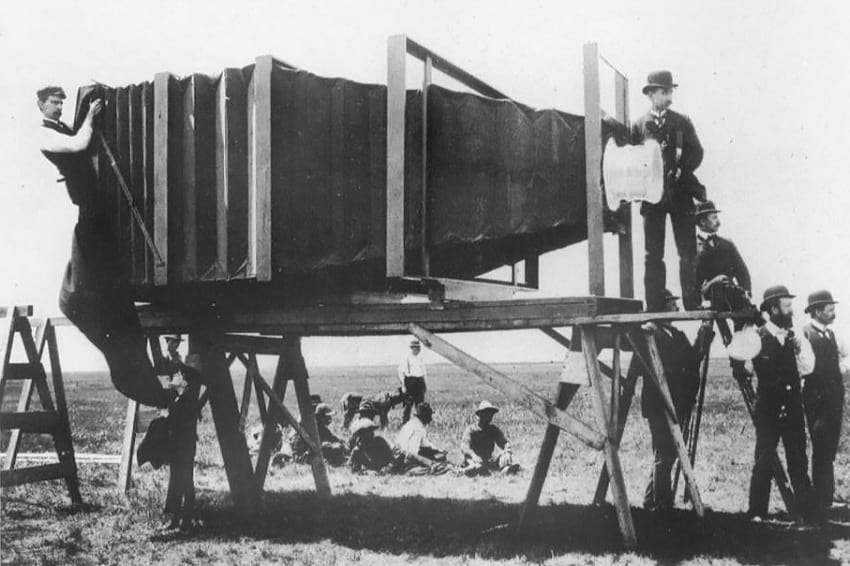 Ever wondered how photographers managed to get wide-angle shots long before modern-day mobile phones came equipped with panorama picture options? Turns out, George Raymond Lawrence had figured it out way back in the 1900s. A professional photographer and an innovator, Lawrence is credited with designing the world’s largest camera, which weighed more than 1,400 pounds. Called Mammoth Camera, he designed it at the behest of Chicago & Alton Railroad Company to shoot the world’s most beautiful train ever built.

Born in Ottawa, Illinois, in February 1868, George Lawrence was the eldest of six children. After completing his education, he moved to Chicago in 1889, where he worked for a carriage manufacturing unit called Abbott Buggy Company. At the factory, Lawrence invented a method to fix iron rims on wooden wheels of carriages, making it easier for trains to run smoothly.

After a brief innovating stint at Abbot Buggy Company, Lawrence looked for other options. He opened up a photo studio with a friend where he began working on crayon enlargements, which were quite a rage amongst the rich during the late 1800s. These photographs were usually retouched monochromatic portraits done in charcoal or pastel, which Lawrence enhanced and enlarged with the help of the new equipment he had purchased.

When in the year 1893, his partner left the studio and Chicago for good, Lawrence learnt the art of developing negatives from a local photographer. Putting this knowledge to good use, he focused his attention solely on photography and its techniques. He perfected the flash photography technique, which until the mid-1890s wasn’t even the trend, thus earning the nickname ‘Flashlight’ Lawrence.

Photography and Other Innovations in the Field

George Lawrence was quite a researcher and trendsetter when it came to photography. He worked hard to come up with newer techniques to shoot the world from a fresh perspective. Before he designed the Mammoth Camera, Lawrence worked on novel ways to click aerial pictures that gave one a surreal feeling. Aerial photography soon became his forte, and he designed large-format cameras to click aerial shots. Lawrence experimented more in this field further. He used telescoping towers to click the bird’s eye view of parks and racetracks, which unfortunately did not turn out the way he wished.

In the year 1901, he designed a customized gas-filled hot-air balloon, to which he attached a fragile cage underneath. He would climb into the cage with his camera for an aerial shot of the city’s urban scenes. Once, while ascending a little over two hundred feet, his cage detached from the balloon, hurling him and his camera towards the ground. A few telephone lines broke his fall, and he survived miraculously. This led him to improvise further. He continued using balloons for a brief period, before bringing in unmanned kites with cameras attached to them to do the job for him.

The arrival of Mammoth Camera

In 1899, the Chicago and Alton Railroad Company decided to run an express service from Chicago in Illinois to St. Louis in Missouri, for which they had built a specially-designed train. Calling it the Alton Limited, this train was considered to be the largest and the finest train in existence. With six Pullman parlour cars extraordinarily customised, the Alton Limited was a train to be looked at both from the outside and the inside, according to the Railway Magazine. Each coach of the train was identical with perfect symmetry and uniformity. All the six cars were of the same height; had the same length and even had every single window looking just the same with the same size, shape and style. Even the coal tender that followed the engine was the same height as that of the cars and the hood of the steam locomotive, too, rose perfectly to a height that matched the coaches.

The railroad company wanted a picture clicked of their prized possession in its entirety, all in one frame. That is when George Raymond Lawrence was asked to step in. The company wanted an eight-feet-long photograph of the Alton Limited, which George Lawrence thought was a mean feat to achieve. He suggested that the train be clicked in sections, which would then be joined together during the printing process. But the company directors wanted a flawless picture of their flawless train. And so Lawrence went on to build the world’s largest photographic device – the Mammoth Camera – only to click a perfect picture of the perfect train.

Specifications of the Mammoth Camera

Built in a record time of two-and-a-half months by camera manufacturer J. A. Anderson, George Lawrence oversaw the camera’s production and design. Costing 5000 USD then (approximately 154,000 USD in today’s times, adjusted for inflation), the Mammoth Camera was finished throughout in natural cherry wood. It weighed around 1400 pounds in total, with the camera weighing 900 pounds and its plate holder weighing 500 pounds. Its lenses were of the Carl Zeiss patent, with one wide-angle lens and one telescopic rectilinear lens. The former lens format gave a five and a half feet equivalent focus and the latter gave a ten-feet equivalent focus, which was also the lens used to click the Alton Limited. The Mammoth had a single 8’x 4.5’ single glass negative, which was almost three times larger than the size of an average plate ever exposed.

At the back of the Mammoth was a small track which was employed to run two focus screens. The bellows had a rubber covering and a quarter-inch thick veneered wooden piece stiffened each of its folds. Approximately forty gallons of glue was used in the construction of the large bellows, which was doubly light-proofed by a heavy, black canvas lining on the inside. The bellows were huge enough to hold six men inside it for its working, while an additional 15 men were required to operate the camera on the outside. A specially designed isochromatic plate was used to conserve the original colour of the Alton Limited in all its glory.

Since Mammoth could not afford to snap-shoot due to its sheer size, an exposure time of two-and-a-half minutes was maintained between shots. While cameras are prone to accumulate dust particles, an ingenious method was used to keep that in check too. The plate holder was put in position and an operator would enter the front board. When the door closed behind him, he would cover the lens with a ruby glass cap and draw a curtain slide to avoid dust entering inside further. He would then clean off the big plate with a camel’s hairbrush in the darkroom and later the slide would close and the operator would come out the same way he went in.

Clicking the Alton Limited with the Mammoth

On a clear morning in 1900, a padded van drove down to Chicago railroad station, from which emerged George Lawrence’s Mammoth Camera. It was then painstakingly transferred on to a flat rail coach and taken down to Brighton Park. There it was positioned in an open field at a vantage point of the Alton Limited, which was stationed further away on the tracks. Operators began assembling the giant camera and after setting the two-and-a-half minutes exposure time, a perfect negative was locked, which finally resulted in the ultimate photograph of the most stunning train to have ever been made.

Three copies of the huge photograph were later sent as an entry to the 1900 Paris Exposition. But despite George Lawrence winning the prize for World Photographic Excellence, the picture came under the microscope for its authenticity. When Lawrence and the railroad company submitted affidavits to verify the same, the exhibition officials had to believe that the large picture clicked was indeed the work of a single camera.

Built for a specific purpose, George Lawrence did not let Mammoth go so easily and used it occasionally. It was once used to click a very large group photograph, where the expressions of each individual were captured perfectly in one shot. Although towards the late 1910s, George Raymond Lawrence left photography and turned to aviation designing, his craftsmanship and masterpiece still remain legendary.

Previous Article
From Local to International Calls-Evolution of Telephone Codes
Next Article
Six Flags New Orleans: The Theme Park That Was Abandoned after Hurricane Katrina