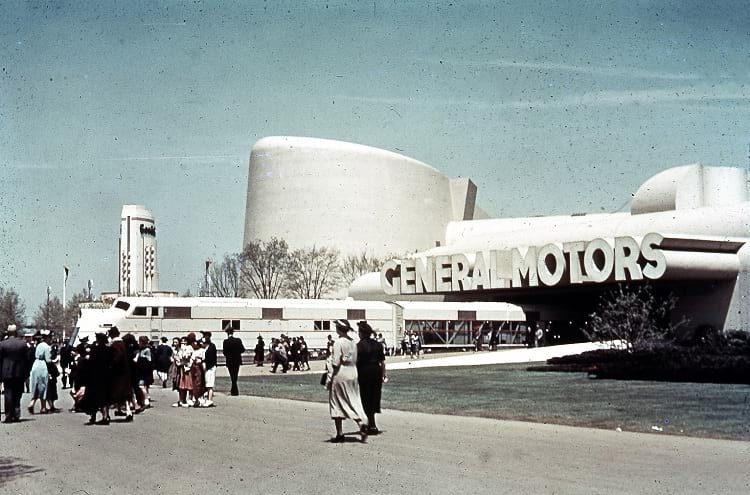 The 1939 New York World’s Fair was an event in which many countries and corporations participated to display their cultural and trade specialities. The main purpose of the Fair was to increase international trade relations between the participants and to boost US business worldwide. Amongst the Fair’s many exhibits, was General Motors’ Futurama, a diorama showing a utopian city of the future.

While most of the western world was still in the grip of the Great Depression and more troubles lay ahead, the New York World’s Fair opened to the public with exhibits on the promising theme of ‘The World of Tomorrow’. To lend the New York World’s Fair a certain gravitas, it opened on 30 April 1939, which was the 150th anniversary of George Washington’s first term inaugural as US President. Over 200,000 people attended to hear the then-current President Roosevelt’s speech at the Fair’s grand opening ceremony.

President Roosevelt’s high-minded rhetoric was in line with the World’s Fair’s mission to cast a shining light on US American economic accomplishments and to set the USA up as an example of an enlightened, democratic land that rewarded anyone willing to work hard to get ahead. He also made the usual sounds about peaceful trade and co-existence between the different nations of the world, and the public dutifully applauded. Whether they really believed him is another matter. The nations of Europe, at that point, were already on the brink of the coming conflict, and Germany, significantly, had not participated in the World’s Fair because of the volatile situation on the European continent, although they cited budget issues as the main reason.

The New York’s World Fair remained open for 19 months, and several million people attended it in this duration, including King George VI and his wife Elizabeth of the United Kingdom. The Fair that had begun with such gusto began its second year with the yet more laudatory theme of ‘For Peace and Freedom’, but, as war had already broken out in war, the public wasn’t in the mood anymore for innovative fun and redundant platitudes and the show fizzled out on 27 October 1940. 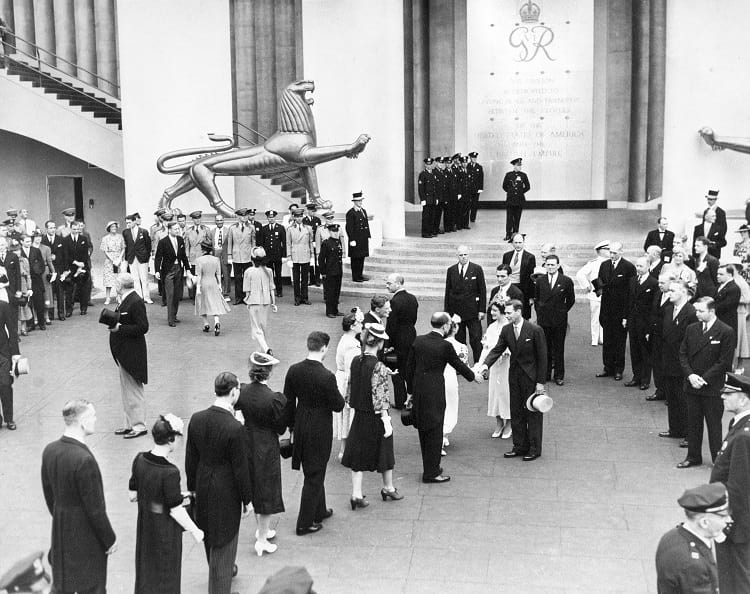 The venue of the Fair was Flushing Meadows, Corona Park, Queens. This area was formerly a large ash and garbage dump that, in the months prior to the Fair, had received a rigorous clearing and levelling to prepare the ground for the upcoming Fair exhibits. Teams of workers toiled round the clock in shifts to get the work completed on time, and their accomplishment – turning a waste dump into a beautiful 1,202 acres park – was the first, not greatly acknowledged success story for the utopian vision of the future.

Sixty countries participated in the 1939 New York World’s Fair and set up pavilions at the venue. The focus was on displaying their cultural prowess for the enlightenment of the US American public, and most of them succeeded very well in this. The displays that really stood out were by the Italians, the Japanese, the Greeks, the Poles, and the Russians.

The Italians erected a 200-foot waterfall to give the public a taste of Roman splendour, the Greeks aired their ever-popular ancient history with murals and collages, and the Poles didn’t stint in displaying a surfeit of Polish artworks, furniture, costumes, weaponry, and even King Casimir IV’s carpet. The Japanese showcased a Shinto shrine with a traditional Japanese garden and, best of all, a mural that sought ‘eternal peace and friendship’ with the USA. The USSR, on the other hand, was more intent on promoting the mighty projects that they had undertaken and achieved back home, and they were very successful in that. The Soviet designer, Alexey Dushkin, won the New York World’s Fair’s Grand Prize for his brilliant, life-sized recreation of Moscow’s Mayakovskaya metro station. 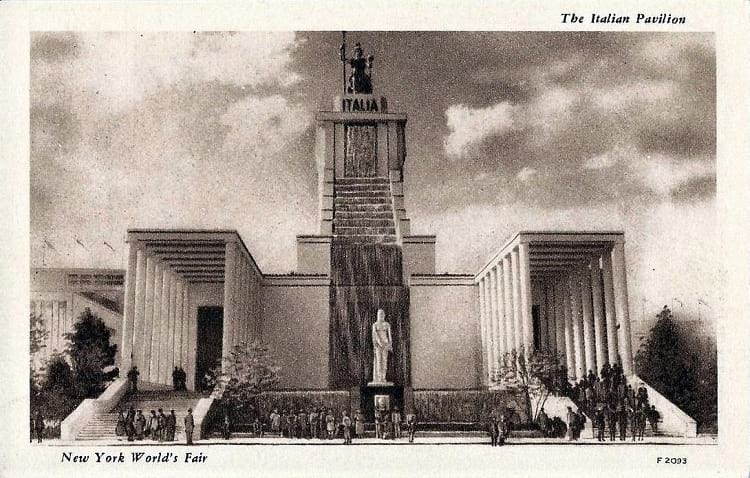 Postcard photo of the Italian Pavilion at the fair. (Joe Haupt / Flickr) Futurama, the city of the future

The most popular exhibit at the World’s Fair turned out to be General Motors’ Futurama, the model city of 1960 with skyscrapers and flyovers; it drew well over 25 million visitors. Norman Bel Geddes, who was a theatrical and industrial designer, came up with the concept, and when General Motors heard it, they ditched the plans they were formerly going with and gave him the green signal and their wholehearted support. They had a vested interest, of course, in promoting a future city in which there would be wide highways and flyovers to manage increased levels of traffic. An increase in traffic pointed to more people owning cars and, hopefully, cars that came from General Motors’ manufacturing line-up.

Geddes, on the other hand, had a hardcore utopian view of the future. He imagined that with proper city planning everything else would fall in place and public life would move along smoothly and conflicts would become a thing of the past. Idealistic planners always seem to leave the sheer unpredictability and perverseness of human nature out of their calculations. They seem to assume that if all conditions are right, human beings will behave in an expected fashion and this will lead to expected results. They fail to consider that some human beings may have an aversion towards getting herded into skyscrapers, nor may they want to be limited to driving within lanes.

Far from being utopian, such city planning has a rather authoritarian feel to it, forcing people to abide by plans in which they have had no say at all. It can only lead to festering resentment and discontent and further problems down the highway, excuse the pun.

In any case, we have skyscrapers and flyovers in the present age, and even helipads on top of buildings, so Geddes’s vision has come true to a point. The part about reducing conflict, as expected, remains unfulfilled.

Apart from being the most popular exhibit and one that left Ford, General Motor’s main rival, biting the dust, the Futurama diorama was also the largest one in the New York World’s Fair. Located in the Transportation Zone, it spread across seven acres and showed a futuristic city with skyscrapers for the city population, highways and flyovers for the overwhelming traffic, sky walkways for pedestrians to go directly from one skyscraper to another, and landing pads for the flying vehicles of the future. The highways and flyovers had multiple lanes to allow for more traffic. Geddes and his team spared no pains in designing the smallest details of the futuristic city, and their creation entranced the public. They lined up to get into moving chairs that would take them through the exhibit to give them a personal feel of what it would be like to live in such a city, and most of them gave it a high approval rating. They didn’t see it as a city that would limit their movements and keep them well-monitored, but rather as a place that was, well, utopian. Well, that is what limited knowledge and belief in government authorities and corporations do to you. In 1964, New York had the good fortune to host a second World’s Fair at the same, and General Motors attempted to reclaim their popularity with a Futurama II diorama. The fine colours of utopia had run off by now, as had subtlety and restraint. General Motors revealed their grand ambition to populate the entire planet with their cars. They meant to ‘develop’ every part of the earth for this purpose. They were not going to leave anything undeveloped, not the oceans, not the rain-forests, not the regular forests, not the deserts, not the Arctic and the Antarctic regions. And leading the development would be a machine, powered by atomic energy, that would charge through all barriers and fell trees left and right with laser beams. A factory machine would follow it and grind up all the tree remains and lay a four-lane highway in its wake. Humans, claimed General Motors, no longer needed to constrain themselves in their home choice by terrain or the terrain’s distance from major urban hubs. Even in 1964, when the public wasn’t half as environmentally aware as our current generation, this picture of the future must have rung some alarm bells. It did not quite enjoy the same popularity as the first Futurama.