The Fascinating ‘Amber Room’: The Fabled ‘Eighth Wonder’ of the World 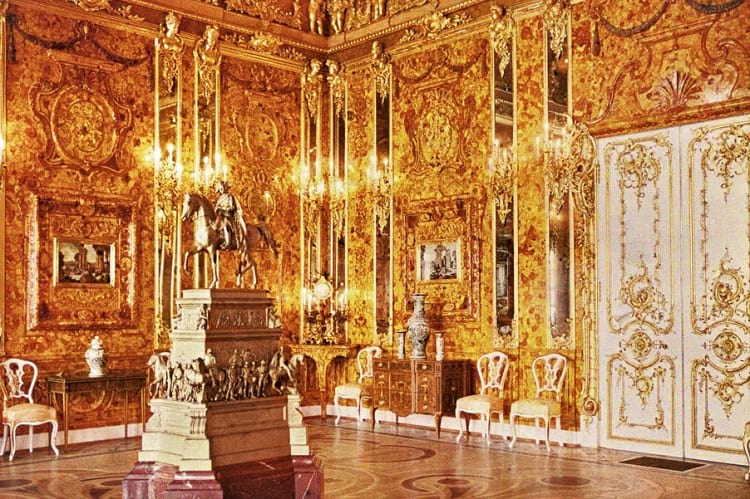 The famous Amber Room, or “Yantarnaya Komnata” as it is known in Russian, was an opulent room made of amber and gold leaf, embellished with mirror panels and semi-precious stones. Amber is a semi-transparent fossilised resin of the coniferous trees often found on the shores of the Baltic Sea. Due to its golden appearance, similar to gold, it was called the “Gold of the North” and was in high demand for making ornamental pieces. Such was the fascination for amber that the 18th century saw sculptors and craftsmen specialising in amber carvings and sculptor techniques. The original Amber Room was designed and constructed in the early 18th century for Frederick I, the first King of Prussia.

The history behind the Amber Room

The Amber Room was a tribute by Frederick I to his second wife, Sophie Charlotte, whom he adored. It is also possible that the very concept originated from Sophie Charlotte who was a connoisseur of arts or, from the chief architect of the court, German Andreas Schlüter, when he found a large collection of amber in the palace storage cellars.

Schlüter started working on the detailed design of the room in the year 1701 with another amber specialist, craftsman Gottfried Wolfram of Danish descent from Copenhagen till 1707. Together, they made floor to ceiling panels in amber with gold leaf, mirrors, mosaic and intricate inlay work. They made carvings of nymphs, cupids and angels.

Wolfram constructed 46 enormous panels of fused amber, some 12 feet high. Work continued after that by amber masters Gottfried Turau and Ernst Schacht from the Polish town of Danzig. It was planned for the summer residence of Sophie Charlotte, the Charlottenburg Palace in Berlin, but unfortunately, Sophie passed away on January 21 1705, before the Amber Room could be completed. A portion of the reconstructed Amber Room. (jeanyfan / Wikimedia Commons)

The completed panels were installed in a room in the Charlottenburg Palace which Frederick I used as his study. The room was also furnished with objects like candelabras, vases, snuff boxes etc. made of amber. It was described by those who saw it, as “standing inside an open jewel box“.

In February 1713, with work still underway on the Amber Room, King Frederick passed away. His son, Frederick William I, succeeded him and ordered for the Amber Room in its incomplete form to be stored in the arsenal in Berlin. He had no inclination of wasting any more time or resources on the humongous Amber Room project.

The amber gift to Russia

In 1716, the Russian Tsar, Peter the Great, visited Berlin and was keen to see the famous Amber Room. Seizing the opportunity to form a formidable alliance, King Frederick William I gifted the Amber Room to the Tsar. The panels were dismantled and packed in 18 large crates to be taken to the summer palace of the Tsar in St. Petersburg, Russia. Peter had planned to create an art chamber with the Amber Room. Sadly, the panels remained in storage as no artisan in Russia was able to put the pieces together to re-create the Amber Room.

After the death of Peter the Great in 1725, it took a while for his daughter Elizabeth to take over the Russian empire as the successor. Elizabeth succeeded the throne in 1741 as the Empress of Russia and in 1743 ordered for the installation of the Amber Room in her winter palace, under the guidance of the Italian court architect, Francesco Bartolomeo Rastrelli. Italian sculptor Alexander Martelli was appointed to work on restoring the amber detailing.

The room designated for the amber panels was not big enough according to the Empress, so she moved it to a hall so big that the original panels were spread out with new amber panels and mirrored pilasters in gilded frames, in between. The height of the walls in the hall was 7.5 metres whereas the amber panels were only 4.75 metres high. Rastrelli added mirrored pilasters to compensate for the height. He filled the spaces with imitation amber and decorated the upper tier with gilded woodcarving.

Maria Theresa Walburga Amalia Christina, the Holy Roman Empress, presented Empress Elizabeth with 4 panels of agate and jasper mosaic in Florentine stone by Guiseppe Dzokki, to illustrate the 5 senses of the human body.  These were placed on the 4 largest boards of the room. The new Amber Room was completed by 1745 but, Empress Elizabeth was again, not happy and had it moved 3 more times before making it to the reception hall of foreign dignitaries.

However, due to all the moving around, the amber had started falling off the panels. In 1755, Elizabeth had it moved, yet again, to her mother’s summer home, the Catherine Palace in Tsarskoye Selo near the Baltic Sea. Here, the deteriorating amber panels were replaced with gold foil covered glass due to lack of finances for resourcing amber.

The magnum opus, turning into the ‘8th Wonder of the World’

In 1778, Catherine II also known as Catherine the Great became the Empress of Russia. Having been born in Stettin near the Baltic Sea, she was an expert judge of the precious ‘Gold of the North’.  She ordered for 900 pounds of high-quality amber from East Prussia and also hired 4 Polish amber carvers from the Königsberg Guild of traders to make new panels as per the designs of the older ones.

She called upon the famous Italian craftsman, Guiseppe Dzokki to re-construct the 4 Florentine panels with amber mosaic. The panels, 1 for each wall portrayed, “Sight“, “Hearing“, “Taste“, and “Touch and Scent“. After more than 4 years of extensive restoration and change, the final Amber Room was a stunning work of art.

The room had huge floor to ceiling panels of skilfully carved amber, mirrored wall panels and the 4 amber mosaics by Giuseppe Dzokki. The final room had 1,00,000 sections of carved amber panelling arranged in 3 tiers covering a total space of 592 square feet.  Pictures made out of semi-precious stones were enclosed in 4 amber panels. A table made out of amber stood proudly in one corner of the room. 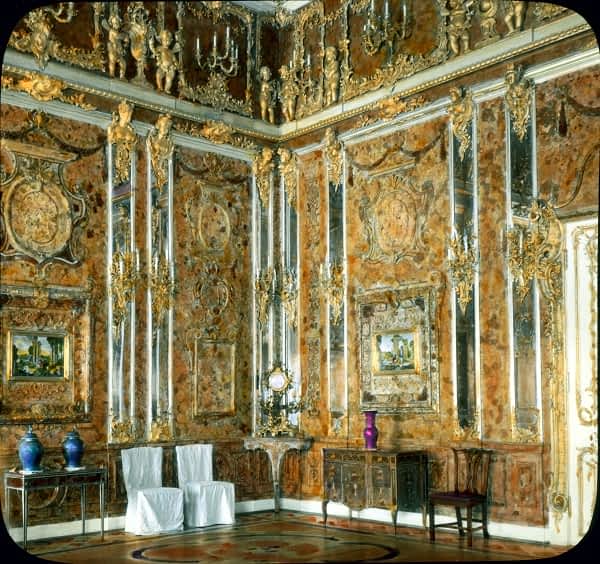 The Amber Room housed the greatest collection of art pieces in amber that could be dated back to the 17th century. The legendary room was referred to as, “The Eighth Wonder of the World“. Notable French poet and art critic, Théophile Gautier saw the room in 1886 and wrote, “Only in The Thousand and One Nights and in magic fairy tales, where the architecture of palaces is trusted to magicians, spirits and genies, one can read about rooms made of diamonds, rubies, jacinth and other jewels…“, aptly describing the magical grandeur of this mesmerizing room. The amber in the room glowed in shades ranging from a dark topaz to a light lemon yellow when seen in the light of 565 candles, reflected in 24 pilasters and 2 large wall mirrors.

The Nazi invasion and the disappearance of the Amber Room

When World War II broke out, valuable artworks and things of historic importance were being evacuated from Tsarskoye Selo to go underground, out of reach of the enemies. The Amber Room, however, was too massive and fragile to be moved. It was instead camouflaged with tapestry, to avoid drawing attention. By the time the Russians made arrangements to sneak the panels to underground storage cellars in Sverdlovsk, it was too late.

On June 22, 1941, German troops captured and cordoned off the city of St. Petersburg; and started plundering the places of importance. In Tsarskoye Selo, they were not deceived by the wallpapered Amber Room and the room was dismantled within 36 hours. Rittmeister Graf Solms-Laubach was in charge of shifting the Amber Room to Germany.

On October 14 in 1941, he sent the packed 27 crates of the Amber Room back to its home, Königsberg in Germany. The Amber Room was set up in the castle museum near the Baltic Sea and was on display there for 2 years. The daily newspaper Königsberger Allgemeine Zeitung reported the opening of an exhibition of the Amber Room on November 13, 1941.

It is alleged that towards the end of 1943, the Amber Room was again dismantled and stored in the cellars of the castle. In August 1944, Germany came under heavy aerial attack by the UK and the Königsberg castle was destroyed. The Soviets attacked Germany and occupied Königsberg on April 9, 1945. The Amber Room, however, could not be found.

Some say it was moved to Wechselburg in Saxony and buried there. Some claim to have seen it loaded onto trains to be taken to an unknown destination, whereas some believe that it was ruined in the bombing attacks of 1944. Then, there are dreamers who believe the legend that the Amber Room has been buried deep under the modern day Kaliningrad (Königsberg) Stadium in Germany. Another theory states that it could be at the bottom of the Baltic Sea where the ship carrying it perhaps sank during the attacks.

Whatever the explanation to the whereabouts of the Amber Room, it could never be found again. Though many people embarked on long journeys to search for the room and many alleged to have found proof of its storage, nothing concrete came out of it. In July 1979, the Council of Ministers of Soviet Russia came to a decision to start construction on a replica of the Amber Room.

Under the expert guidance of architect-restorer Alexander Kedrinsky, the replication plans were drawn. A special Tsarkoye Selo Amber Workshop was organised with experts who reconstructed the room from the original photographs available. Organisations that were formed to search for the original Amber Room, had found 2 original elements of the room in Germany, the “Touch and Scent” mosaic and an inlaid wooden commode. These were given to the Catherine Palace workshop in 2000. The cost of this rebuild was $11.35 million, out of which $3.5 million was provided by a German corporation as a symbol of support.

The reconstructed Amber Room was unveiled on May 31 2003, in a grand ceremony marking the 300th year celebrations of St. Petersburg. It was presided over by the Russian President, Vladimir Putin and the German Federal Chancellor, Gerhardt Schroder. The event was attended by several heads of states, including George W. Bush and Tony Blair among others.

Previous Article
The Magnificent Diwan- Life Story of the Most Powerful Indian Statesman of the 19th Century by Bakhtiyar K. Dadabhoy
Next Article
Ada Blackjack: The Woman Who Survived Against All Odds in a Freezing Arctic Island