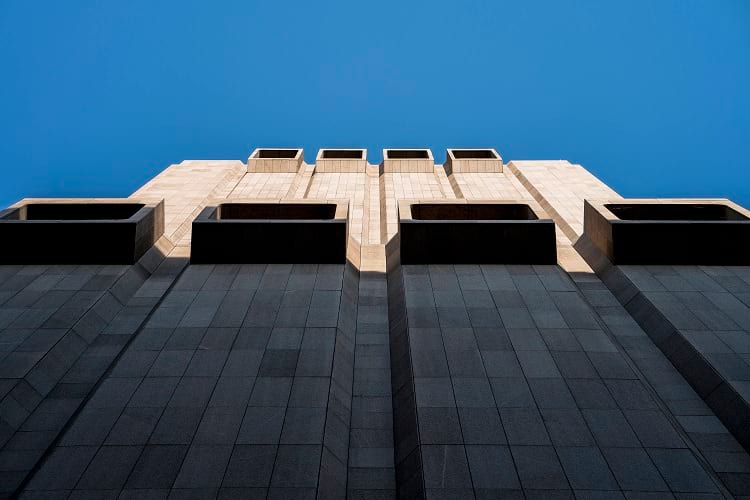 On Lower Manhattan in New York City, USA proudly stands the 170 meters tall 33 Thomas Street formerly the AT&T Long Lines Building. The building was designed by John Carl Warnecke and was completed after 5 years in 1974. The building was originally meant to be a telephone exchange & server center and was headquartered by AT&T. The Brutalist architecture style of the building does not attempt to hide the raw cement finish of the building by using decorative materials. The building was meant to hold electronic equipment and machinery. And because it was situated in a booming metropolitan city, the building could only grow vertically and not horizontally. The massive structure could have accommodated at least 60 residential floors, but since each floor is double-height at 20 feet each there are only 30 floors.

Since the sole purpose of the building was to hold machinery and not humans, the building has no windows. The windowless building helps keep a stable temperature of the room which is important while storing machinery. The machines would get wrecked as direct exposure to sunlight can affect their working. Sunlight from the windows would have further heated up the machines resulting in a short circuit or worse, caused a fire. Additionally, the windows would be useless to machines and an added advantage was that the building would be less susceptible to terrorist attacks as well as natural calamities. 33 Thomas Street: Design of the building

It is also important to note that the architect of the building, late John Warnecke, was a talented architect that the United States government had an immense amount of trust in. He has designed the US Naval Academy and the Hart Senate Office Building. He also helped in the reconstruction of a new embassy for the Soviet Union in Washington, D.C. Thanks to his father-in-law who had been a Director at an AT&T subsidiary; he was also trusted by telecommunications companies. His previous high-profile government projects and ties to the telecommunications company finally helped him get the project at 33 Thomas Street for AT&T. The building is also designed to withhold nuclear fallout. It can hold up to 1500 people inside it including an emergency supply of food and water that can help them survive for 2 weeks. It also has about 200,000 gallons of fuel that would help power generators in case of a power outage. This project was initially codenamed, Project X.

At one time, the building used to have the world’s largest long-distance phone call processing center. It used to provide approximately 170 calls in a day. The building now exists for a different purpose since AT&T shifted its headquarters a few blocks down the lane. Now it exists as a security data center and a surveillance site, codenamed TitanPointe, for the National Security Agency. 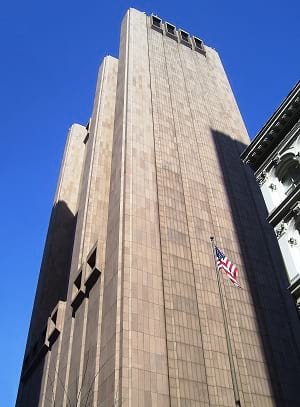 Long Lines Building up close. (Beyond My Ken /  Wikimedia Commons)

A couple of classified NSA documents sourced by The Intercept lead us to believe the relationship between Titan Pointe and 33 Thomas Street. The document mentions that Titan Pointe is located in New York City and that Lithium is the main source of contact for Titan Pointe. According to investigations carried out by The Intercept and information they received from former AT&T employees, it is clear that the codename Titan Pointe refers to the Long Lines Building and the codename Lithium refers to AT&T as a company.

It is highly likely that AT&T partners with the NSA to provide them with data only gained by tapping into phone calls between the United States and other countries. The opposite is also true in that there are documentaries that suggest that NSA equipment has been introduced within AT&T’s network to gain access to their data. Titan Pointe is also a part of another sub-project called Skidrowe that intercepts satellite signals.

It is only when investigations unearth information regarding government activity, do we begin to understand exactly how our privacy is being compromised. Until that happens, we breach the subject of confidentiality and privacy very lightly. Although government bodies may argue that violating the privacy of civilians is helpful for a bigger cause of national security. Some food for thought – where would you draw the line between privacy violation and securing the nation?

Previous Article
Futurama – Unveiling the City of the Future at the 1939 New York World’s Fair
Next Article
Cardiff Giant: The Colossus That Charmed and Mislead America