The Incredible Geoglyphs of Peru, the Nazca Lines In Peru, there is an arid stretch of a desert valley known as Pampa Colorada, in between the towns of Nazca and Palpa where a collection of geoglyphs can be found, called the Nazca lines. These lines form figures and symbols on such a large scale that they are visible from the sky, they were classified as World Heritage Site by UNESCO in 1994.

These ancient geoglyphs are said to be over 2,000 years old and have been studied by archaeologists and historians for more than 80 years. The first mention of these lines was in 1553 by a Spanish explorer Pedro Cieza de León in his book “Crónicas del Perú” describing the discovery and history of Peru. Though, Pedro mistook them to be trail markers that were used by ancient civilisations to mark the way for guidance during travels.

The origination of the geoglyphs

According to anthropologists, these geoglyphs were created by the Nazca people of South America, hence also called Nazca lines. The lines are of three kinds; straight, geometrical, and biomorphs depicting animals, birds etc. There are over 800 straight lines in the area, some that are nearly 48 km long. The biomorphs are nearly 70 pictorial representations of plants, animals and birds, nearing 1200 feet in length. The region where the lines appear is dry with hardly any wind and almost no rainfall favouring the survival of the Nazca lines over the years. 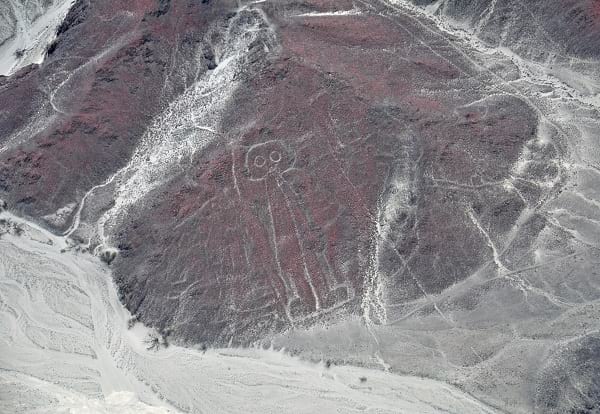 The designs have been made by removing the rust coloured gravel that covers a parched whitish cream coloured land, whereas in some cases, shallow trenches of 10-15 cm form the basis of these lines. There are several lines of varying widths and lengths created in this manner to form figures, shapes, plants, animals, birds, and even human forms. There is also a pictograph of, what seems to be, an “owlman”. The mystery surrounding the Nazca lines still remains with no explicit explanation of what they represent. The longest straight line in this region goes on for 9 miles.

The various explanations to the Nazca lines

Toribio Mejia Xesspe, a Peruvian archaeologist spotted the lines rather by chance on an adventure hike through the foothills, in 1927. He described these as ceremonial roads of religious importance at the XXVII International Congress of Americanists in Lima, in 1939. Paul Kosok, a professor at Long Island University in Brooklyn, New York was quite intrigued by the topic and decided to study the lines to understand their meaning. He was soon joined by his assistant, mathematician and archaeologist Maria Reiche.

On June 22 in 1941, Paul observed that a set of lines came together at a particular point which marked the winter solstice in the Southern Hemisphere. He also discovered the same pattern to mark the summer solstice. This clearly stated that the lines were drawn to mark the changes in the sun’s position in a year. Paul came to the conclusion that these lines might be a record of some sort of an astronomical calendar. He referred to this stretch of approximately 310 square miles as “the largest astronomy book in the world.”

After Paul’s return to the US, Maria Reiche continued the research on Nazca lines. She discovered 18 more figures, of animals and birds. She found that some of the figures were actually representations of constellations in the sky. According to her, the geoglyph of a monkey is actually the illustration of the cluster Ursa Major, while the spider represents Orion. 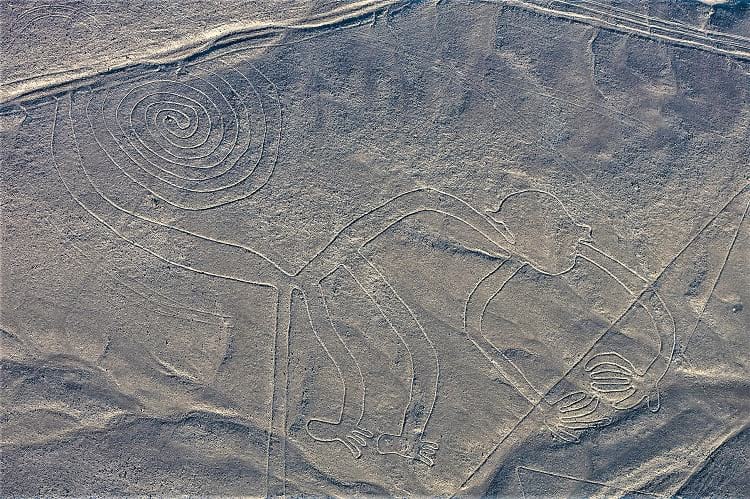 She published her theories in her book “The Mystery on the Desert” in 1949. Though her explanations were debated by many, her work along with Paul Kosok led to a growing interest in the Nazca lines. Such was Maria Reiche’s obsession with the Nazca valley that she had asked to be buried there. She passed away in 1998 at the age of 95, and now rests in peace in the same valley she had devoted her life to.

The evolving interest and theories

The most famous theory that circulated was that of aliens interacting with ancient human settlers. One of the geoglyphs resembles an airstrip which was conjectured to have been used for spaceships to land and take off. The theory was, of course, debunked as no concrete proof has ever been established of alien life.

Boston University astronomer, Professor Gerald Hawkins and his team studied the Nazca lines in 1973 to establish Maria Reiche’s theory of astronomical calendar. After studying 186 lines with a computerised programme, he came to the conclusion that there was only a 20% chance of any likeness to the orientation of stars or clusters.

German archaeologist Markus Reindel conducted a scientific study of the lines in 1997, along with Peruvian archaeologist Johny Isla. They decided to commence their study from an area which was further away from the Nazca Valley. Their observation concluded that the lines led or pointed to actual areas. They were convinced that the lines were directions to areas of settlement and sources of water. The trapezoids were drawn to show the width of water streams and their course.

As of April 2018, more than 50 new Nazca lines have been discovered in Peru between the towns of Palpa and Nazca. However, these appear to be several centuries older than the first geoglyphs discovered in the Nazca Valley. The researchers, using lightweight drones to scan the area, discovered these new lines.

These are believed to have been created by the people of the ancient Topará and Paracas settlements. Johny Isla of the Peruvian Ministry of Culture, also in charge of the restoration work and safeguarding of the lines, is of the belief that this changes the previous theories about the geoglyphs.

The Nazca lines have intrigued researchers and many archaeologists for decades now. It can only be hoped that one day we will have answers to their existence.

Enjoyed this article? Also, check out “The Classic Whodunit Mystery of the Marree Man of Outback Australia“.

Recommended Read:
Mystery on the desert: A study of the ancient figures and strange delineated surfaces seen from the air near Nazca, Peru  – 1949 | By Maria Reiche

Previous Article
The Island of the Dolls: Nothing Childlike About It
Next Article
Futurama – Unveiling the City of the Future at the 1939 New York World’s Fair