The Manhattan Project: The Making of the First Atomic Bomb 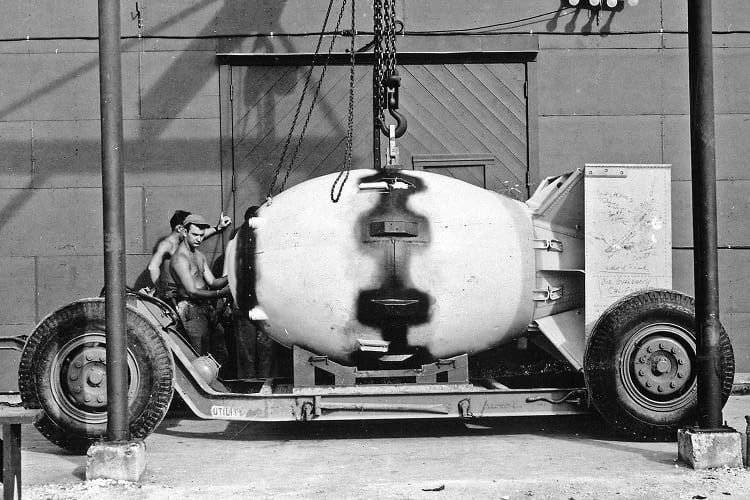 “Fat Man” atomic bomb on a trailer, produce as part of the Manhattan Project. (War Department)

The Manhattan Project was a joint effort between the U.S government and the industrial and scientific organizations during World War II  to develop a fully functional atomic weapon. Unlike the region of New York on which the project was named, this controversial creation was actually developed in Los Alamos, New Mexico.

One of the most prominent reasons for the evolution of this project was the fear that German scientists had been working on the development of nuclear technology since the 1930s and Adolf Hitler was in favour of using it.

The declaration of war 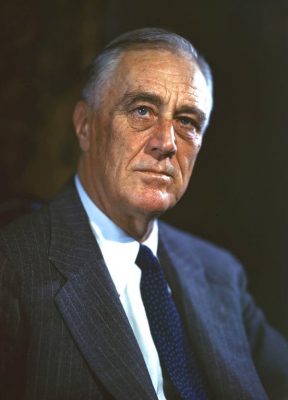 In the year 1938, the discovery of the nuclear fission by the German chemists Otto Han and Fritz Strassman made an atomic bomb a possibility, at least theoretically.

When the U.S intelligence reported that the scientists working for Hitler were on their way of developing a nuclear weapon, President Franklin. D. Roosevelt set up the agencies that led to the Manhattan Project in the year 1939.

First, Roosevelt formed an Advisory Committee on Uranium, where a highly skilled team of scientists and military officials took it upon themselves to thoroughly research the potential of Uranium as a weapon.

Once the research was concluded, the U.S Navy gave $6000 to Columbia University for research, and a substantial sum was spent by Enrico Fermi and Leo Szilard on the purchase of graphite, which is used as a neutron moderator in nuclear reactors. A team of Columbia professors, including Fermi and Szilard, then created their first nuclear fission reactions.

Later in 1940, the name of the Advisory Committee was changed to the National Defense Research Committee, which in 1941 was renamed to Office of Scientific Research and Development (OSRD), and Fermi was part of it.

The same year, the Pearl Harbour was attacked by the Japanese force, which led to U.S joining the World War II with Great Britain, France, and Russia to fight against the Germans and the Japanese troops.

The birth of the Manhattan Project

In 1942, the OSRD came up with the Manhattan Engineer District in New York City, which was led by U.S Army Colonel Leslie R. Groves. 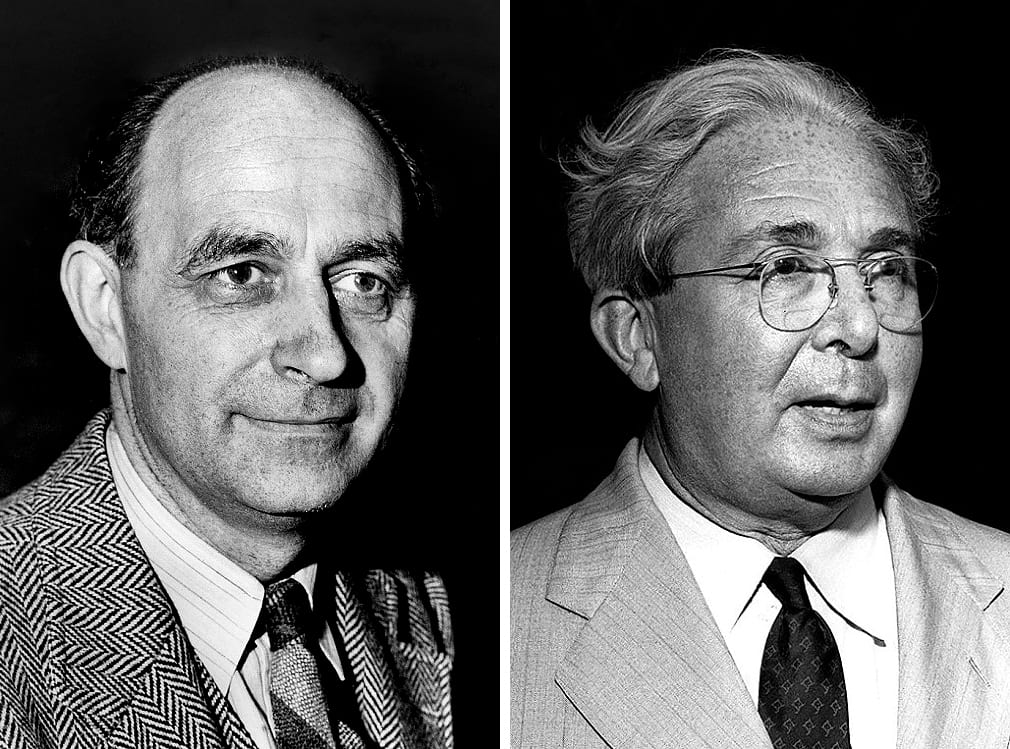 At this time, Fermi and Szilard were still very much involved in the research and were concentrating on the nuclear chain reactions. However, instead of Columbia, now the research had shifted to the University of Chicago where the were able to produce Uranium-235 successfully by enriching Uranium.

During the same time, scientists like Glenn Seaborg were able to isolate minute samples of pure plutonium. Plutonium is a radioactive chemical element, which was first produced in 1940 at the University of California, Berkeley. Meanwhile, the Canadian government and its military were conduction nuclear research at various sites in Canada.

Finally, on December 28, 1942, President Roosevelt put all the forces together, naming them the Manhattan Project and their sole purpose was to create nuclear power. Several facilities were set up in remote locations, such as New Mexico, Tennessee, Washington, and even Canada.

In 1943, theoretical physicist J. Robert Oppenheimer was named the director of the Los Alamos laboratory, which was located in New Mexico. At the time, Oppenheimer was already working on the concept of nuclear fission. The inception of the Los Alamos laboratory was called Project Y, and this is where the Manhattan Project bombs were developed and tested. 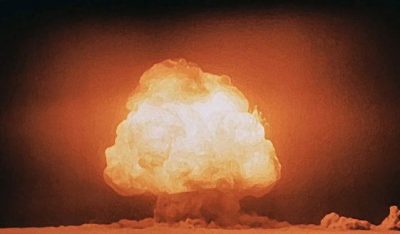 Seconds after the explosion of ‘Gadget’ over Trinity. (United States Department of Energy)

On July 16, 1945, the scientists from the Los Alamos laboratory detonated a plutonium bomb at their test site in New Mexico. The place was named Trinity by Oppenheimer, and when the bomb finally exploded, it was enveloped by a humongous mushroom cloud, which was almost 40,000 feet wide. The power was equal to 21,000 tons of TNT, and this bomb completely erased the steel tower on which it was placed. This marked the beginning of the atomic age.

The scientists developed two different versions of the bomb. One was a Uranium-based design known as “The Little Boy” and the other a plutonium-based weapon called “The Fat Man.” These bombs played a significant role in ending World War II.

In 1945, the Germans had undergone significant losses, prompting their surrender. But, the U.S Military was under the impression that the Japanese would fight a bitter fight and not give up so easily.

This called for The Potsdam Conference on July 26, 1945, in Allied-occupied city of Potsdam in Germany. This is where the U.S gave their ultimatum to Japan, asking them to surrender, agreeing to the terms of the  or face the consequences. 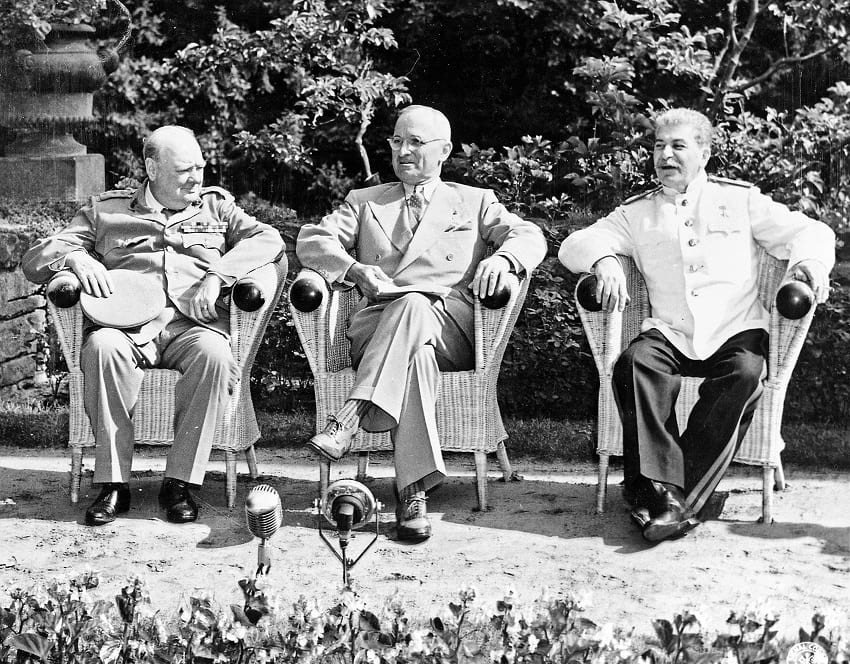 And, one of the clauses of the agreement was for the Japanese to form a new democratic and a “peace-loving government”. However, the ruler of Japan was not in favour of the agreement as there was no role for him in the future.

During the same time, the leaders of the Manhattan Project concluded that Hiroshima in Japan was an optimal target as the area was an important military base and also because of its size.

They decided that to ensure that the Japanese surrendered, the technology tested by the Los Alamos scientists in New Mexico was essential here. Although they had no surrender agreement, on August 6, 1945, the Enola Gay bomber plane dropped their untested “Little Boy” approximately 1900 feet above the city.

This led to utter destruction and death. Three days after the first bomb, with still no surrender, “Fat Man” was dropped above Nagasaki on August 9th. On August 14th, 1945, the Japanese finally surrendered. 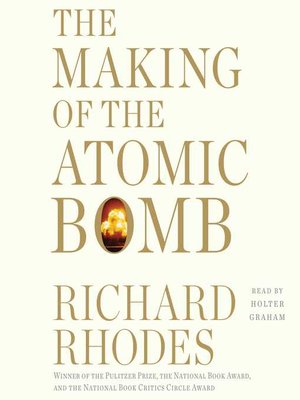 Recommended Read:
The Making of the Atomic Bomb Paperback | By Richard Rhodes

Previous Article
Hoatzin Reptile Bird: A Dinosaur-Like Bird with the Digestive System of a Cow
Next Article
The Black Death: When Tens of Millions of Europe’s Population Was Killed by the Bubonic Plague