Sailing Ships: A Brief History Into the Beginning and End of Plain Sailing of the Ancient Boats 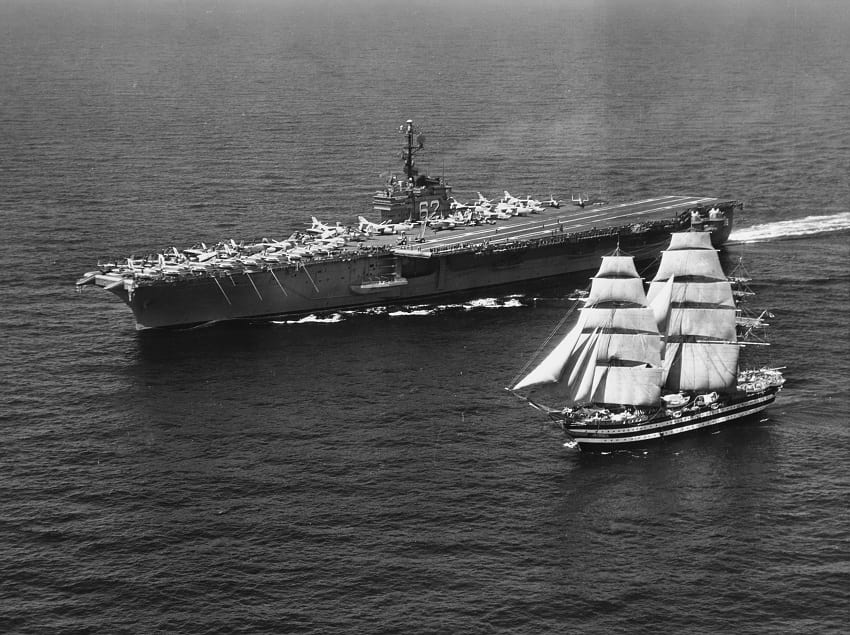 Man has used wooden rafts to cross rivers since times immemorial. In time, the rafts got upgraded to boats. Then came gigantic sea ships, powered by winds skilfully trapped in fabrics called sails, and the oars operated by human hands. Machines took over later in the 19th century. But, the sails and the oars, remain in reckoning even today. For commerce, adventure sports and the training of defence forces.

Existence of water vessels, the boats can be traced as far back in history as 4000 BCE. Herodotus (484-425 BC), the Greek historian wrote about a 2-year sea voyage undertaken by an Egyptian king in 600 BCE. Boats were designed according to their use (business, travel, or battle). Both were rowed, i.e. propelled by human hands, but differed in the way their bodies were constructed. These remained in use for long till cyclonic storms forced the man to trap and use wind power, and ‘sails’ arrived on the scene. Sail and mast were the first improvisations

The sails were pieces of cloth tied to poles in a spread out. These came in the way of winds, and the wind power was used to propel the boat. One combination of cloth and the poles hoisting it made one ‘mast’. The mast generated wind power for propulsion of the ship/boat. Some ships used both sails and oars for propulsion. Hostile winds did intercept the journey, but sails could be moved and rotated to cheat winds and remain going. Merchant ships were better off on sails alone, as space otherwise used to house the rowing crew, was made available for more payload. This ushered an era of the pure ‘sailing’ ships in a big way.

The rig was next development

In time, sails were no more plain sheets of cloth to catch the wind, but skilfully arranged traps which could be used synergistically by trained men. The sails could be manoeuvred to move the boat even against the wind currents. A change in their relative positions ensured tapping the power of flowing air as well as the fierce winds, into the desired direction. Masts attached to ropes and rotating wheels, in an ensemble called rig, made it possible.

Number of masts and shape of sail added to the efficiency

In the beginning, the principal sail was square-shaped. It had to be rotated for change in the direction of the journey. Such rotation naturally demanded some free space on the deck. It also demanded a number of men to rotate a large rig manually. So in 1200 BCE, 2 masts were put into use. The front mast was larger and triangular (lateen) and the second – smaller (generally square-shaped), behind the front mast. By 5th century AD, ships had several masts. And sails were oriented in myriad ways for desired travel. The masts were so oriented that winds could be harvested on both sides, front, as well as the backside.

Simultaneously with pure sail, oared ships were also evolving. Like, Chinese putting a watertight box long the length of the boat where men could sit comfortably and move oar with more efficiency. Oar-cum-sail models were also in vogue. In these ships, sails could be wrapped to avoid sharp frontal winds and move on pure rowing.

Carvel and clinker constructions were the earliest 2 designs

The reign of Richard I (1189-99) saw 2 kinds of ships: the fighting ship, called galley and propelled by oars. And, merchant ship – the pure sail. The Mediterranean carrack of France was one of the 2 landmark ships of 14th century. It had 3 large masts, hull (boat’s body) made in carvel construction, wooden planks butting against each other to give a smooth surface. And used both square as well as the lateen (triangular) sails. The other ship was double-ended clinker construction (hull made by overlapping wooden planks) with similar sails.

By the beginning of the 15th century, ships were using a compass for navigation. Ships, all decked up with sails (3 masts and 6 sails), became common. By the end of this century, Vasco Da Gama and Columbus made their mark in oceanic navigation, and trading became global. By 1425, the payload on a large ship had gone up from 300 tons to 1425 tons.

Ships catered to trade as well as battlefield

Merchant ships had their own armed security to face possible threats in the course of the journey. A ship used for trade during usual days could double up as fighting ship in wartime. In time, trade became a flashpoint for war. The 17th century war between Dutch and English resulted from a trade rivalry. Ship designs were spruced up to for the twin challenge of battle and business. The trading ships were escorted by the well-armed naval ships to protect them from enemies.

As the Europeans explored east, they engaged the natives of the coastal region as their business partners. Thus, in places like Calcutta (Kolkata), Madras (Chennai) and Bombay (Mumbai), European settlements were established. The arrangement paid rich dividends to Europeans, churning out profits to the tune of 100% and even more. The 17th century was Holland’s ‘golden century’ and during this very time, England superseded France as ‘Europe’s seat of industry’. As the trade of English grew by leaps and bounds, professional shipbuilders were roped in to upgrade the sea boats. By the 18th century, Britain became the topmost naval power, a status it lost to America in the middle of the 19th century.

American navy became the next superpower

When America became independent in 1783, the British colonies established in America lost business. The American traders geared up to compete with the British East India Company, and the first thing they required was strong and efficient ships. They studied the existing ship models and managed to build better ships at low cost. A number of sails were put up to increase the speed. Thus, they could ferry perishable goods well in time and beat the competition. In the year 1815, the American ships were radially improvised. By the year 1840, the total body weight of ships increased from 500 to 1,200 tons. Ship’s body (hull), earlier, used to be 4 times longer than the size of beam (width of the ship at the widest point). The ratio increased to 51/2  times. The longer ships could travel at a faster speed and returned its cost-prize to the owner in 2 to 3 years.  In 1620, the British ship ‘Mayflower’ took 66 days to travel from England to America. The American ship (from Black Ball Lines’ series), covered this distance in just 23 days in 1825. In 1845, the distance was covered in just 14 days.

The ship ‘Rainbow‘ built in 1845, a clipper ship (synonym for merchant ship), was a milestone in American shipping. It had a slim body sporting a large stretch of sails on 3 masts. Multiple arcs held sails flutter high in the air, some extending well beyond the hull. This enabled the ship to tap wind power for faster speed. More of these ships were built in the following years. Notably, the ‘Witch of Waves‘. Another, ‘Lightening’, covered 436 miles in a day at the speed of  181/2 knots.

As the era of machine propelled ships began with steamships in the early 1800s; the number of pure sails, pure rowers, and their combos, came down. But their utility has persisted, as exemplified by following two ships. Preussen: It was a fully rigged (endowed with sails, masts and related operating tool) ship having  5 masts (combo of cloth canvass and hoisting poles) on a 133 meter long steel body and. Built in 1902 by German F. Laeisz shipping company, it was incredibly elegant and smooth sailing, hence called ‘Queen of the Queens of the Seas‘. It was the largest ship of the Flying P-liners group, a genre of ships renowned for cruising speed and reliability. Being fully rigged, it required a trained crew for navigation. With a top speed of 18.5 knots, it travelled from Germany to Chile in 53 days. Unfortunately, it was hit by a British steamer in 1910, and couldn’t be salvaged. 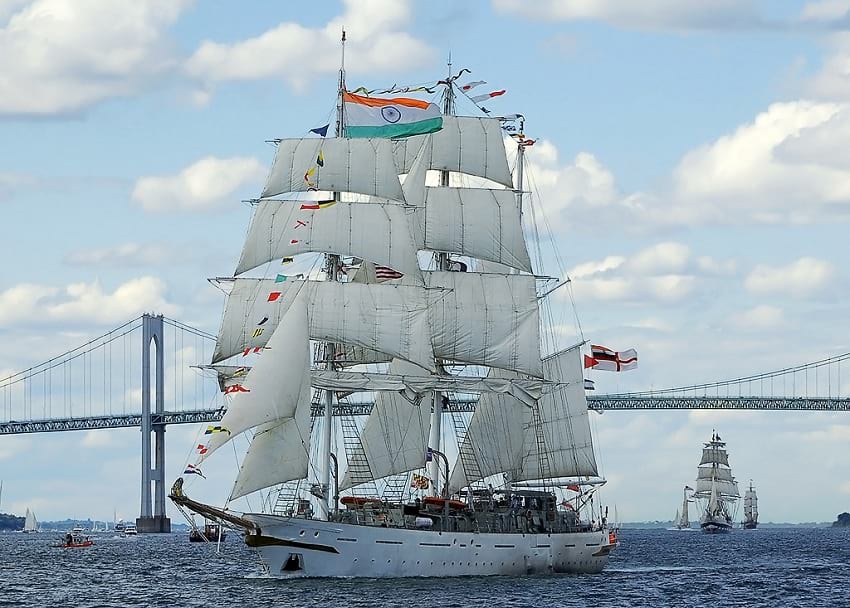 INS Tarangini (A75):  It is a 3-mast boat built by Goa Shipyard Ltd., and designed by Colin Muddie of UK.  The boat carries 20 sails. The name Tarangi is a Hindi word which means ‘wave’.  Commissioned in Indian Navy in 1997, it is used mainly for the training of cadets for Indian Navy. It is ideally suited for interface with sea environment, which is a basic drill for a career in Navy.

There are a total of 30 sail ships for naval training all over the world. Tarangini is one of them. It is a hands-on lesson in seamanship and character building for budding mariners. A floating classroom to study wind, weather and choppy sea waves. Apart from the navy, Tarangini also imparts short term courses to cadets from army and air force. From its base port at Kochi, it has sailed around the world, travelling 33,000 nautical miles in the Arabian Sea. The voyage, that touched 18 countries, was undertaken in 2003-04. Apart from that, Tarangini has successfully participated in the global competition of `Tall Ship Races’, in the year 2007, 2011, 2015 and 2018.

Acknowledging the role of Tarangini in manpower development, the Department of Posts had released a postage stamp in on it in 2004.

If old is gold, nothing says it better than sail ships.

Enjoyed this article? Also, check out “History of Lamborghini: Clash Over a 10 Lire Clutch Led to the Birth of Lamborghini Super Sports Car“.

Previous Article
Hashima Island: A Once Bustling Japanese Metropolis That Now Reminisces Its Hauntingly Tragic Past
Next Article
Newly Released In-Depth Biography of the Queen of Indian Cinema- Sridevi