Pontcysyllte Aqueduct: A High-Rise Canal-Connect Made of Cast Iron, an Engineering Marvel 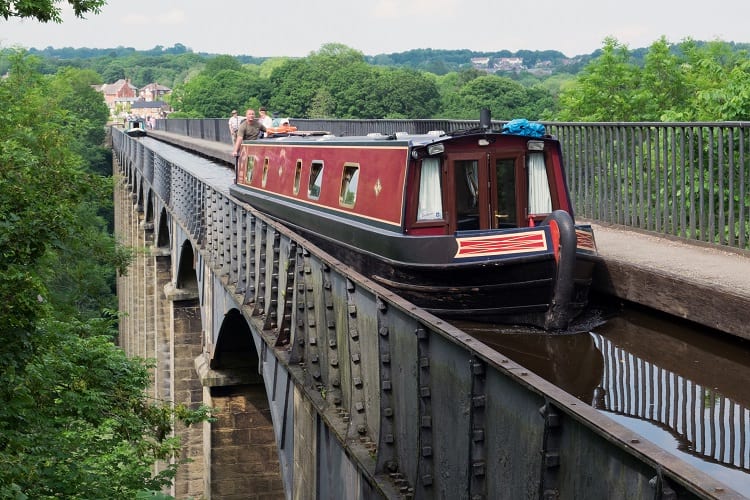 The Industrial Revolution of the 18th century was spearheaded by Great Britain, and this is best reflected in Pontcysyllte Aqueduct. Pronounced as ‘Pont-ker-suk-tay’, it is a landmark waterway, situated in North Eastern Wales. It is made of a cast-iron trough supported on 18 stone towers, 127 feet (39 meters) tall and each tower separated by a distance of 53 feet.

The trough rests on cast-iron arches which connect the towers on the top end. The brainchild of prodigal engineers Thomas Telford and William Jessop, it is tallest and the longest water channel made of iron. Also called ‘stream in the sky‘, it stands in a league with historical monuments like Taj Mahal, the Pyramids and The Great Wall of China. Literally, Pontcysyllte means the bridge that connects the river. Coupled with 11 miles of Llangollen canal, it is a designated UNESCO world heritage site, and a listed grade I building. The construction of Pontcysyllte Aqueduct

The story of this aqueduct, Pont y Cysyllte (Bridge of Cysyllte), begins in 1770 when the idea of the Ellesmere canal was conceived. This canal would link the city of Chester with the River Mersey in the north-west of England. William Jessop (1745-1814) was the technical supervisor of the project starting in 1795. The project faced a major problem. The canal must pass through river Ceiriog (in North-East Wales) and river Dee (passing through Wales and England), both having prominent valleys.

Thomas Telford (1757-1834), an engineer and architect of eminence, was roped in to meet this challenge. Telford was renowned for a string of path-breaking cast-iron bridges. Jessop -Telford duo had constructed an aqueduct over the river Ceiriog at Chirk – a small town in Wales, in 1795. This aqueduct was done in the stone structure which deemed unfit for this particular challenge. Because, the valley of River Dee was too deep and wide to permit a conservative stone- aqueduct. As the cast-iron bridges had proved their worth by this time, Telford proposed cast-iron bridge. His proposal was approved, and work began in right earnest with the approach way of canal done up by 1805. Then Pontcysyllte happened, and the rest is history.

A show of astute planning and daring technique

Officially opened for ships/boats on 25th November 1805, the aqueduct was admired worldwide for its unique design and utility. The design was unique as it forged iron into mason work. And utility was evident in ships sailing across the waterway held 126 feet above the river Dee on arched metallic ribs fused with masonry pillars. The top ends of the pillars were kept hollow to minimize load on the lower portion. A bizarre ingredient, ox blood, was mixed in a lime mortar to enhanced stickiness which would keep the stone pillars in good shape.

The approved design for aqueduct was hammered into shape by the dedicated team of professionals at Ellesmere Canal Company. Plas Kynaston Foundry was set up at close by to ensure speedy availability of cast iron parts for the construction of the aqueduct. Supporting arches and the water trough were bolted together and fixed atop the mason pillars. The trough was made airtight with Welsh flannel mixed in a blend of lead, iron, and sugar.

Only one fatality in 10 years of the construction period testifies to the astute dedication and commitment of Thomas Telford to this project. No wonder the project was a thumping success and Telford was nominated the president of the Institution of Civil Engineers in 1820. Memento marking the grand occasion had a picture of Telford in the background of Pontcysyllte Aqueduct.

The stream in the sky is as good for navigation as for a walk or cycling on towpath built aside. For the walkers, there are no railings on the side of the water body, but the outer edge of the duct has a protective railing to check accidental fall. The trough is flush cleaned every 5 years by closing the flow and draining water through an outlet. 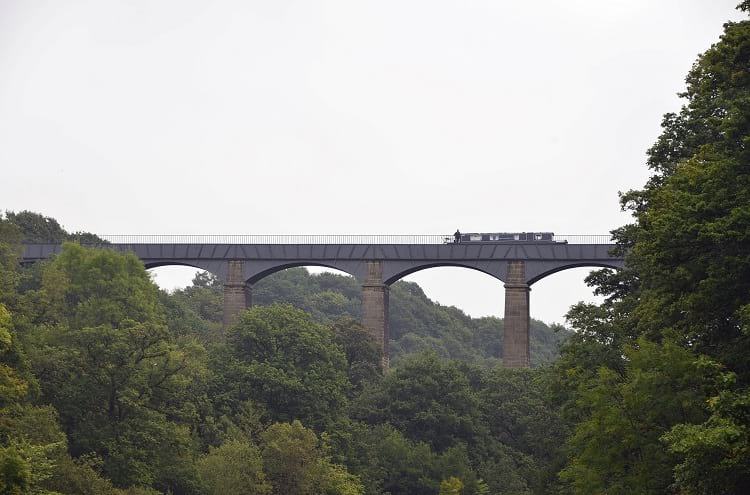 A popular tourist destination, the aqueduct provides a breath-taking view of Britain’s gorgeous countryside. On the flip side, visitors are warned of the potential dangers of reckless revelry. A ‘Ponty Safety’ drive launched by `The Canal and River Trust Charity’ in Wales forbade visitors to use floating boards in stand-up position. As channel has no railings on one side, a stand-up reveller could tip over to a fatal fall. Even the side protected by railings may not help a brazen cyclist on a narrow towpath. Such accidents may happen as the microclimate around aqueduct is unpredictable. Gust of wind can ruffle a tourist any time with disastrous consequences.

Ellesmere canal clubbed with Pontcysyllte aqueduct, had a profound impact on the economy of the region. When the local heavy industry wound up and cargo transport dwindled towards the fag end of the 19th century, the canal tourism thrived well. The economic crisis of 1930 and the World War II were a setback for the canal. An Act of Parliament in 1944 decommissioning Ellesmere canal was another blow. Nevertheless, the western branch of the canal was conserved as ‘Llangollen Canal’, for supplying water in the region. Yet, no ship sailed across the aqueduct till 1950 when a group of enthusiastic individuals rooted for tourism to preserve the industrial heritage of the canal. Tourism upped in 1960, and the canal was back in business. The British Waterways, since 1954, is serving as the navigational authority for the Ellesmere canal.

A prime relic of the Industrial Revolution

Strength and durability of the Pontcysyllte aqueduct merit description. Leaving aside re-laying of cast iron plates of the walkway in 1879, no change or repairs were made in it till the end of 19th century. Thus, it remained a prime relic of the industrial revolution. The collapse of fill embankment did happen in 1945, 1960,1982 and 1985, necessitating repairs in some areas of the duct. Further to this, the aqueduct was thoroughly repaired and renovated thoroughly in bicentenary celebrations of the year 2003-4.

A calculated risk which paid off

As a classic creation of Thomas Telford and William Jessop teamwork, a scheduled ancient monument and a world heritage site, Pontcysyllte Aqueduct stands today as majestic and functional as when launched more than 2 centuries back to ferry ‘Llangollen canal’ across the valley of river Dee. To this day, the joints of the aqueduct are sealed using the same old mixture of flannel with the iron-lead-sugar combo. Boating in the aqueduct and strolling on the towpath, one gets a feeling of being suspended in the air. What was generally viewed as a high risk off the beat idea at the time of its conception, has proved to be an earthy reality which has withstood the test of time, and will remain viable for long in the future.

Enjoyed this article? Also, check out “Golden Bridge: The Connect to the Past and the Future of Vietnam“.

Previous Article
2006 Mumbai Sweet Seawater Incident: When the Seawater had Miraculously Turned Sweet
Next Article
Phineas Gage: The Miracle Man with a Hole in his Skull who became a Major Breakthrough for Neuroscience