Golden Bridge: The Connect to the Past and the Future of Vietnam 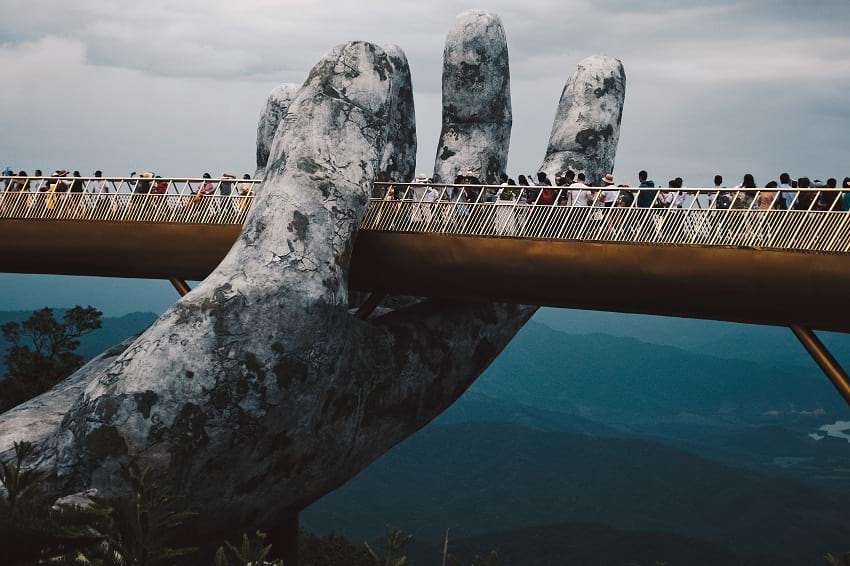 Tourism is crucial for the economy of all countries of the world. Vietnam, one of the fastest-growing economies, rides high on tourism which contributes 7.5 percent to its GDP. Golden Bridge in Da Nang city of Central Vietnam is a popular tourist attraction. The bridge got constructed in a record time of one year, and became an instant hit. Opened to the public on June 2018, it’s an architectural marvel, a slice on nature, an emerging national symbol, and a spiritual jaunt rolled into one.

A yellow fabric spread in the hands of God

The golden bridge is a 150 meters long overpass and derives its name from its golden-coloured silhouette. Grossly it looks like 2 hands of a damsel are holding yellow silk between them. The gigantic hand, representing mountain god, hold the bridge up in forested hills of Son village in Hoa Vang district of Da Nang. The bridge offers a fascinating view of mountains and greenery in the distance. Located 1414 meters above the sea level, it provides a breathtaking view of the mountain tops in British Columbia, Canada. Flush with Lobelia Chrysanthemum flowers along the way, the curved bridge is sheer magic to walk on. The two hands of the golden bridge. (Xiquinho Silva / Flickr)

A favourite of writers, photographers and filmmakers

The golden bridge has received rave reviews from scribes and the travel bloggers. Media generally holds that the bridge may become a new symbol of Vietnam. The experience of crossing the bridge is described by many as crossing the paradise. A popular venue for excursions and events, a fashion shoot was also held on the bridge. The shoot was attended by the leading Vietnamese models. The versatile make and placement of the bridge make it a photographer’s dream place for an intensive and extensive photoshoot from myriad angles.

The golden bridge is part of Ba Na Hill resorts. The Ba Na Hills used to be the holiday resort of the French rulers in the 20th century. The colonial rule was usurped in 1945, and thereafter, the resort, called French village, turned into ruins. As of now, a replica of the village is constructed in the area for tourist. The visitors can see the area in a cable car. Remnants of colonial time buildings/settlement can also be seen in Hill resort area.

The Ba Na Hills in Da Nang was already a tourism hub even before the construction of the golden bridge. The bridge added to the popularity of this place. In the present day global trend of erecting uncanny bridges for tourism, the golden bridge has a pride of place. It ranks among the top 100 tourist destinations of the world. Designed by TA Landscape Architecture in Ho Chi Minh city, the bridge is a masterpiece of the genre. The principal architect, Vu Viet Anh, said the bridge was designed to give walkers a feel of ‘moving in the hands of god’.

Close to nature in make

Doubtless, blending with the environment without compromising with tensile strength, is the key feature of the golden bridge. The concrete ‘God Hands’ is built on an iron frame imitating skeleton the human hand. Fibreglass fills up for muscles and skin, and fingers are crafted to look natural fingers of a living human.

A way to sightseeing and excursions

The bridge, a $2 billion architectural marvel, is connecting a link to several seeable destinations. Like, Debay Wine Cellar, the wine store built by the French in 1923. Le Jardin D’Amour Flower Garden, a conglomerate of 9 gardens with exquisite flower varieties. French village, with a vintage of the colonial past. Fantasy Park, the amazing playground for multiple games. And much more.

Previous Article
Frederick Law Olmsted – Father of American Landscape Architecture
Next Article
Why Were the Apollo 11 Astronauts Quarantined after Returning from the Moon?