Penitentes – The Remarkable Ice Pillars of the Atacama Desert High in the Andes, in the Atacama Desert, an astonishing sight greets visitors. In certain areas, entire fields of ice and snow pillars stretch up towards the sun. Some of the pillars are small, measuring only about a few centimetres, but others can tower up to 20 or 30 feet. The pillars occur in a very close together spaced formations, making it difficult and sometimes even impossible to pass through their midst, and they are broad at the base and narrow progressively to form elongated, conical points at the top. Seen together, they look remarkably like a crowd of white-garbed, hooded priests bent in prayers, and it is this resemblance that gave them their name. 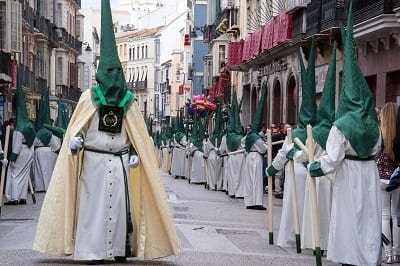 Penitente is the Spanish word for a remorseful person, and during the Holy Week in Spain, there is a Procession of Penance in which priests with pointed white hoods participate to perform religious penances.

Penitentes of the Atacama Desert

A cold, dry wind blows through the arid Atacama Desert that stretches across part of Chile’s northern region and Peru’s southern region. According to local belief, it is this wind that gives rise to the ice and snow pillars that we know as penitentes.

In the Chajnantor plain in the Atacama, which is 4000 feet above sea-level, the penitentes occur year-round in open areas that get plenty of sustained sunlight. You would think that the ice and snow would melt into puddles under the hot sun, but instead of melting, the snow transforms into vapour. This process of ice and snow turning directly into water vapour is known as sublimation. As the water-vapour moves in the upward direction towards the sun, it causes shifts and changes in the ice and snow and that leads to the formation of the pointy penitents. Charles Darwin and the Penitentes

On 22 March 1835, Charles Darwin, the famous British biologist, was on his way to Mendoza city in Argentina from Santiago de Chile, and he happened to make his way through the Piuquenes Pass in the Andes mountains. He described the region as having “bold conical hills of red granite” and “several broad fields of perpetual snow”. It was here that he first encountered an entire field of tall penitentes and while he marvelled at this fascinating phenomenon, they turned out to be quite a nuisance nevertheless. Close-set as they were, they formed a formidable barricade and his cargo mules, he wrote, had a difficult time picking their way through them. Darwin also noticed a dead, frozen horse sticking up high in the air, impaled on the penitentes, with its hind legs pointed to the sky. In his notes, Darwin surmised that the horse had probably fallen head first into a hole and, later, as the penitentes formed and grew taller and ever taller, the dead animal was pushed out to the surface and thence skyward.

Darwin was the first Western scientist to write about the penitentes, and his observations sparked a great deal of interest in these natural ice sculptures and led other researchers to try and discover how they were formed. Penitentes can be ranging from a few centimetres tall up to 10 meters. (Daniel P. Gauer / Flickr)

Theories about the formation of Penitentes

For quite a while, researchers subscribed to the view shared by Darwin and the local people that it was the Andean wind that caused the penitentes to take shape. Many researchers have since challenged this view and have attempted to find other explanations, backed by experimental recreations of penitentes in the laboratory.

A biophysicist at the University of Colorado, Meredith Betterton was sufficiently intrigued with penitents to recreate them in the laboratory and formulate a predictive mathematical model to explain their formation process.

According to Betterton, sublimation was the main cause of penitente formation. Sublimation, as mentioned before, is the process of ice or snow turning directly into water vapour without melting into water first. When the sun shines down on the ice or snow, its heat causes some areas to turn into vapour faster than the others and this creates shallow troughs or depressions in the formerly smooth surface. Under sustained sunlight, the heat and any melted water cut more into the troughs and deepen them further, while the walls remain relatively unaffected. What you get as a result are tall spikes of ice or snow, and as the process keeps repeating, an entire icy forest of penitents can spring up. The scientific community accepted Betterton’s explanation for the formation of penitentes, but a group of French researchers from the Institute of Industrial Physics and Chemistry in Paris wasn’t entirely satisfied with it. This group, which included researcher Philippe Claudin, pointed out that Betterton’s model was incomplete since it failed to explain why there was the fixed spacing between the penitentes. If the penitentes were indeed formed by ice vaporizing at different speeds, there shouldn’t have been such equal spacing. There ought to have been more diversity in the spacing values.

Vance Bergson and Penitentes in the lab

French researcher Vance Bergson and his colleagues at Paris’s Ecole Normale Supérieure recreated penitentes in their laboratory with a block of ice in a freezer. Along with controlling the temperature and humidity in the freezer, they kept a light shining continuously on the ice block. Within a few hours, they observed formations of small penitentes on the ice block. In this experiment, their findings turned out to be different from those of Claudin and his group of researchers. According to Bergson and his team, the humidity in the freezer did not appear to affect the growth outcome of the penitentes very much, at least not until the humidity level in the freezer reached 70%. The penitente growth, however, did slow down when the researchers increased the freezer temperature to above -4 degrees Celsius. This indicates that a rise in overall global temperatures is not likely to be good news for the continued existence of penitentes.

If permanent penitente formations disappear, it is likely that glaciers are going to experience an adverse effect of their absence. Tall penitente icy forests cast shadows on the plain surfaces of glaziers and slow down the natural sublimation processes and keep the glaciers from melting away. Bergson and his team discovered that adding a layer of black carbon powder over snow or ice can help shade the surface from light and inhibits sublimation and speeds up the growth of penitentes. Guilleminot and Olea and the dew point theory

According to Pablo Guilleminot and Rodrigo Olea of the Universidad Andrés Bello, the formation of penitentes is a “purely radiation-driven phenomenon”. The sunlight enters the ice or snow surface at a certain angle and this influences the growth of the penitentes and causes the distinctive tilt towards the sun. For penitentes to form, the ice or snow must have a below freezing point dew point. Which means the surface ice loss rate by the sublimation process must be greater than the rate at which the surface absorbs vapour from the surroundings. If instead of undergoing sublimation, the ice melted into water, the water would smooth away irregularities and prevent the formation of penitentes.

What all the researchers appear to agree on is that more research is necessary to get a better understanding of penitentes and glaciers.

Penitentes on Europa and Pluto

Penitentes occur mainly in the Andes and in the Himalayas on earth, but they may also occur on other planets and planetary moons. Recent NASA findings point to their occurrence on Pluto and on Europa.

The science-fiction writer, Arthur J. Clarke, was way ahead of NASA when he wrote in his 1982 novel “2010: Odyssey Two” – “All these worlds are yours – except Europa. Attempt no landings there.”

Because landing on Europa would be a dangerous enterprise, and, apparently, this is indeed the case.

Europa is one of planet Jupiter’s four moons and is apparently an ice-covered world with an extensive salt-water sea underneath the ice. The Arecibo Observatory in Puerto Rico sent radar signals to map Europa and the data they collected pointed towards an uneven landscape of deep ridges and crevices. When NASA sent their New Horizons spacecraft to Europa in 2015, they discovered what they call a ‘bladed terrain’. According to computer simulations created by NASA scientists, the icy equator, which receives the strongest sunlight on Europa and has temperatures as low as -200 degrees Celsius, is studded with jagged spires of penitentes that occur at intervals of 7.5 metres and are much bigger and taller than the penitentes on earth. Europa’s penitentes may very well scale heights of 50 feet. That is almost as tall as some five storey buildings. Imagine an entire icy forest of such tall penitentes.

Not at all the sort of surface that anyone with a sound mind will want to attempt a landing on, given the impossibility of finding space for setting down a spacecraft. NASA is sending a Europa Clipper mission to Europa in 2022-2025 and that will likely provide more details of the moon and its penitentes.