Socotra Island of Yemen: The Most Alien-Looking Place on Earth 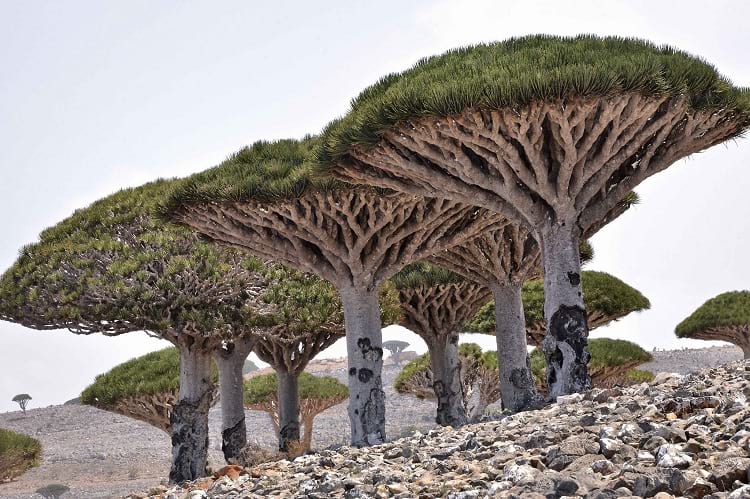 Socotra is a small and compact archipelago in Yemen with an area of approximately 1,400 square miles. It is comprised of four islands and islets, off the coastal Horn of Africa in the Indian Ocean. It is situated around 350 km on the southern part of the Arabian Peninsula.

The island is replete with more than 800 unique species of flora and fauna of which almost one-third are believed to be endemic. There are unquestionably numerous plant species that still need to be discovered. The most prominent of them are the mythical dragon’s blood trees that resemble flying saucers roosted on the tree trunks.

The archipelago is characterised by narrow and confined coastal plans, pristine wide beaches, limestone plateaus and caves and the towering Hajhir mountain range that rises as high as 1,500 meters above the sea level. 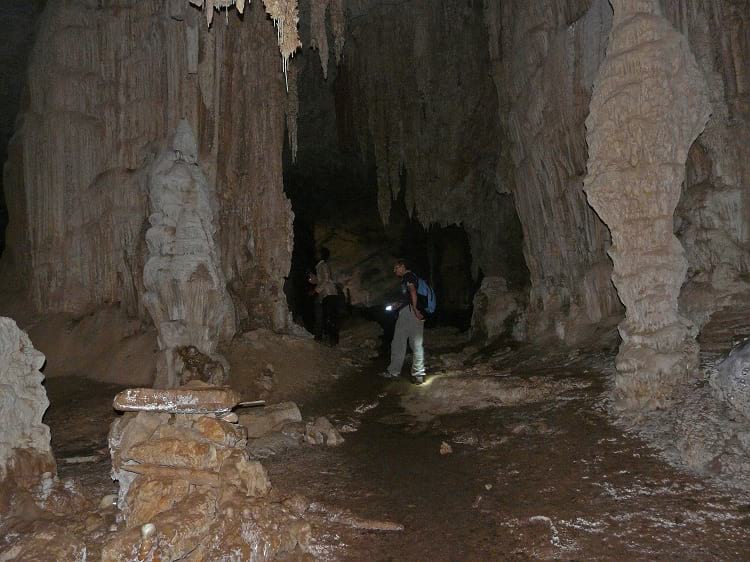 Socotra is flanked by its three siblings and relatively smaller islands of Samḥah, Darzah Al-Ikhwān, and Abd Al-Kūrī. Much akin to the Galapagos Islands, Socotra is famous for its boundless natural fortunes and endowments. 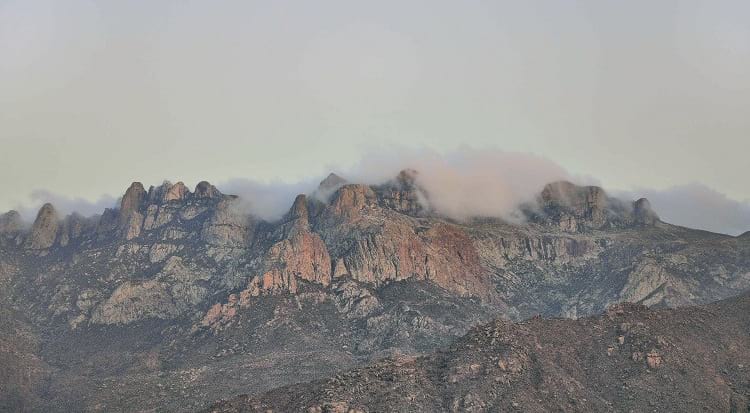 The climate here is harsh and temperate with average temperature reaching 25°C with hardly any rainfall. Despite the hostile climate, the island is home to some of the most stunning and marvellous forms of vegetation and untamed life.

The name Socotra has a correlation with the Sanskrit term “dvipa-sakhadara” which means paradise or the abode of bliss. The island finds note-worthy mentions in different legends. The indigenous population were originally Christians. However, the 17th century was a marked spectator to the disappearance of the religion.

For several years, the Mahra sultans of Yemen reigned over the island. Their rule was disrupted after the Portuguese invasion and occupation of the island from 1507 to 1511.

In 1834, the British tried to buy the island but failed in their pursuit. However, sometime around the 1880s, the sultan took refuge under the British defence and dominance. The sultanate culminated in 1967 with Socotra becoming a part of the sovereign and unified Yemen. The island had also enchanted the likes of the swashbuckling Alexander the Great, Marco Polo, and the legendary Sinbad.

The foliage of the island

A standout amongst the island’s most astonishing plants is the “Dragon’s Blood Tree” (genetic name Dracaena Cinnabar). It is an unusual looking tree having the shape of umbrellas. As the legend goes, the purple-hued resins of the tree are nothing but the dragon’s blood. They are trusted to have therapeutic properties. In the medieval times, these resins found use in making violins. Nowadays, the locals use the resin to manufacture paints and varnishes. Another remarkable plant is the purported “Desert Rose Tree” (genetic name Adenium Obesium). The tree has a captivating shape like elephants’ legs that are trying to make inroads into the rocky soil. 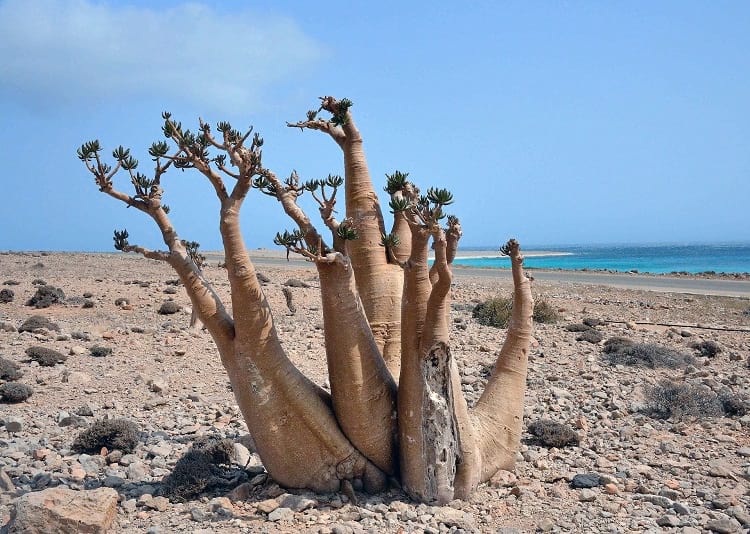 The tree also delivers wonderful and colossal pink blooms in April. The succulent trunks of the trees are precious water reservoirs in the arid desert climate. The tree grows up to a height of five meters and a diameter of three meters. 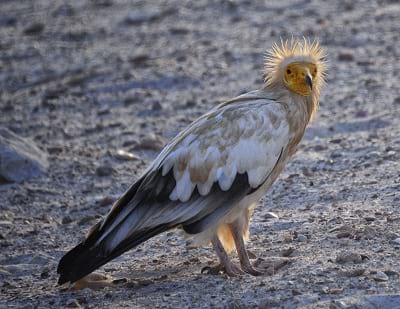 The reptiles include strange species of legless lizards, skinks and a unique chameleon, Chamaeleo Monachus. The island is home to the tarantula spider, Monocentropus Balfouri. It also enjoys the presence of the unique butterfly variety Bicyclus Anynana.

Socotra also enjoys a divergent marine life with over 250 species of reef-creating corals, more than 700 species of coastal fishes and around 300 species of crabs, lobsters, and shrimps. Like other isolated islands, the only native mammals of Socotra are bats.

In contrast to the Galapagos Islands, Socotra is largely inhabited and currently boasts of a populace of over 50,000 people. The sedentary natives of Socotra are engaged in small-scale agriculture, fishing, animal husbandry, and pearl diving as their main sources of income.

Much interior, nomads occupy themselves in keeping cattle and growing a few crops. The island’s principal exports are fish, ghee or clarified butter and frankincense.

Hadīboh is the capital and largest town situated on the northern drift. In acknowledgement of its unmistakable plant and wildlife, the archipelago was designated as a UNESCO World Heritage site in 2008.

The United Arab Emirates has positioned vast military troops in Socotra and captured its key location areas. The UAE has sought to transform the bizarre island into a holiday resort and a permanent military outpost.

This has engendered in widespread public outrage. Socotra, being a UNESCO world heritage site, is recognized as a Yemeni territory. The inhabitants are opposed to the idea of the island becoming an object of conflict.

Abd-Rabbu Mansour Hadi, who is the President of the current Yemeni government, is vexed at the recent developments. He is reported to have informed sources about his initial unawareness of the UAE’s action of military deployment and plans of plausible annexation.

A ferocious cyclonic storm Mekunu hit the Arabian Peninsula during the last week of May 2018 that affected several parts of Saudi Arabia, Yemen, and Oman.

It ravaged the Socotra Island extensively, sinking ships and watercraft which they usually used to carry food and essential supplies that the island primarily relies on.

The island stricken by the savage tempest is coming up against a huge shortage of food and basic necessities. This is also attributed to the major military deadlock between the local Yemen government and the UAE.

The impasse has delayed the reconstruction of the island because of the presence of the Emirati army. The UAE claims this endeavour to be humanitarian. On the contrary, the natives believe it to be part of the UAE’s strategy to overpower the country’s existing government and usurp the island.

Russian discovery of the supposed Garden of Eden

A Russian archaeological team, in the year 2010, discovered the relics of an archaic city in the island. It is expected to date back to the 2nd century. Socotra is also surmised to be the original location of the Garden of Eden.

Because of its isolated placement, large-scale biological diversity, and the way that it is situated on the ridge of Yemen’s Gulf of Aden, many associate Socotra with the ancient Sumerian stories of the kingdom of heaven called Dilmun.

Previous Article
Resolute Desk: The US Presidential Office Desk Was Made From an Abandoned Ship
Next Article
Battle of Los Angeles: When the City Fought a Bizarre Battle with Nobody