AMARG: The US Plane Graveyard Where Aircraft are Stored, Stripped, Repaired, and Restored 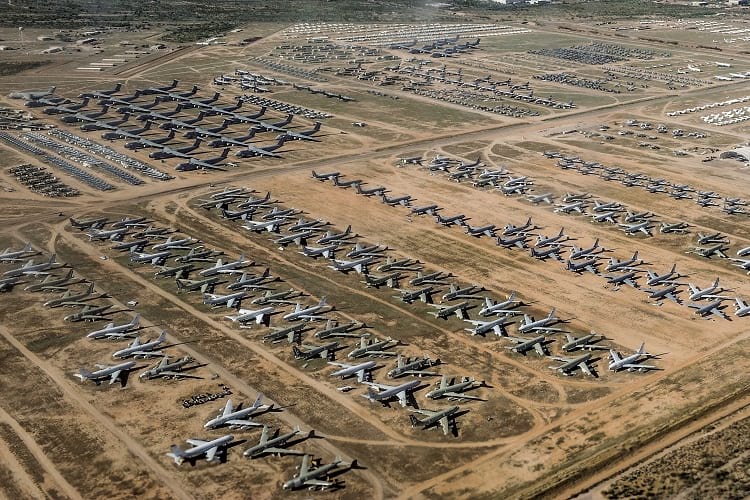 The 309th Aerospace Maintenance and Regeneration Group (AMARG) holds a special fascination for aviation enthusiasts. Located at the Davis-Monthan Air Force Base in Tucson, Arizona, AMARG stores and maintains various types of aircraft and missiles on its 2,600-acre facility. Since quite a few of these aircraft fall in the vintage or out-of-service category, a popular nickname for AMARG is The Boneyard. It is certainly a veritable graveyard for planes.

After the wholesale destruction and senseless mayhem of the Second World War ended, the United States emerged as a mostly unscathed, powerful nation with a surplus of aircraft. It was necessary to store these aircraft somewhere for later use or to strip them for spare parts. In 1946, the US government established a new base for the 4105th Army Air Force Unit in Tucson in Arizona for this purpose.

Satellite photo of The Boneyard. (USGS)

While the purpose of the facility remains the same to the present day, the name of the facility has undergone several changes over the years. It became the newly independent United States Air Force’s 3040th Aircraft Storage Depot in 1946. The government dubbed it the Military Aircraft Storage and Disposition Centre (MASDC) in 1965. Later, in the 1980s, it became the Aerospace Maintenance and Regeneration Centre (AMARC). The 309th Maintenance Wing took over command of AMARC in May 2007, and the centre now became the 309th Aerospace Maintenance and Regeneration Group (AMARG).

The dry climate of the area is conducive for storing aircraft since low humidity means less rust and corrosion. It also helps that the hard soil makes moving the planes around easier.

Planes and missiles at the facility

The US government stored the bomber aircraft, Boeing B-29 Superfortress and the military transport aircraft, Douglas C-47 Skytrain, at the base after the Second World War.

In the 1960s, the US armed forces sent their out-of-service aircraft to this base. The Navy initially had their own plane graveyard at Naval Air Station Litchfield Park in Goodyear in Arizona, where they sent all the coast guard, navy, and marine planes. But, in 1965, they moved 500 of these to the Davis-Monthan Air Force Base. Three years later, in 1968, they closed Litchfield Park.

In addition to processing aircraft, the facility at the Davis-Monthan Air Force Base began dismantling intercontinental ballistic missiles in the 1980s. These missiles are also reused for launching satellites.

On 31 July 1991, the United States and the Soviet Union signed a bilateral treaty to reduce and limit strategic offensive arms, and this treaty came into force on 5 December 1994. To comply with this treaty, AMARC began dismantling 365 B-52 bombers. The Soviets could view this dismantling via satellite and by on-site inspection at the facility. AMARC initially used a 13,000-pound, crane-supported, steel-cable guillotine to chop the B-52s to pieces. Later they used K-12 rescue saws. The latter made it possible for AMARC to gather more salvageable spare parts. 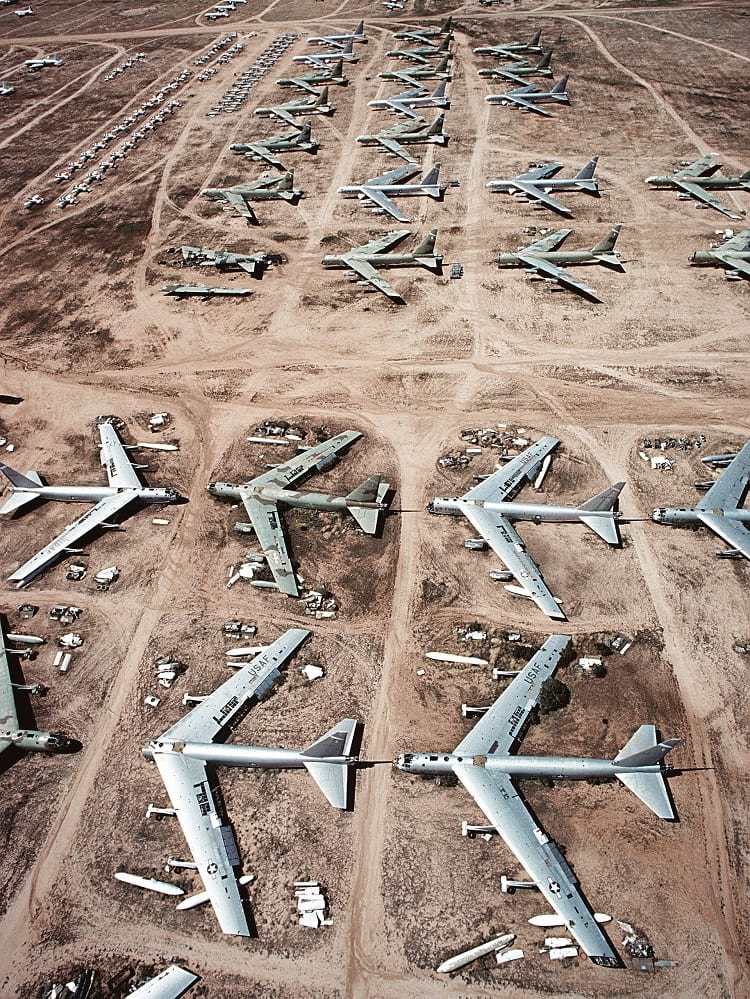 Storage and processing at AMARG

AMARG stores aircraft in an intact state for long-term use and for shorter stays. The aircraft technicians repair some aircraft for the Department of Defence’s reuse. In the case of aircraft that they cannot repair for reuse, they take them apart completely and salvage spare parts from them.

Before putting any aircraft into storage, AMARG processes it carefully. The technicians remove the plane’s classified hardware and the charges under the ejection seat. They wash the plane thoroughly with clean water to remove dust and residue. They drain the fuel system, refill it with lightweight oil, run the engines, and then drain the oil. Doing so coats the fuel system plumbing and engines with a protective oil layer.

To protect the aircraft from dust, heat and light exposure, the technicians spray the aircraft with two coats of protective plastic compounds. Spraylat is one such vinyl plastic compound and its application includes a black coat to seal the aircraft and a white coat to keep the temperature down. The sprayed aircraft can then safely remain in its designated spot for a good while without incurring any long-term damage.

Every year, AMARG receives several hundred aircraft for storing and several hundred aircraft for reprocessing. Out of 300 aircraft, they may repair around 100 to send them to provide a flying service with the US military, the US coast guard, the US forest service, and NASA. The US government may sell the repaired planes to foreign governments. There is a special Foreign Military Sales program for this purpose. On the processing front, the facility strips around 200 aircraft for spare parts and manages to salvage parts worth $500 million. The US government and military are the main customers for these spare parts. The US government requires permission from the US Congress to make any other sales.

Around 500 civil servants from the Department of Defence and 200 contractors work at AMARG.

Some famous aircraft at AMARG

After the North Vietnamese defeated them in the Vietnam war in 1975, the United States used this helicopter to airlift the last remaining Marines from the rooftop of the US Embassy in Saigon.

In its heyday, this aircraft had two well-deserved nicknames, the Weightless Wonder and the Vomit Comet. NASA used it for zero-gravity flight training for astronauts and the training wasn’t kind on the stomach. Used by the U.S. Navy, this aircraft was sent to Antarctica on a resupply mission and crashed there in 1971.

The US Air Force has been using these cargo jets from 1969 to the present day. These are huge planes, with heights of around 65 feet and wingspans of 222 feet. Regular access to AMARG is strictly limited to Department of Defence employees and people with the proper governmental permission and security clearance. However, the general public can visit the facility on the bus tour that the Pima Air & Space Museum conducts from Monday to Friday. You must make your reservations 10 days in advance and get a security clearance from the Davis-Monthan Air Force Base. In both cases, they will ask you for ID proof like a driver’s license for US citizens and a passport for Non-US visitors. The tour is accessible for handicapped people, but you must inform the museum in advance as they may need to make extra preparations.

The general public can also participate in annual running or walking sports events organized at the base. Or they can see it in various films and TV programs; AMARG is popular as a filming site.

Explore the area on Google Maps.

Enjoyed this article? Also, check out “The Disappearing Aral Sea and its Abandoned Ships“.