Chand Baori: A Quaint Remnant of the Past 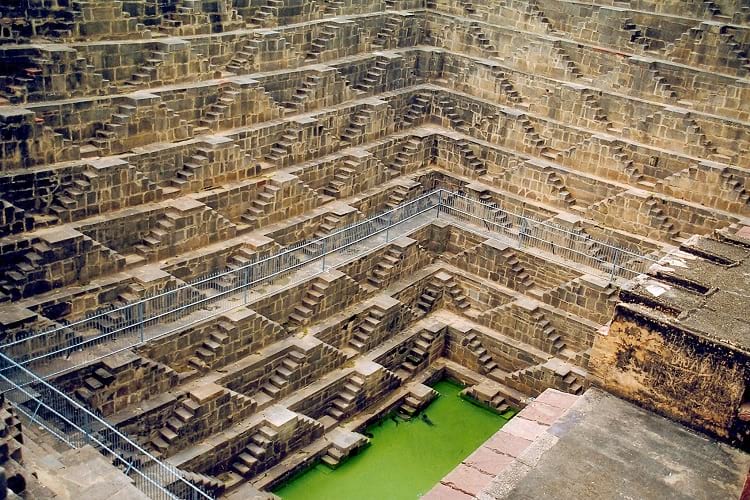 Located in the tiny village of Abhaneri in eastern Rajasthan, India, is the deepest stepwell in the world- the Chand Baori. This beautiful structure was built over a thousand years ago by King Chanda in the 9th century. Nobody is quite sure of its exact utility, apart from the obvious water-harvesting. Its location opposite the Harshat Mata Temple has led to the conjecture it might have had religious importance. Though the gigantic structure is not a functional well anymore, it has become a tourist attraction for its fascinating geometry. The stunning historical monument is under the protection of the Archaeological Survey of India (ASI).

The word ‘baori’ or ‘bawdi’ is used to refer to these unique stepwells found exclusively in this part of the world. Stepwells were a very popular method of water harvesting, along with the step-pond, back in the day. The stepwells usually have a very deep and well-rounded bottom to reach the low groundwater levels in the desert. Its narrow shaft is generally protected from direct sunlight by partial roof. A stepwell often developed into a mini-oasis with temples or shelters built into the complex.

The decline in the use of stepwells came about with the British Raj. The British colonists were appalled by the lack of sanitation. The same wells were used for bathing as well as to draw drinking water. Consequently, new stepwells were hardly built, and the existing ones were left to dry and decay. Soon, modern technology replaced the need for stepwells at all. 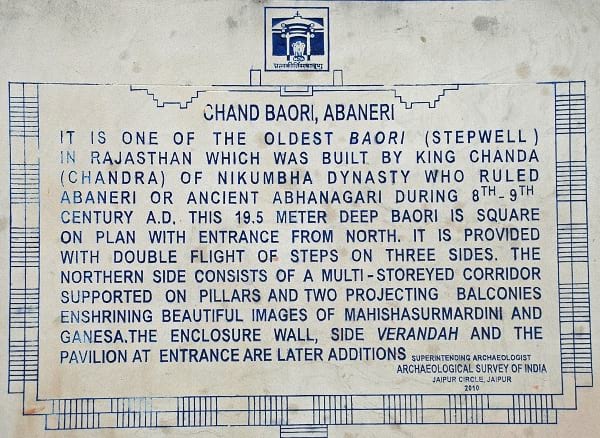 The Chand Baori is a square structure, with each side measuring to 35 metres.  From three sides, descend a series of 3,500 slender steps which go down 20 metres to the very bottom. This well has 13 levels and would have provided water year-round despite being located in an arid region. The mathematically precise geometrical structure of the baori is noteworthy, especially in that age. The symmetrically arranged steps create an intricate chiaroscuro effect that looks visually stunning. The stairs taper down to create an almost inverted pyramid shape. Interestingly, the temperature reduces as you go further down. The lower levels of the well are around 5 degrees cooler than the ones above.

The fourth side of the stepwell has a pavilion with a three-storeyed palace. It has intricately carved ‘jharokhas’ or hanging galleries, mounted on pillars, with two small balconies projecting out. This pavilion houses a lot of stunning sculptures as well. Incidentally, the rooms of this palace are inaccessible to tourists. The stairs have railings as well and visitors are not allowed to climb down beyond a point. The entire baori is housed within a rectangular complex, similar to a courtyard. 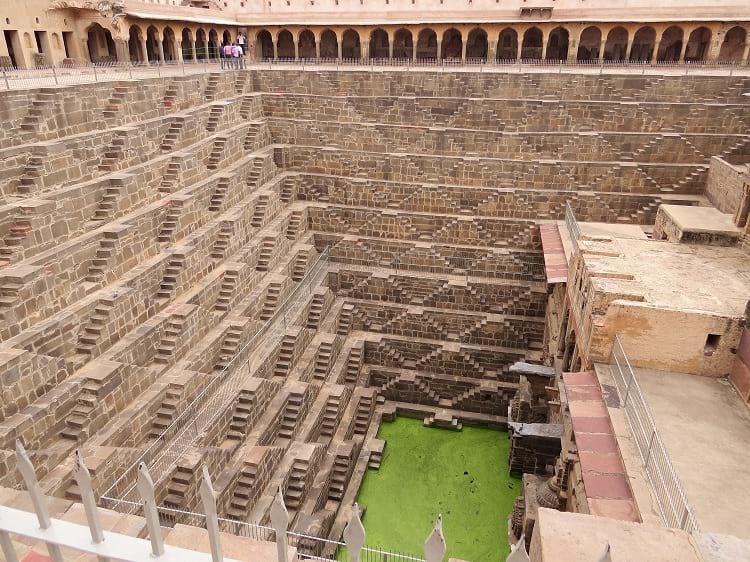 The history behind Chand Baori

The stunning Chand Baori Complex was built by Raja Chanda of the Gujara Pratihara clan, whom it derives its name from. This clan claims to have descended from Lord Laksmana, the younger brother of Lord Rama. The Baori was built right at the cusp of the Golden era of this clan.

The adjacent Harshat Mata Temple, a shrine to the Goddess of Happiness, provides context to the stepwell’s construction. The baori facilitated the Hindu tradition of washing hands and feet prior to entering a place of worship. The temple itself was razed in the 10th century by Mahmud Ghazni. The ruins still provide an insight into the traditional architecture and sculpting techniques of Ancient India. A rebuilt temple within the complex is now dedicated to Goddess Durga. The complex had a lot of structural additions in the later periods by the Mughals. The compound wall around the baoli, galleries, and cusped arches in the palace on the pavilion are all Mughal structures. These provide a very stark contrast to the sculpting style and trabeated arches used by the Chauhan rulers. 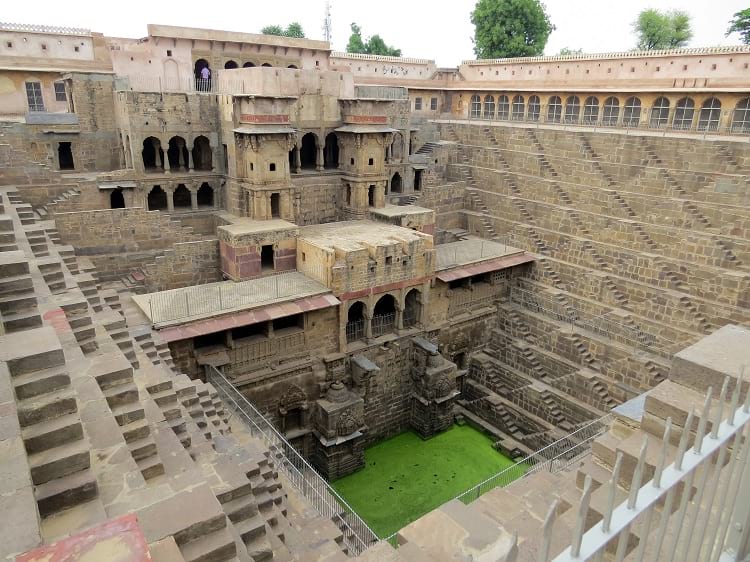 Apart from its stellar architectural and historical significance, the Chand Baori is also known for the folklore attached to it. Over the years, it has garnered quite the reputation as a haunted spot. The hundreds of shrieking bats inside the well’s shaft only add to the atmosphere. The famously haunted Bhangarh Fort is also on the route to the stepwell, just a few kilometres away. Thus, the Chand Baori has become a popular spot for horror enthusiasts and paranormal researchers. Legend has it that this monumental structure was built over the span of a single night- clearly inhuman feet. The locals put it down to the handiwork of a Djinn. Another lore says that a person going down the stairs cannot use the same steps to climb back up. Seemingly impossible, eyewitness accounts prove it is indeed impossible to climb back up using the same set of slender steps.

The interesting architecture of the Chand Baori has featured in popular movies such as Bhool Bhulaiya in Bollywood and The Dark Knight Rises in Hollywood. Its marvellous geometry has been a part of many notable accounts, such as that of Louis Rousselet, the famous French world traveller, and Morna Livingston, in her book Steps to Water: The Ancient Stepwells of India. Yet, it has hardly found a spot in the annals of history, for posterity to remember it by. The Chand Baori is definitely one of the hidden gems worth checking out in the historic city of Rajasthan, brimming with culture and heritage.

Enjoyed this article? Also, check out “Adalaj Stepwell: A 500-Year-Old Architectural Masterpiece With a Tragic Tale of Unrequited Love, Sacrifice And Loss“.