Padmanabhaswamy Temple: The Richest Temple in the World with Gold Worth $22 Billion in Six Vaults 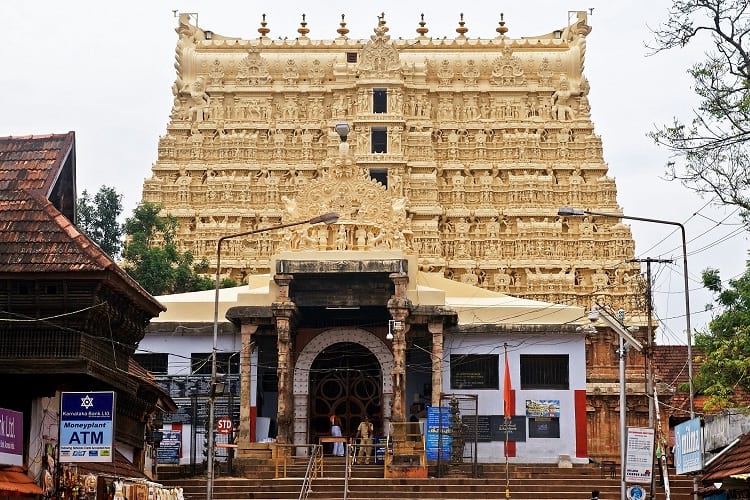 Dedicated to Lord Vishnu — the Hindu God who is the Protector of the Universe — the Padmanabhaswamy temple is one of 108 main shrines where the Vaishnavities worship. It is also one of the richest temples in the world. The temple has an estimated wealth of over one lakh crore rupees ($22 billion). All the temple’s assets belong to Lord Padmanabhaswamy and a special trust, under the Travancore Royal Family’s chairmanship, manages these assets.

In the temple, the deity is enshrined as Ananthashayi Vishnu. This literally means Vishnu lying in a supine position on the hooded serpent, Anantha Shesha Naga. And it is for this reason that the city in which the Padmanabhaswamy temple is located is called The Sacred Land of Anantha or Thiruvananthapuram. Also known as Trivandrum, the city is the capital of the Southern Indian state of Kerala.

The petition about the Padmanabhaswamy Temple’s wealth

In 2009, T. P. Sundararajan — a retired IPS of the 1964 cadre and, moreover, one who had been part of PM Indira Gandhi’s security staff — became concerned about the wealth of the temple after members of the Travancore Royal family claimed ownership of the temple. He was worried that the royal family would take all of the temple’s wealth into their own possession for their personal use.

As an ardent devotee of Padmanabhaswamy, T. P. Sundararajan took the matter to court. He filed a petition in the Kerala high court asking the state government to take over the management of the temple and its wealth. The royal family challenged this petition and the matter reached the Supreme Court.

In 2011, the Supreme Court stayed the petition to revoke control of the temple from the royal family. The Supreme court formed a seven-member team that included two former high court judges and a top state government official, authorities from the archaeology department and the fire services, and T. P. Sundararajan. The court directed the team to open the vaults where the wealth was stored and inventory it.

The vaults of Padmanabhaswamy Temple

Beneath the temple, there are six underground vaults and their antechambers. It is here that the temple’s management stores the temple’s hoard of gold. They have labelled the vaults A through F. Later, after the court appointed a team to check these vaults, they found that there were two more, previously unaccounted vaults. They labelled them as G and H.

The way to Vault A is through an opening in its granite floor. A granite floor slab must be moved first. There are stairs leading downward underneath. After going down these, the court appointed team found a chamber filled with gold coins, a variety of gold jewellery, and an assortment of precious gems. The treasures also included a diamond-studded gold throne, gold chairs, gem-encrusted gold crowns, gold chains, gold utensils, gold-threaded ceremonial attires, and more.

Nobody knows when Vault B was last opened, since the temple priests and the royal family refuse to say anything about it. The court appointed team encountered first a metal grille door and behind this, they came across a sturdy wooden door. Behind this wooden door, they found an iron door that was jammed shut. Before they could pry it open, the royal family got an injunction from the Supreme Court against opening vault B. Vaults G and H are also supposed to have remained closed for centuries.

Vaults C, D, E, and F are in the custody of two temple priests and they open the vaults at least eight times every year. They take out some of the gold for use on special ceremonial occasions such as temple festivals. Afterwards, they deposit it back into the vaults.

The priests and the Travancore Royal Family have not allowed a full inventory of the vaults so far.

The origins of the Padmanabhaswamy Temple treasures

Most of the temple’s treasures are believed to have been accumulated over a thousand or more years. Ever since the temple was built sometime before the 8th century, devotees have been donating gold and other valuables to the temple. Also, the Kings of the Chera, Pandya, Kolathiri, Pallava, Chola, and many other dynasties made generous gold offerings to the deity.

Furthermore, the Malabar region, known as Tamilakam in previous centuries, once had several major centres of trade and commerce, from Vizhinjam in the South to Mangaluru in the North. Traders from Mesopotamia, Rome, Greece, and other foreign locations regularly came and went. And they also made donations to the Padmanabhaswamy Temple.

Some of the temple’s treasures came from taxes collected by the Travancore Kings as well as from the bounty collected when they conquered other Kingdoms.

When Tipu Sultan invaded neighbouring Kingdoms, the royal families of those Kingdoms took refuge in Thiruvananthapuram. They also placed their wealth for safekeeping in the Padmanabhaswamy temple.

Between 1810 and 1813, Maharani Gowri Lakshmi Bai brought hundreds of temples that were mismanaged under the government control. Some of the wealth in these temples was transferred to the vaults of the Padmanabhaswamy temple.

The ownership of the treasures in the Padmanabhaswamy Temple

According to various Indian Acts and Laws, only the Central government has the right to manage any treasure of heritage value. This does not mean that the government can sell the treasure to make money. It has a constitutional obligation to preserve the treasure.

There are various suggestions floating about on what is to be done with the treasures in the Padmanabhaswamy temple. A scholar suggested that they should be placed in a museum near the temple for the public to view and historians to study. A former Supreme Court justice wants the treasure to be sold to raise money for social activities. Some conservation experts want to move the treasure from Kerala’s tropical climate and high humidity to a protected environment.

Hindu organizations say that the treasure belongs to the temple and should not be moved from its precincts.

Since there are documents that prove that most of the treasures were donated to the temple, neither the government nor the Royal family can lay claim to it. Everything belongs to the temple and to Lord Ananthashayi Vishnu.

Enjoyed this article? Also, check out “Batu Caves of Malayasia – The Largest Shrine to Lord Murugan Outside India“.

Previous Article
Hetty Green: The Richest American Woman Who Was Known for Her Extreme Miserliness
Next Article
Sarcastic Fringehead: Most Quarrelsome Fish That Has a Big Mouth