Adalaj Stepwell: A 500-Year-Old Architectural Masterpiece With a Tragic Tale of Unrequited Love, Sacrifice And Loss A stepwell has always held an important position in the history of Indian architecture, with the semi-arid states of Gujarat and Rajasthan occupying top spots, where one is likely to find these in the vicinity. A stepwell, which is also called a baoli or bawdi in Hindi language, formed an integral part of a city’s foundation, providing year-round access to basic water-related needs for locals in the nearby areas. The city of Ahmedabad in Gujarat is home to a renowned stepwell called Adalaj ni vav or Rudabai vav, which is not only an example of fine architecture but is also an ancient yet functional masterpiece in itself.

Initially known as Rudabai ni vav, the Adalaj stepwell came to be known by its current name owing to the quaint village it is situated in. The village of Adalaj is located approximately 20 kilometres on the outskirts of Ahmedabad in Gujarat, which gave the vav (in Gujarati language it means a well, which is accessed through a flight of stairs) its name. Construction work on the magnificent stepwell began during the late 1490s under the supervision of Rana Veer Singh of the Vaghela dynasty, who ruled over a kingdom in Gujarat called Dandai Desh during those times. His little empire was prone to frequent dry spells and insufficient rainwater was the only way in which Dandai Desh could meet the needs.

Rana Veer Singh ordered that a huge well be constructed on the lands nearby that would end their water-related problems once and for all. And so construction work on Adalaj stepwell began, with skilled masons and artisans employed to finish the job for the king.

No sooner did work start on the stepwell than tragedy struck their realm and a war with their neighbouring province broke out. Rana Veer Singh died in the battle, losing his land to a Muslim ruler – Mahmud Begarha, who later rose to prominence as the Sultan of Gujarat during the fifteenth century. After Rana Veer Singh’s passing, his wife, Queen Rudabai decided to complete the work on the stepwell in the fond memory of her late husband, but Dandai Desh’s and Rudabai’s problems had not ended there.

The tragic story associated with the Adalaj stepwell

Queen Rudabai had wanted to jump into her husband’s funeral pyre and commit Sati, but she held back and decided to finish work on the stepwell herself. When Mahmud Begarha, whose actual name was Abul Fateh Nasiruddin Mahmud Shah I, conquered Dandai Desh, he was totally smitten by the beauty of the queen and proposed marriage to her. Queen Rudabai laid out a condition that she would marry him if he allowed work on the stepwell to finish off first. And so under Rudabai’s supervision and on the orders of Mahmud Begarha, construction work on the Adalaj stepwell began again and was completed in the year 1498. The cost of building the vav was an estimated five hundred thousand rupees of that time.

When Mahmud Begarha reminded the queen of the promise she had made to him, she jumped into the waters of the stepwell thus ending her life. Mahmud Begarha did not want to demolish the architectural marvel that he had helped build and decided to keep it intact. It is believed that the six tombs, which one encounters on their way towards the stepwell, are those of the masons who had toiled hard to build the stepwell during Mahmud Begarha’s reign. Legends also state that the queen can be heard weeping at the base of the stepwell on a full moon night.

Specifications of the Adalaj stepwell

The Adalaj stepwell is a square piece of architecture towards the bottom that transforms into an octagonal structure towards the top. Hewn in sandstone and built in brick and mortar, in the Indo-Islamic style of architecture, a colonnade of pillars support the ornate octagonal edifice that descends five stories deep into the underground from top to bottom. Each floor is spacious enough to house a large group of people together at one time. More than five hundred years ago, women would come to fetch water at the stepwell, chat and catch up on their daily lives, along with travellers and pilgrims, who would find a way to rest overnight at the massive stepwell and pray. It doubled up as a resting and trading place and also served ritualistic and practical purposes. Today, tourists gather at the underground level of the Adalaj stepwell to soak in its beauty and splendour. 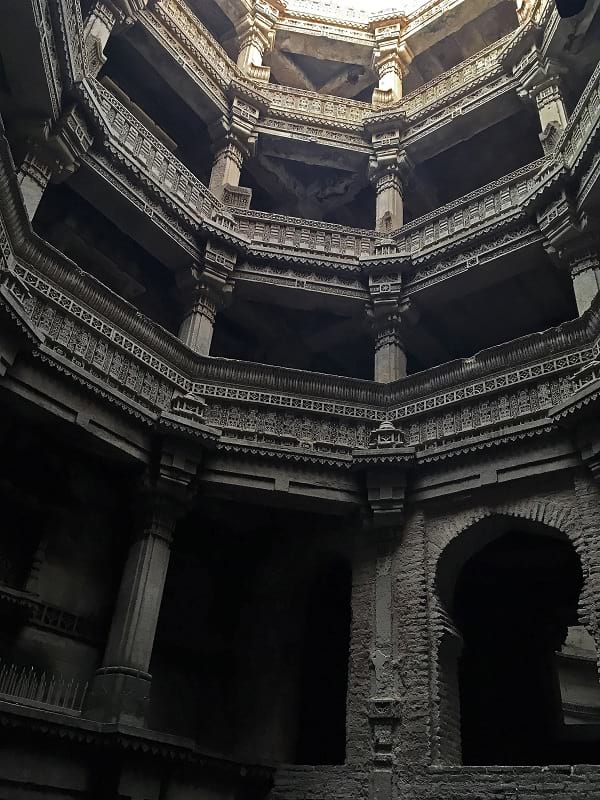 There are depictions of the day-to-day lives of people on the walls of the stepwell, along with carvings of Jain and Hindu iconography. Fused together with these on the walls are the floral motifs and geometric patterns from Islamic architecture that adorn the entire structure. The amalgamation of Hindu and Muslim designs together in one structure stems from the fact that Rana Veer Singh began work on the stepwell and Mahmud Begarha completed it; each adding his own cultural touch to it. The balconies of Adalaj ni vav are delicately detailed, the pillars or columns on which the structure rests are intricately designed and niches in walls house Hindu deities, which are aesthetically done, adding to the beauty of the already stunning stepwell. 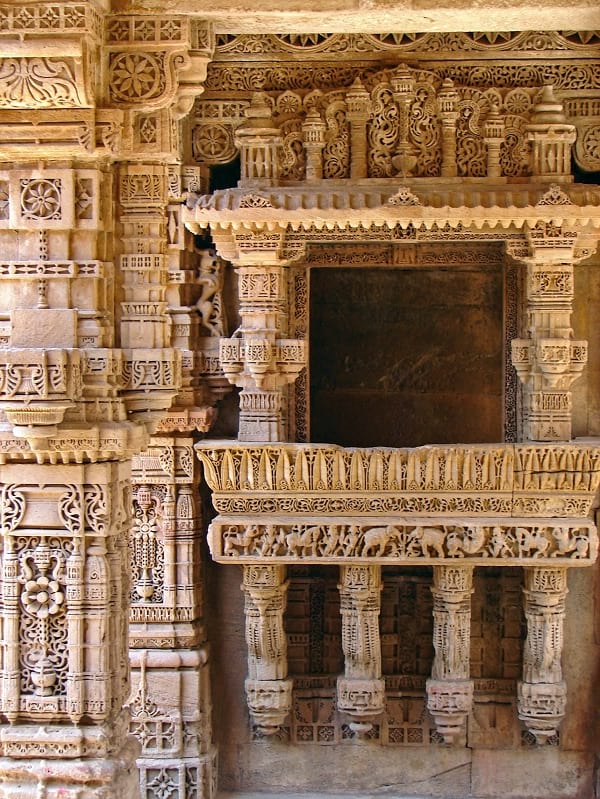 A decorated stone panel of the stepwell. (Itsmalay~commonswiki / Wikimedia Commons)

The Ami Kumbhor, which is also known as the pot that holds the water of life and the Kalpavriksha or tree of life (two important symbols from Hindu mythology) are the main attractions at the Adalaj ni vav, which have been elaborately carved out of a single slab of sandstone in the wall recesses. A few verses in Sanskrit are inscribed on the walls of the first storey, which narrate the tale of Rudabai’s sacrifice and her love for her husband.

The speciality of Adalaj ni vav

Apart from the many special attributes that the water shrine possesses, Adalaj ni vav has the distinction of being the only stepwell in Gujarat, which has three entrance staircases that lead to a stepped corridor. These three entrances converge in the underground pavilion at the first square-shaped storey, which rests just above the circular water tank. The well is connected to an underground aquifer that yields groundwater to the tank regularly. Cross beams run along the entire length of the corridors and passageways to support the structure above. The roof of the corridors has vents that keep the edifice well-lit and properly aerated. Small rooms at each of the landings have oriel windows for proper ventilation. Direct sunlight does not cast on the stairway landings except for a brief period of time during the noon. The upper storey of the stepwell. (Koshy Koshy / Flickr)

Built as a site where travellers could seek refuge from the harsh sun, Adalaj ni vav provides just that by blocking out the sunlight for the most part of the day. As one descends into the heart of the earth, the air starts to get cooler and the interiors of the stepwell always remain cool with approximately six degrees lesser than the outside temperature. Even though the spiral staircases are narrow and steep, giving a feeling of being confined in a tight space to some, at no point of time does it become darker inside so as to give rise to a problematic situation.

On the upper floors, scores of carved animals are on display, which forms a part of the Hindu mythology, but none looks similar to the other. The stepwell was carefully built more than five centuries ago, keeping in mind the utility that it would serve over a period of time. The artisans’ hard work, expertise and patience were at play while the Adalaj ni vav was under construction and the tragic tale of sacrifice and endless love associated with the stepwell only goes on to show that the country is replete with such masterpieces that are yet to come out of the dark.

Enjoyed this article? Also, check out “Chand Baori: A Quaint Remnant of the Past“.

Previous Article
Unit 731: Gruesome Human-Experimentation To Test Biological And Chemical Warfare In Japan During WWII
Next Article
Communism in Indonesia: The Destruction of the PKI