Kumbhalgarh Fort: Not Only China But India Too Has Its Own ‘Great Wall’ Built Centuries Ago 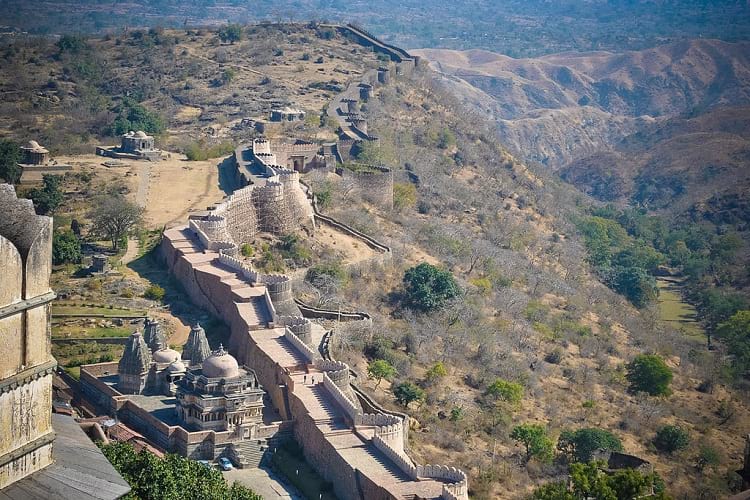 Kumbhalgarh Fort was built by Rana Kumbha in the 15th century. It is located 82 kms northwest of Udaipur, in Rajsamand town of Rajasthan in India. Close on heels of Chittorgarh Fort, it is the 2nd largest fort in Rajasthan. Surrounded by a huge serpentine wall, called the Great Wall of India, the fort was declared one of the UNESCO World Heritage Sites of Rajasthan in 2013.

Two historical icons of Rajasthan, father and son duo, had a fateful bonding with this place. Maharana Udai Singh II was 14 years old when he was running for his life and found shelter at this place. Subsequently, he became king of Mewar in 1540, right at this place and his eldest son, Maharana Pratap, the legendary hero of the battle of Haldighati, was born here.

The first fort of the Kumbhalgarh complex is believed to have been built by Samprati, a descendant of King Ashok in 2nd century BC. The subsequent additions till 15th century took the number to 84 forts. Among these, 32 were designed by Rana Kumbha and Kumbhalgarh fort is most outstanding of his creations.

Situated 3600 ft. above the sea level on a hilltop, Kumbhalgarh is surrounded by an uninterrupted 36 Km wall which is second only to the Great Wall of China in continuous fortification. Though 700 years old, it stands firm and strong as ever. Running like a snake in hilly terrain, the wall is thin at some places and exorbitantly thick at other sites. It is 15 to 25 feet wide and folklores say that 8 horses could run side by side on top of it. Construction of the wall took more than a hundred years and it was enlarged in the 19th century. Huge lamps lit on wall emitted enough light for the farmers of the valley to work at night time. Kumbhalgarh Fort separated Mewar (It extended from Ranthambore to Gwalior, including the vast area of the present day Rajasthan and Madhya Pradesh) from Marwar (Jodhpur region, Southwestern Rajasthan lying partly in Thar desert) and served as a refuge for the kings of Mewar in difficult times.

Fort has 7 imposing gates named, Aret Pole, Halla pole, Hanuman Pole, Ram Pole, Vijay Pole, Nimboo Pole and Bhairon Pole. While there are many gates in the fort, Ram Pol is said to be a piece of architectural wonder as almost every building inside is visible from there. Surrounded by 13 mountain peaks, it is home to temples of Hindu and Jain faiths, numbering 60 and 300 respectively. The palace top gives bird’s eye view of the surrounding Aravalli hills where, from walls, one can have a clear view of Thar Desert. A notable structure is Lakhola tank built by Rana Lakha in 1382-1421 CE. It is 5 km long, 200 meters wide and 60 ft. deep. Another water tank, Badshahi Bavdi, equipped with staircase, was built by Akbar in 1578. 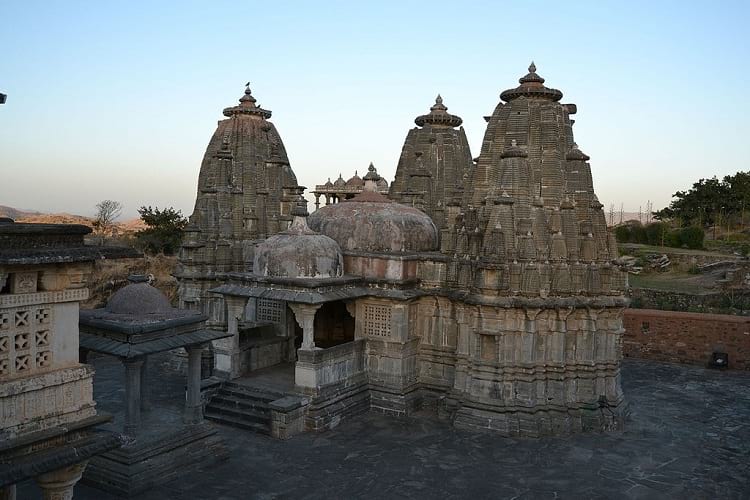 One of the temples inside the fort. (Uncle Alf / Wikimedia Commons)

Kumbhalgarh Fort: The tumultuous past

The Fort was attacked by Ahmad Shah I, the ruler of Gujarat in 1457. The attack was a failure but the temple of Banmata deity was destroyed. It was believed that the deity protected the fort from invaders. Conceived and built as hidden-fort for safety and battle advantage, it is visible only on a close approach.

Again in 1535, Bahadur Shah, from Gujarat, attacked and ransacked Chittor. Post this attack, efforts were made to put Chittor back on rails. Prince Udai Singh being too young for the crown, Banvir, a distant cousin was made interim ruler in 1536. But Banvir wanted to rule Chittor for long and hence, decided to kill Udai Singh. Panna Dai, the nursemaid of prince got an intimation of it and shifted Udai to a different location. When furious Banvir came searching for young Udai, she pointed to her own son sleeping on bed, his face covered. Her son, Chandan, was of the same age as Udai. Banvir killed the boy assuming it was Prince. Panna then left Chittor searching for a safe haven. Banvir was widely feared; hence none dared to help Panna and her charge, Prince Udai. In the long last she found shelter in Kumbhalgarh, several kilometres west of Chittor.

The saga of sacrifice, valour and carnivals

By sacrificing her son to save Udai Singh, Panna Dai saved the future of Mewar. Young Udai Singh became Maharana Udai Singh II of Mewar and went on to establish a township, named after him, Udaipur. His son, Maharana Pratap became a legend in his lifetime for his valour and patriotism.

A 3-day festival is organized every year by The Tourism Department of Rajasthan to highlight Maharana Kumbha’s passion for art and architecture. The festival is marked with concerts, dances, fort walk, turban tying, tug-of war, use of mehendi and many events of popular interest.

Enjoyed this article? Also, check out “Fort Montgomery: When North America Made a ‘Monumental’ Mistake on the Other Side of the Border“.

Previous Article
The Curious Disappearance of the Baghdad Battery: A Parthian Period Relic, An Oopart
Next Article
Bohemian Grove: A Club for the Rich and Powerful or an All-Male Secret Society?