The Curious Disappearance of the Baghdad Battery: A Parthian Period Relic, An Oopart 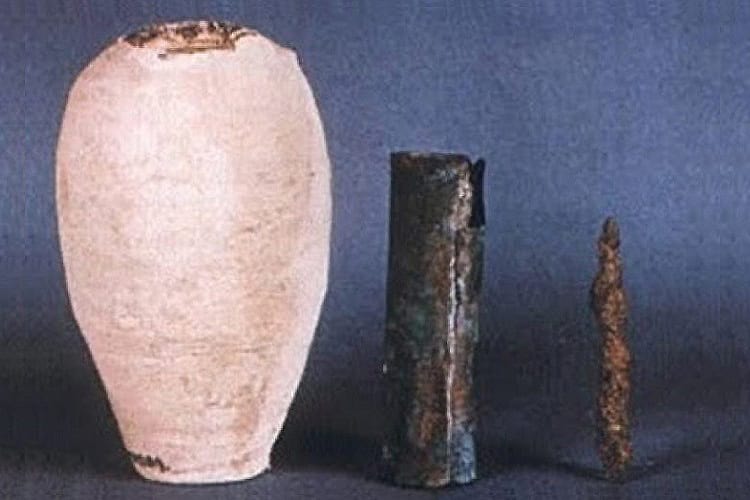 The interest in ancient civilisations heightened after the end of World War I, especially in Iraq. Evidence of human settlements goes back to several decades ago in Mesopotamia, also known as the ‘Cradle of civilisation‘. Archaeologists from Europe and the United States were executing excavations all over Iraq, in an effort to understand the beginning of civilisation. It was during this period that a German archaeologist rediscovered a puzzling artefact in a museum’s collectibles in 1936. Consisting of three parts, this was named the Parthian Battery or the Baghdad Battery.

What is Baghdad Battery?

The Baghdad battery is an unassuming looking earthen jar of 10 to 14 centimetres in height, with a copper cylinder inside. The copper cylinder further has a vertical iron rod. The battery is believed to have been used as an electric battery. It has been categorised as an oopart, an out of place artefact, due to the advanced level of technological knowledge it represents. An oopart is an ancient relic showing some skilled work from a period when it does not seem possible for people to have had that kind of knowledge.

Several of these batteries were rediscovered by Dr. Wilhelm König, stored in the Iraq museum. Upon inspecting it closely, he discovered that the iron and the copper were insulated from each other with an asphalt stopper. This led him to theorise that it was probably used as a battery for electroplating. If the vessel was filled with an electrolytic solution, a small current could be generated due to the voltage difference between the two metals. Putting out the idea that ancient civilisations were probably able to generate some form of electricity, centuries before human knowledge and technology could achieve it.

How was Baghdad Battery discovered?

Back in 1922, an archaeologist, Gertrude Margaret Lowthian Bell of Great Britain, started to store all dug up collectables in a government building in Baghdad. The government decided to move these priceless artefacts to another building and established it as the Baghdad Archaeological Museum, with Bell as the museum director. It was officially opened in June 1926, a little before Bell’s death on July 12, 1926.

More than a decade later, a German archaeologist, Dr. Wilhelm König was appointed as the Assistant Director of the Baghdad Antiquities’ Administration. He went on to take over as Director of the Baghdad Museum Laboratory in 1934 and subsequently discovered this battery. Later, he went on to publish a paper on it. By 1966 the museum had been further moved to a bigger two-story building and renamed National Museum of Iraq. What followed were the various experiments to determine the authentic use of the battery and its strange disappearance.

The experiments to prove the functioning of the battery

An engineer, Willard F.M. Gray came across Dr. König’s paper in 1940 and was fascinated by the concept of the Baghdad Battery. He was working at the General Electric High Voltage Laboratory in Pittsfield, Massachusetts at that time and decided to make a model of the battery. Studying the drawings and other details given by renowned rocket scientist Willy Key of German origin, Gray was able to recreate the battery. When he filled it with copper sulfate solution, he discovered that it could generate a small amount of electricity of 0.5 volts.

A fascinating fact was aired on the episode ‘Ancient Wisdom‘ of the British television series, Arthur C. Clarke’s Mysterious World on September 16, 1980. In this episode, German Archaeologist, Dr. Arne Eggebrecht said that after filling the battery container with grape juice, he was able to record a current of 0.87 volts. This led to the speculation that batteries were invented long before their known invention in 1799 by Alessandro Volta, further leading to the assumption that the batteries were probably also used during Egyptian civilisations where electroplated metals have been found.

Assumptions have been rife about the various uses of the battery. Ancient Greeks were known to treat pain with an electric eel, leading to the possibility of the batteries being used to treat pain. Some have suggested that the containers were merely holders for paper scrolls, with the paper wrapped around the iron rod and preserved by the copper jar. Theories of the battery being used inside idols of worship to inject a small current into those who dared to touch the Gods also did rounds.

The disappearance of the battery

A little prior to the invasion of Iraq on March 20 in 2003, the museum closed its doors to the public. Nearly 8,366 small items were hidden away at a storage location, sworn not to be revealed to anyone, by a few members of the staff. The larger ones that could not be moved and a few other items were covered with foam and rubber for protection. On April 10 in 2003, the museum was plundered and more than 10,000 items were stolen. One of those was the Baghdad Battery. An assessment of losses incurred and an investigation report was submitted by US Marine Colonel Matthew Bogdanos, who made an extensive list of the number of stolen artefacts. Bogdanos was convinced that the stealing had taken place in 3 parts in different instances.

Due to a local amnesty programme, and through seizures, around 3,037 items were recovered by January 2004. A year later, by January 2005, the museum had received another 2,307 items that had been stolen. On January 30 in 2012, 45 missing relics were returned to Iraq by Germany. However, according to the general director of the museum, Amira Eidan, nearly 10,000 antique national treasures were still missing at that time. The National Museum of Iraq officially reopened to the public in February 2015. One of the rare artefact that is still missing is the Baghdad Battery.

The purpose and the current location of the Baghdad Battery, both remain a mystery till date. The Baghdad Battery is just one of the many unexplained ancient phenomena that have been encountered by modern man.

Enjoyed this article? Also, check out “Yakhchal: The Indigenous Fridge of Middle-East“.

Previous Article
AMARG: The US Plane Graveyard Where Aircraft are Stored, Stripped, Repaired, and Restored
Next Article
Kumbhalgarh Fort: Not Only China But India Too Has Its Own ‘Great Wall’ Built Centuries Ago