Bohemian Grove: A Club for the Rich and Powerful or an All-Male Secret Society? Quietly nestled in one of the highly restricted areas on Bohemian Avenue in California, USA, this gentlemen’s club is one of the most secretive places in the world, which comes to life in mid-July every year. Known as the Bohemian Grove, this all-male club has very limited access to outsiders and nobody knows what goes on inside this vast property. The huge main gates are shut tight for two weeks with guests inside, isolated from the outside world. Rumours of human sacrifices and the place being haunted are some of the stories that make the club more mysterious than any such club in the world.

The 2700-acre property hosts members like heads of the state including a few former US Presidents, business leaders, military officials, political figures, and artists from various fields, media barons and people in power since the time of its establishment. The bohemian-styled club came into form as a summer getaway of sorts for men in 1872 in San Francisco, but after British artist Henry Edwards announced his relocation to New York City in 1878, members of the camp gathered at the present-day Bohemian Grove for his send-off party and made merry all night long, which became an annual practice ever since.

Located amidst a lush forest and surrounded with over 1000-year-old tall redwood trees, Bohemian Grove boasts of an artificial lake inside the property, where high-ranking officials deliver lectures on immediate public issues every once in a while. The club’s motto comes straight out of William Shakespeare’s ‘A Midsummer Night’s Dream’ – “Weaving spiders, come not here!”, which explains that all worldly occupation and business deals need to be kept outside the club and dealt with later, while men bond over topics of art and leisure inside. 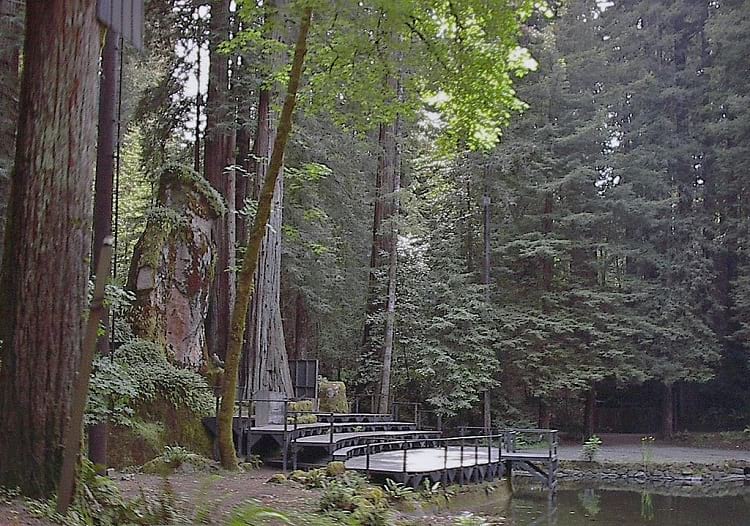 The artificial lake inside the property. (Aarkwilde / Wikimedia Commons)

Bohemian Grove sometimes allows guests, which could be a premium member’s family or friends that are allowed to stay inside only until dark, after which they are sent back. The membership of the elite club is also not easy to come by. One might need to wait for as long as 30 years to get one and an initiation amount of 25,000 USD, only after which he can become a part of the somewhat-secret society. Many known names such as Richard Nixon, Ronald Reagan, Calvin Coolidge, Will Irwin, Henry Kissinger, Gerald Ford, Herbert Hoover, Theodore Roosevelt, George H W Bush and Nelson Rockefeller have once been a part of the private club.

Divided into as many as 127 smaller camps, Bohemian Grove has its own kitchen, which serves scrumptious lamb, steaks and salmon delicacies each night, bars that offer some of the best wines, spacious dining areas, bathrooms, luxurious sleeping facilities and spaces reserved for relaxing right in the middle of the private property. Activities like golfing, canoeing, swimming, music and arts are reserved for bohemians, who catch up with each other in the strictly guarded campsite.

Until now it all seems like the club is like any other across the world, only that its members are some of the richest and most powerful people in the world. But what sets it apart are the ‘other activities’ that are carried out inside the grove. Phillip Weiss, a journalist working for Spy Magazine founded by Vanity Fair editor Graydon Carter, was once sent to gain access into the secret club to get to know more about its activities in 1989 when he came back with reports of some bizarre practices.

What happens inside Bohemian Grove?

Weiss reported that a peculiar opening ceremony at the man-made lake was carried out under the club’s mascot – an owl – symbolising worldly wisdom, which is a 40-foot moss-covered structure made of stone and steel. Known as Cremation of Care, the ceremony started off with burning an effigy of a wooden skeleton inside a coffin, which eased and relaxed the members as outwardly stress and care burnt right in front of them and also as a mark of respecting the forest. High priests dressed in bright red robes then sang songs with undertones of homosexuality. Another Texas-based filmmaker Alex Jones, who had found his way inside, vouched for the same and even claimed to have filmed the entire bizarre ceremony.

But that’s not all. If rumours are to be believed, Bohemian Grove is said to be a place where once a child was murdered in 1984. Several people who have only heard the stories claim the place is haunted by the child’s ghost. While there were no official reports of womenfolk entering the private club, many claimed that sex workers were secretly sent inside for entertaining their influential guests. After there were complaints of discrimination, the once all-male Bohemian Grove was ordered to begin hiring women and employ them accordingly.

As per reports in newspapers, in the September of 1942, Earnest Lawrence, the S-1 Committee and Robert Oppenheimer, which later became the Manhattan Project, met at Bohemian Grove that later changed the future of the world. In the wake of the bombing of Pearl Harbor in 1941, the S-1 Committee is said to have discussed and strategize the building of a nuclear bomb right inside the premises of the privately-owned grove a year later.

After a number of intruders tried to sneak inside Bohemian Grove over all the years, the security became tighter than ever before and reports of activities carried out inside the elite club have only been few and far between. Whatever shady businesses or proceedings go on inside the privileged club, it is but obvious that nothing worthwhile regarding one of the most secretive clubs in the world will ever come out from behind the closed gates.

Enjoyed this article? Also, check out “The Disappearance of Michael Rockefeller: One of the Most Enduring Unsolved Modern Mysteries“.

Fact Analysis:
STSTW Media strives to deliver accurate information through careful research. However, things can go wrong. If you find the above article inaccurate or bias, please let us know at [email protected]

Previous Article
Kumbhalgarh Fort: Not Only China But India Too Has Its Own ‘Great Wall’ Built Centuries Ago
Next Article
The Soyuz 11 Tragedy – The Death of Three Soviet Cosmonauts in Space