Travelling to where no man has ever gone before sounds glamorous in theory, but comes fraught with all manners of dangers and even fatalities in practice. In space travel, where we are confronting the unknown, it can be difficult and even downright impossible to predict how things are going to turn out, despite the most stringent preparations. The Soyuz 11 tragedy is an example of this, and the very first instance of humans dying in space.

Soyuz 11 and the first space station in earth’s history

The Salyut 1, which the Soviet Union launched into the earth’s lower orbit on 19 April 1971, became the first space station in our planet’s history. Now all that remained was to get people on this space station. The Soviets succeeded with this as well on 7 June 1971, when the Soyuz 7k-OKS, a spacecraft designed for space station flights, docked the Soyuz 11 capsule at the space station. An earlier space mission, Soyuz 10, had docked but failed to properly latch on and the cosmonauts had therefore been unable to enter the space station.

There were three cosmonauts onboard Soyuz 11: The Commander, Georgy Dobrovolsky, the Flight Engineer, Vladislav Volkov, and the Test Engineer, Viktor Patsayev. It was a first space flight for Georgy Dobrovolsky and Viktor Patsayev, and the second for Vladislav Volkov. As it turned out, unfortunately, it was also to be the last flight for all three.

Nobody had ever stayed in space on a space station, so it was a very big event when the Soyuz 11 crew not only docked successfully but also managed to latch on and enter it. They did encounter an immediate problem of a smoky interior due to a faulty ventilation system, but they soon fixed that problem. They had to retreat to their capsule and wait until the air cleared, but they were able to go into the space station and remain there after that. They stayed at the station for almost 23 days and, during this period, a large percentage of the public in the Soviet Union assiduously watched the televised broadcasts that the cosmonauts made. There was great curiosity about what it was like to live in a space station and the cheerful cosmonauts helped their audience experience it second-hand. In addition, the Pravda newspaper, the official newspaper of the Communist Party, published regular updates of the cosmonauts. They became very popular with the general public.

There were some problems at the space station, but the crew managed to deal with these. They put out a fire on the eleventh day of their stay and allayed the fears of the ground crew that they might have to abandon the station. The crew discovered that station vibrated from end to end when they used their treadmills. They postponed the launch of an N1 rocket. They remained healthy and in good spirits till the end of their stay and set the very first record for human endurance in space.

After what seemed to have been a very successful and illuminating space mission, everyone eagerly awaited the return of the cosmonauts. The Soyuz 11 capsule re-entered the earth’s atmosphere on 30 June 1971 and made a good landing on a flat, uninhabited plain in Kazakhstan.

The recovery team approached the capsule, which had landed on its side, and found it to be remarkably undamaged on the outside, without even a dent anywhere. They knocked on the capsule exterior, but there was no answering knock from within. Filled with foreboding, they forced open the hatch and found themselves confronting an unexpected and horrifying sight. The three cosmonauts were lying on their couches, seemingly unconscious, with blood streaming from their noses and ears and vivid blue marks on their faces. Commander Dobrovolsky’s body was still warm, which gave the rescuers some hope. They hurriedly removed all three from the capsule and performed CPR to try and revive them. It was to no avail. The three cosmonauts were already dead.

Death on the Soyuz 11

The ground crew had become concerned after losing audio contact with the cosmonauts as the Soyuz 11 capsule re-entered the earth’s atmosphere. They had come prepared for emergencies, but finding the crew dead in this manner was a shock. It seemed inexplicable too, given that the capsule was undamaged.

According to the doctors who performed the CPR, the crew had died from asphyxiation. Later, pathologists at the Burdenko Military Hospital carried out autopsies on the bodies and discovered that the cosmonauts had died from blood vessel haemorrhaging that occurred mainly in the brain, but also to an extent in the nose, ears, and skin. The haemorrhaging resulted from a sudden drop in pressure in the capsule’s interior; the blood vessels ruptured when the nitrogen and oxygen in the bloodstream bubbled from the pressure drop. The pathologists also found inordinately high amounts of lactic acid in the blood, signalling extreme stress before death occurred.

Data from the biomedical sensors on one of the cosmonauts showed that the cosmonaut had a cardiac arrest within 40 seconds of the pressure drop. The capsule’s interior pressure had dropped to zero within 15 minutes of the retrofire.

What had caused the pressure to drop though?

Cause of the decompression on the Soyuz 11

Investigators examined the capsule thoroughly to discover the cause of the decompression and finally found that it was due to the inadvertent opening of a breathing ventilation valve.

These ventilation valves were between the orbital module and descent module and the spacecraft engineers had designed them to shut automatically during descent. Alexei Leonov, the Commander of the original crew, had expressed doubts about this automatic shutting of the valves. He had advised the Soyuz 11 crew to not trust the automatic function and, instead, to close the valves manually. They had, unfortunately, either forgotten or disregarded this advice.

He had been right, it turned out. The automatic closure failed when the explosive bolts holding the orbital and descent modules fired simultaneously, instead of, as expected, firing sequentially. With the force of the simultaneous firing, the valve seal loosened and opened the valve when the capsule was at an altitude of 168 kilometres. The pressure inside the capsule dropped instantaneously. Since the position of the valve was in between the seats, the cosmonauts were unable to find and block it to prevent the air escaping from the capsule.

During the examination of the capsule after the tragic flight, Leonov tried closing the valve manually and discovered it took him up to a minute to do that. In an emergency situation, such as the one that the Soyuz 11 crew had encountered, a minute was too long.

The funeral of the Soyuz 11 crew

The mood of the nation turned from expectant joy to sombre grieving. Nobody had expected the events to take such a tragic turn. The Soviet government organized a massive state funeral for the three cosmonauts and the burial took place in the Kremlin Wall Necropolis in the Red Square in Moscow. They later received posthumous medals as Heroes of the Soviet Union. 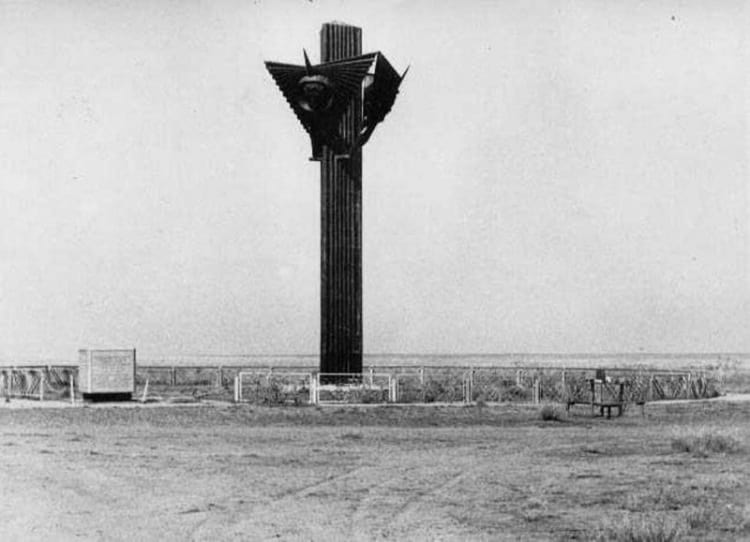 Soyuz 11 Memorial in Kazakhstan, built exactly where the module had been found. (Vikkom0203 / Wikimapia)

The Soviet state media did not announce the cause of their deaths until almost two years later.

The Soyuz 11 tragedy alarmed the US Americans who were preparing for their Skylab program. They assumed that the Soviet cosmonauts had died from their extended stay in a zero-gravity environment, and, of course, they did not want to risk the same thing happening to their astronauts. Charles Berry, a NASA doctor, discounted this theory. It was more likely, he said, that the cosmonauts had died from toxic inhalation. The space program authorities found this explanation more to their liking and continued with the space program.

Previous Article
Bohemian Grove: A Club for the Rich and Powerful or an All-Male Secret Society?
Next Article
Pink Lakes: Where Rose-Tinted Lakes Surrounded By Lush Greenery Are Truly a Sight to Behold