Why Were the Apollo 11 Astronauts Quarantined after Returning from the Moon? 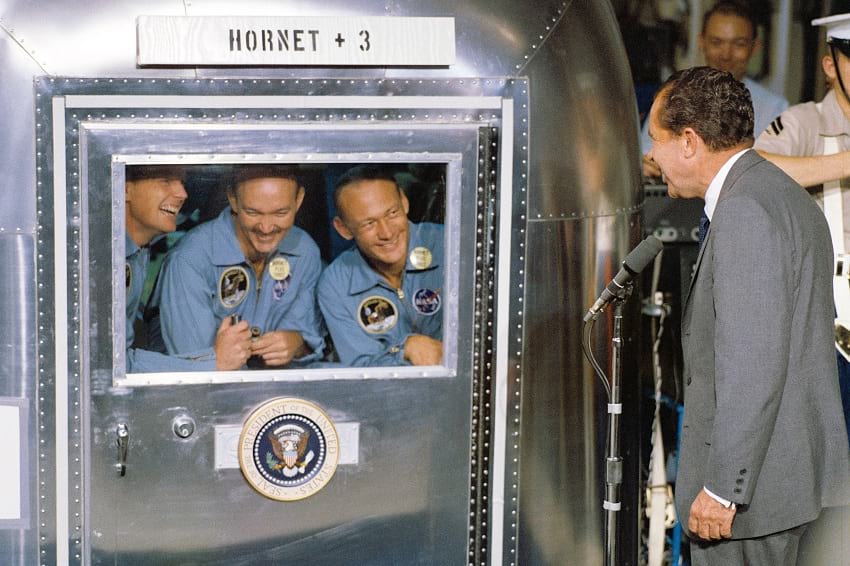 The Cold War was a tense political stalemate that lasted for many years, affecting the lives of millions of people all over the world. The Space Race was a significant element of the Cold War. It was an uncompromising competition played out by the USA and the USSR. In the beginning, the USSR was successful in a lot of space-related achievements. The Soviet cosmonaut Yuri Gagarin became the first human ever to go into space. However, the United States grabbed an enormous advantage on July 20, 1969 when they successfully managed to send astronauts to the moon as part of the Apollo 11 mission.

On July 16, 1969, the Apollo 11 mission was launched from Kennedy Space Center in Florida with the help of a Saturn V rocket. Apollo 11 was the fifth crewed mission of NASA’s ambitious Apollo program. The Apollo 11 spacecraft could be divided into three important parts – the command module (CM), the lunar module (LM) and the service module (SM).  The CM had a cabin where the three astronauts would reside and it is the only part which returned to earth. The SM provided the CM and LM with electrical power, propulsion, oxygen and water. This was achieved with the help of revolutionary hydrogen fuel cells. The lunar module (LM) had two stages – one for descent onto the lunar surface and the other for an ascent stage back into the lunar orbit. The crew consisted of Neil Armstrong, Edwin “Buzz” Aldrin, and Michael Collins.

The launch was viewed by at least a million spectators from the highways and beaches close to Merritt Island. Many dignitaries were present at the launch, including former president Lyndon Johnson and his wife Lady Bird Johnson. On July 19, the Apollo 11 spacecraft passed by the moon and fired its propulsion systems and entered lunar orbit. The Sea of Tranquillity was selected as the landing zone because earlier surveys had established the place as relatively flat and smooth.

The lunar module landed on the lunar surface at 20:17:40 UTC. Consequently, the Apollo 11 mission allowed human beings to set foot on the moon for the first time- with astronaut Neil Armstrong making history as the first man on the moon, soon followed by astronaut Edwin “Buzz” Aldrin.

The lunar module made its ascent and rendezvous with the CM on 21st July 1969.

The USS Hornet, a US Navy aircraft carrier was selected as the primary recovery and rescue ship for the Apollo 11 mission. The Mobile Quarantine Facility (MQF) was also placed on-board of the recovery ship. At the time, NASA did not know for sure that the conditions on the moon were completely sterile. They considered that there was a chance of the Apollo astronauts bringing back alien pathogens with them from the moon. For this reason, NASA extracted the astronauts and immediately placed them in Biological Isolation Garments (BIGs). Then, they were placed in a life raft. In the life raft, the three astronauts were rubbed with sodium hypochlorite (bleach). The Columbia was rubbed down with Betadine so as to remove even the faintest traces of lunar dust. The astronauts were subsequently transported by helicopter to the USS Hornet, which was lowered into the hangar bay via the ship’s elevator. The astronauts walked 30 feet to the MQF. They had to stay in their BIGs until they were safely situated within the MQF. For good measure, the life raft that carried the astronauts was also shot and drowned. Apollo 11 astronauts exiting the recovery pick up helicopter to board the U.S.S. Hornet aircraft (NASA) 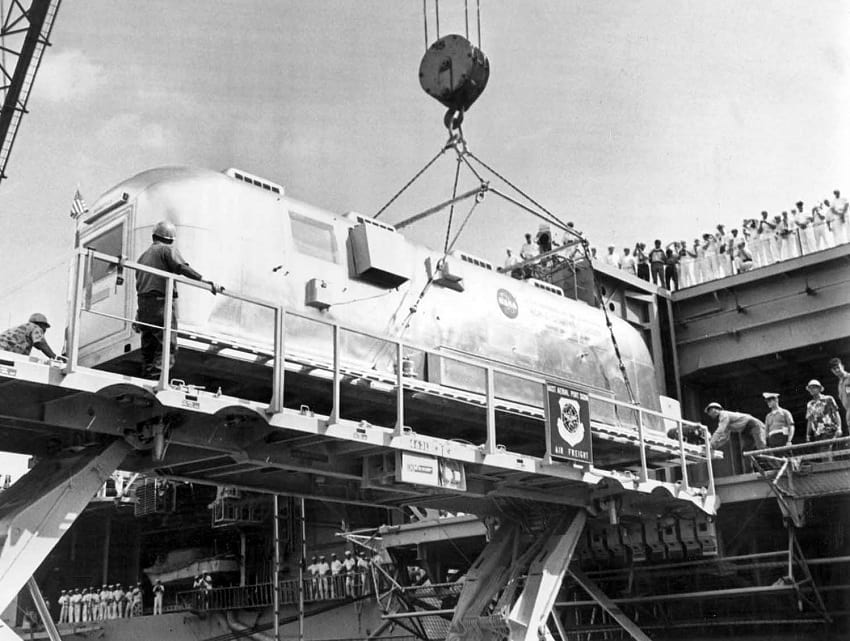 What is the Mobile Quarantine Facility (MQF)?

After Nixon departed, the Columbia (CM) was lifted by crane and placed next to the MQF. They were both connected by a flexible tunnel so that the astronauts could retrieve the lunar samples, data tapes and photographic film. When the Hornet returned to Pearl Harbour, the entire MQF was airlifted to the Lunar Receiving Laboratory (LRL) situated at the Lyndon B. Johnson Space Center in Houston, Texas.

The Extra-Terrestrial Exposure Law was the popular name for the set of official regulations adopted by NASA during 1969-1977. As scientists did not exactly know that space and the moon were completely sterile, they did not want the astronauts to bring back any dangerous pathogens. According to this law, the 21-day quarantine process of all moonbound astronauts was made mandatory. In 1977, it was proved beyond any doubt that the moon was completely sterile and NASA removed the Extra-Terrestrial Exposure Law from its set of regulations. Following this, the US Government also removed this law from its federal regulations.

Reason for revocation of the ETE law

The lunar samples brought back during the Apollo 11 mission were analysed thoroughly by scientists at NASA. After extensive testing, it was established without any doubt that the moon was completely sterile and there were no life forms of any kind residing in the lunar samples. The entire reason for the quarantine of the Apollo 11 astronauts was to prevent the spread of “space germs”. Although it can seem preposterous now, it was a necessary precaution that had to be taken for the safety of everyone else.

All three astronauts rode in ticker-tape parades organised in their honour in New York and Chicago on August 13, 1969. On the same day, there was a State Dinner organised in their honour which was attended by members of Congress, foreign dignitaries and important US politicians at the Century Plaza Hotel at Los Angeles. President Richard Nixon and Vice-President Spiro Agnew presented all the three astronauts with the Presidential Medal of Freedom. Putting humans on the moon is one of the most significant scientific achievements of the 20th century and it is awe-inspiring. It is also a remarkable endeavour, considering that humans had invented reliable flight technology only fifty years ago.

Previous Article
Golden Bridge: The Connect to the Past and the Future of Vietnam
Next Article
Victor of Aveyron – The Feral Boy from France