Skylab: The Space Station that Failed in Spite of Brilliant Conception and Brave Execution 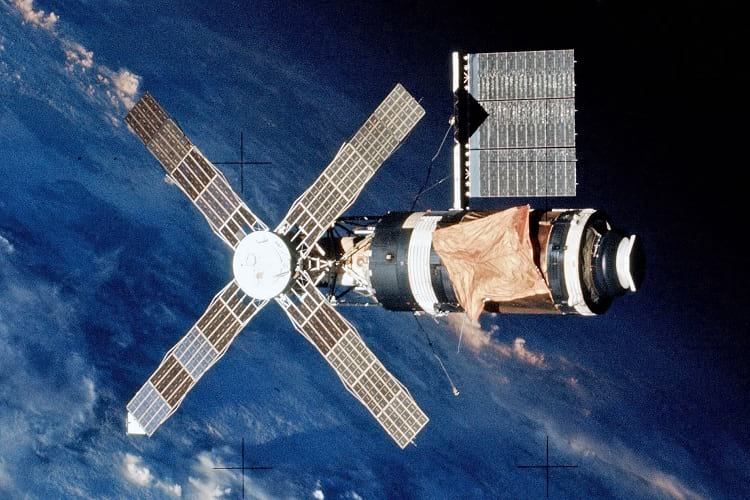 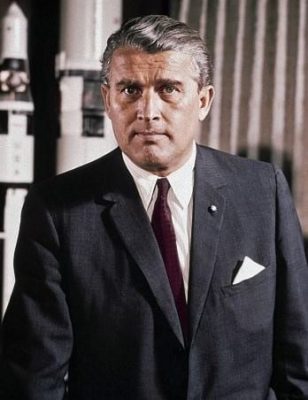 If well-begun means half done, shoddy beginning implies poor result. And that’s what happened with Skylab, America’s first and last space station. The idea of a midway stopover in space missions to the moon and other celestial bodies came from the German-American Scientist Wernher von Braun in the 1950s. The idea found expression in a hugely popular Hollywood movie ‘2001: A Space Odyssey’, released in 1968. The cold war to dominate earth’s outer space, unfortunately, compelled President John F. Kennedy for straight-to-moon- mission rather than work on a protracted project of the space station. Hence the trust in Apollo program. Yet Skylab remained on the back burner, to be picked up in the future. It indeed was picked up, but only to be closed down for good.

The concept was cornered by cold war considerations

The National Aeronautics and Space Administration (NASA), to begin with, deliberated that space station should be created in space itself. The empty fuel tank of the old and spent space craft floating in space could be converted into a fully staffed and equipped research lab.

The idea was given up to give priority to military reconnaissance over space research. With man landing on the moon in 1969, budgetary constraints propped up. The incumbent President Richard M. Nixon curtailed NASA’s space program. Only one space station, the Skylab, was given a go-ahead signal.

Skylab, a prefabricated laboratory, weighing 170,000 pounds (heaviest spacecraft till date) consisted of 4 major parts: 1. The Orbital Workshop (OSW), 2. The Airlock Module (AM), 3. The Multiple Docking Adapter (MDA) and 4. The Apollo Telescope Mount (ATM). OWS was the main living compartment of the crew. It was supplied with 12.4 kW of electrical power by 2 large solar plates attached to it. AM helped cosmonauts walk in space. MDA carried docking port for the Apollo spacecraft and experiment package of earth resources. ATM carried Telescopes and solar plates for supplementary power.

Diagram of Skylab and its components. (NASA) 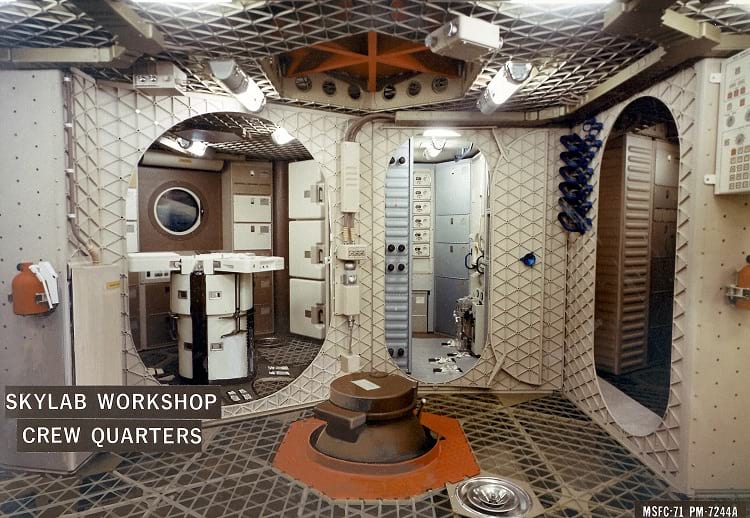 Running into trouble soon after takeoff

Skylab was put into space by the launch vehicle, Saturn V on May 14th, 1973. Just 63 seconds into the air post blast off, the first problem cropped up. Micrometeoroid shield, the protective cover and the thermal insulation of Skylab, came off. One of the two solar panels too broke loose. Nevertheless, the Skylab was ferried to space and put into orbit within 10 minutes of the takeoff.

Herculean efforts were made to repair the damage

As programmed by the mission control, solar plates/assemblies and ATM were set in order. However, in OWS, these assemblies were unkempt and could generate only 25 watts of power. Thermal protection already crippled with the ripping of micrometeoroids, temperature inside the lab rose alarmingly. Shorn of required electric power and temperature-control, Skylab was heading for disaster. Initial damage control efforts either restored the power, or the temperature; not both simultaneously. Luckily, the problem was solved with a workable compromise.

In view of the impaired status of Skylab, now orbiting the earth, visit of the first crew to it was deferred by 10 days. The 3-man crew comprising of Charles ‘Pete’ Conrad (commander), Paul J. Weitz (Pilot) and Joseph P. Kerwin (Science Pilot) geared-up to make the Skylab fit and functional. They carried an improvised thermoregulatory system and installed it in the lab.

Installing the system was an act of daring spacewalk; a laudable achievement indeed. Marshal Space Flight Centre, Huntsville, and Johnson Space Centre, Houston, worked in tandem with the crew. Micrometeoroid shields, ostensibly, were damaged by supersonic air currents. The scientists felt that more should have been done for the aerodynamics of Skylab before its launch. It was a daring spacewalk and laudable achievement.

Skylab workshop, orbiting in space, was visited by 3 different space flights, each carrying 3-men crew. Visiting astronauts were veterans as well as rookies. They spent 171 days and 13 hours in the lab conducting hundreds of experiments on subjects including human adaptability to zero gravity, solar energy and resources on earth. A record stay of 84 days in orbit was achieved by the third crew.

Life on Skylab was easier than what popular perception may hold for space travellers. Astronauts could eat, drink, bathe and attend to call of nature with the same felicity as on earth. They dressed in casuals and worked on exercise equipment for fitness. But there was a flip side too. The last crew was all-rookie and didn’t jell with mission control. The work targets couldn’t be achieved as zero gravity proved more cumbersome than anticipated. The misunderstanding reached to the point of no communication, which was widely perceived as the incumbent astronauts going on strike. Ergometer bicycle for exercise in the Orbital Workshop. (NASA / 7030269)

What led to the perception that the 3rd Crew of Astronauts was on (space) strike?

A 90-minute no-response from 3 rookie astronauts to the Mission Control in Texas on December 28, 1973, led to hullabaloo in NASA. Were the astronauts defying command, and resorting to strike in space?

Not really, as transpired that no-response was on account of a technical glitch because just as the Skylab completed a circle around the earth, communication Astronauts was re-established. The 90 minute disconnect on that fateful day, said one Astronaut on board, was an unintended technical error on their part.

Apart from technical problems time and again, the crew was clearly ill at ease with mission control on earth. Their discomfiture began on the very first day of their arrival on Skylab. They found mannequins carrying their nameplates, a way of their predecessor, Skylab 3 crew, pranking them. Add to this the huge workload assigned to them, as it would be the last lap of Skylab mission, and the mental pressure on the rookie crew can be understood. 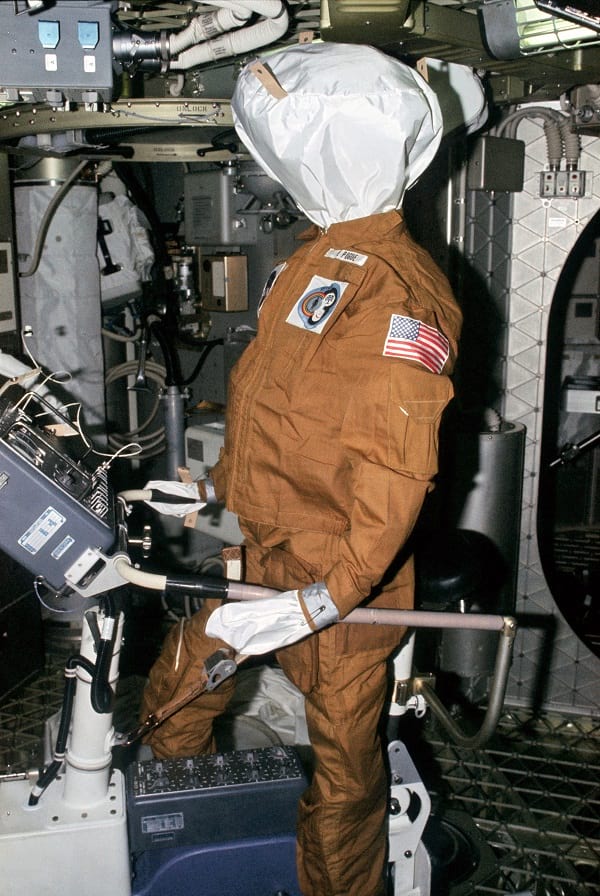 The crew, unlike other missions, had no space-veteran. It was snubbed time and again, and denied encouragement and feedback by the mission control. Work overload seemed a natural reaction of NASA as the mission was supposed to be called off shortly, and the mission control wanted to draw maximum work from the men in space. The crew worked overtime to their threshold capacity. Their dress and accessory were a misfit and the irritation showed in their body language. Their bosses construed it as indiscipline and called them lazy and careless. That, surely, heightened misunderstanding. By no stretch of imagination was it a ‘strike in space’, as the very idea of such strike was untenable and foolhardy. NASA too finally relented that the Astronauts were indeed overworked and stressed out.

Falling Skylab created commotion all over the world

The consistent efforts of NASA notwithstanding, Skylab suffered delays and derelictions. Nature too seemed unfriendly. The hot and expanding atmosphere messed with lab’s orbit around the earth. Scientists anticipated putting Skylab into a higher orbit. But doing so would take time, and the lab had already tipped to fall on earth by 1979. That put a stop to prospective salvage operations, and the people world over waited for the fall with fear and anxiety.

The D day arrived on 11th July 1979. The debris of Skylab fell over the Indian Ocean and Western Australia. There were fears that it could fall in South India. There were reports of people sporting a metallic hat to guard against the debris of the free-falling Skylab. Tragicomic reports of people hurrying up with their important assignments, well before the lab could come in their way, appeared in newspapers. Thankfully, the falling of Skylab didn’t harm any life or property on earth.

Skylab project surely didn’t end on a planned and positive note, yet the repertoire of knowledge and space experience it generated can’t be ignored. Especially so because the project parried several cliff hanger situations in spite of the low downs of the budget and the human resource.