Laika the Canine Cosmonaut – From the Streets to the Stars 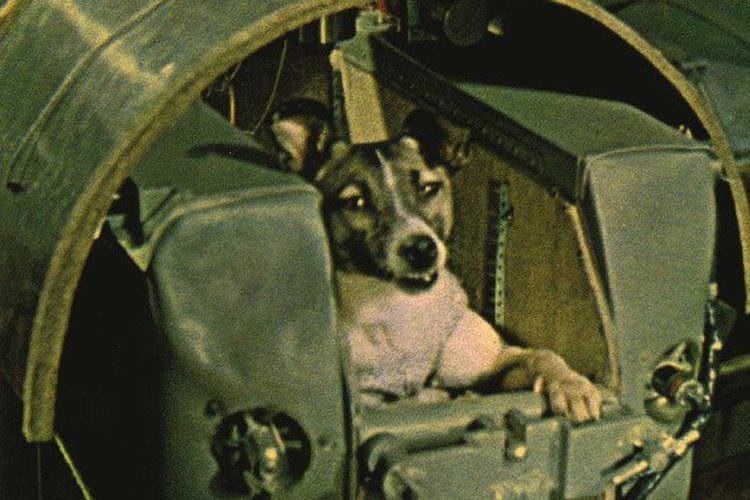 Laika training for her expedition. (NASA)

We all know the names Buzz Aldrin and Yuri Gagarin for being – conspiracies aside – some of the first people into outer space. Gagarin from Russia is considered the first man to orbit Earth in 1961 and in 1969 the Americans: Aldrin and co-pilot Neil Armstrong set foot on the moon. They paved the way for what is now a golden age for space travel with ideas hatching for passenger flights and plans to colonize other planets. But who paved the way for them?

Less is known about their counterparts, animal astronauts who have also voyaged – albeit forced – into the unknown, many in the name of the Space Race between the aforementioned countries. The most famous of these was a little Russian dog called Laika. In a time when conditions in space were unknown, Laika was chosen as a Guinea Pig before any human had made the jump. She was picked from the streets of Moscow to join the Russian space mission Sputnik II in 1961.

According to the crew, Laika was around three years old, a mongrel female and unlike her name suggests [Barker] remained very quiet. Found in the Russian capital, her exact breed is unknown but almost certainly a cross between a terrier and some type of husky. Stray dogs were commonly used in previous preparatory missions because they can handle severely cold conditions and are ultimately less demanding.

The program picked a small female in terms of space-saving (for a spacecraft about the size of a washing machine, even leg-lifting was a factor). The good-natured mutt was quickly loved, birthing several Russian nicknames including Kudravka meaning Curly, Damka – Little Lady and Limonchik for Little Lemon. Muttnik would be her catchy handle in the English speaking world.

Read more: The story of the first primate in space that paved the way for manned spacecrafts.

The spacecraft Sputnik II would launch from the Baikonur Cosmodrome in modern-day Kazakhstan to test various cosmic conditions as well as the effects of space travel on an animal. The first Sputnik mission proved a success in orbiting the Earth and the second vowed to go further with a living creature in tow. Ultimately, Laika was a precursor to Yuri Gagarin, whose mission was already in the pipeline. Previous missions had also included dogs but they only reached suborbital conditions, this was to be a major step up. Veteran pups of those missions including a hound called Albina were to be backups. (Rumours say the crew got too attached) Model of Sputnik 2 in which Laika travelled to space. (Laika ac / Flickr)

As launch day approached the darkness of the voyage soon began to sink in and there were protests around the world regarding the lack of humanity in proceedings. Such a mission today would cause an uproar, especially with the training which was brutal and by modern terms completely inhumane.

However, it was a different time back then, especially behind the Iron Curtain, with fewer objections aided by Cold War secrecy, Space Race obsession and a lack of Red Tape. Presumably, there would have been more protestation if people knew the truth. The truth that returning to Earth was never planned for Laika (a secret kept until 2002).

The crew have spoken more about this in recent times. They claim that the Soviet Union leader at the time, Nikita Khrushchev urged them to speed up the mission to coincide with the 40th anniversary of the Bolshevik revolution. It made several plans impossible to complete but Khrushchev was not a man to deny. In what was a cruel mission it is clear to see that the crew came to love the dog, whilst having to remain professional. They made a plan to euthanize her with a poisoned last meal if she suffered too much. They also made her a window. One scientist and trainer, Dr.Yazdovsky wrote that he took Laika home to play with his children on the night before launch.

“Laika was quiet and charming… I wanted to do something nice for her. She had so little time left to live.” he said.

The next morning was a Red Letter Day as the crew lamented and said their goodbyes. Sputnik II launched. Everything on board was monitored including Laika. At the start of the expedition, her heart understandably raced as the craft left Earth’s atmosphere but soon after, she started to calm. Her heart slowed and she continued to relax once reaching weightlessness. For the first time ever, a living being was orbiting Earth. She had made history. Within her harness, floating in Zero Gravity, Laika would have seen the blue and green of Planet Earth the way no-one had seen it before.

Perhaps she knew it was trees and water. Of course, the dog would be oblivious to the incredulity of events, and there is no doubt it was a traumatic experience but at least Laika felt some relief shown by her breathing. She even had some food before disaster finally struck. Her little heart started to race again and as temperatures rose, her panic took over. Eventually, there was no pulse detected and she was at peace.

The technicalities of her death are varied, it is simply claimed that overheating due to certain machine failures occurred approximately five hours into the flight. Laika’s death would have been a relief, also to many of the scientists once problems arose. The capsule became her coffin and after five months and over 2,000 orbits, they disintegrated upon reentry to Earth in 1958.

Her death did not go unnoticed. Future space missions carrying animals were immediately made to be recovered after Laika’s death weighed heavy on the national conscience. As time went on more reforms took place and the callousness of the mission has forced many people to look back with regret none more so than the crew. Oleg Gazenko explains,

“Work with animals is a source of suffering to all of us. We treat them like babies who cannot speak. The more time passes, the more I’m sorry about it. We shouldn’t have done it … We did not learn enough from this mission to justify the death of the dog.”

Making such a difference for the greater good of the world would have been lost on Laika but she contributed more than most to the development of our world. Perhaps not in terms of aeronautics or space exploration but for animal rights and awareness, the little terrier became a martyr. 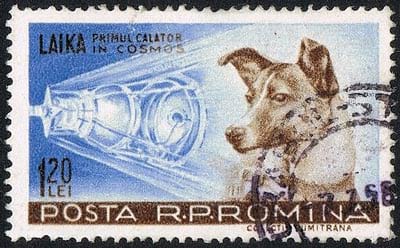 Laika on a Romanian stamp from 1959. (Wikimedia Commons)

She made the world remember that whatever we can achieve, we must do so humanely. She lives on in Star City, Russia, at the Russian Cosmonaut facility. There, a statue has been erected while all around the world Laika has been immortalized on items from posters to stamps.

Read more: Sex in space – is it possible? and why it is important