Why the Apollo 11 Astronauts Went through Customs & Immigration after Entering Earth?

What happens when you return from where no man has ever gone before? You must toe the bureaucratic line and go through customs. In 2009, the U.S. Customs and Border Protection Service website marked the 40th Anniversary of the Apollo 11 mission by posting the customs form signed by the three Apollo 11 astronauts.

The return of the Apollo 11 astronauts

On 24 July 1969, Neil Armstrong and his fellow astronauts, Buzz Aldrin and Michael Collins, returned to Earth after completing the Apollo 11 mission. The crew brought their space shuttle down in the Pacific Ocean, 1480 km to the south-west of Hawaii, where the U.S. Navy ship, the USS Hornet, picked them up. It took two days—during which the astronauts remained quarantined in a NASA trailer to prevent the spread of any moon germs and diseases they might have inadvertently brought back. The astronauts emerged from the trailer in biological containment suits and disembarked from the ship and travelled to Houston for a further three weeks’ quarantine.

According to popular lore, when they got back to the USA, the three astronauts had to go through immigration and fill out customs forms. Not only that, but they had to declare their cargo too. As it turns out, no, this did not happen. The astronauts were not bogged down by any customs paperwork on their return.

The customs form on the U.S. Customs and Border Protection Service website is authentic, of course, but it was more of a practical joke than a requirement. The Customs Service’s District Director for Hawaii created it, and, although the form gives its filing location as Honolulu Airport, the astronauts signed it with an auto-pen at the NASA headquarters later that year. On the form, the three astronauts listed Cape Kennedy, Florida, as their starting point and mentioned that they visited the moon for a stopover. They also noted moon rocks and moon dust as their space cargo. 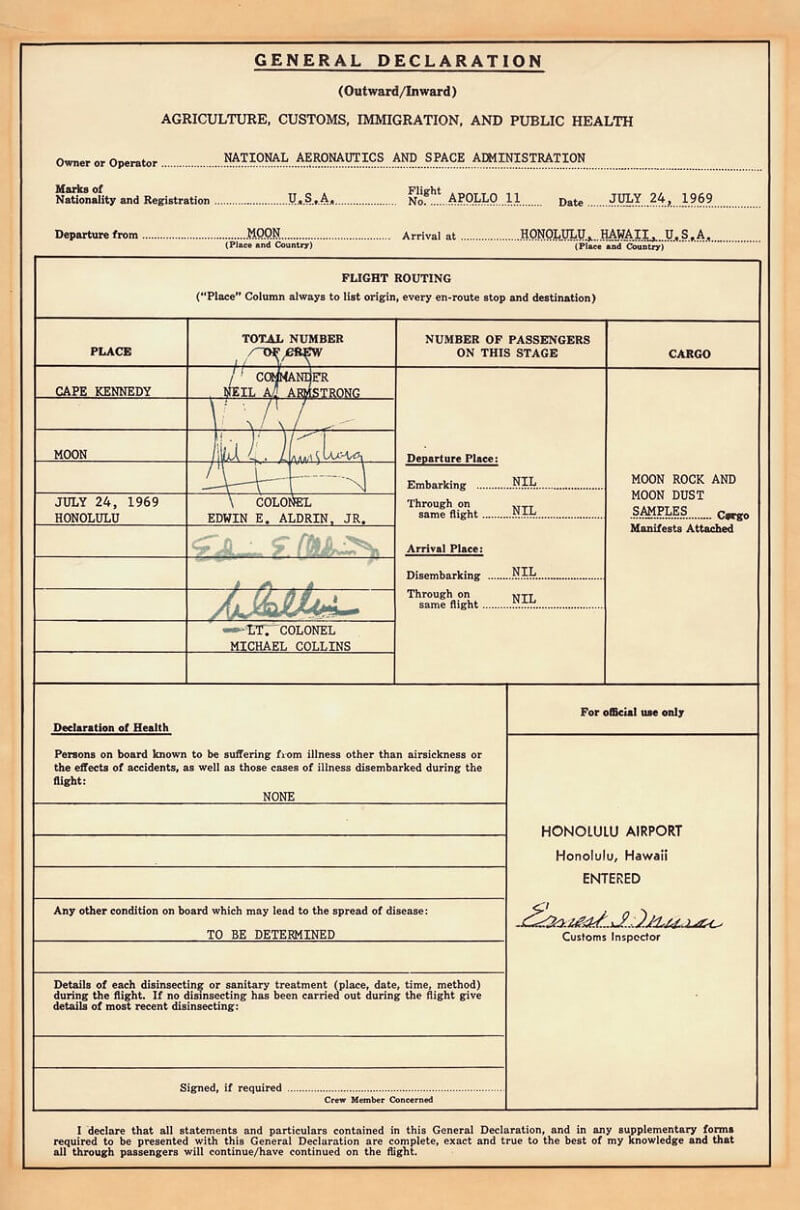 Currently, it is a regular process for astronauts to go through customs. Not to travel into space, but to reach the training and take-off destinations on Earth from where they can begin their space missions to the International Space Station. Space astronauts train, at present, in the USA, Canada, Europe, Russia, and Japan, and they have to through immigration during the routine flights back and forth.

Previous Article
Was Atomic Energy Kit the Most Dangerous Toy Ever Made?
Next Article
The Nasir al-Mulk Mosque Hosts a Kaleidoscopic Play of Lights Reflecting the Morning Sun