The Commanding Officer of HS-4, Donald S. Jones, had been handed over the task of developing an astronaut recovery programme by NASA for Project Apollo. The big anti-submarine warfare Helicopter 66, with a twin-engine was spacious and powerful. It seemed to be the perfect safe choice to fly at night and in all weather with versatility.

Helicopter 66 was incorporated with a watertight hull that gave it the advantage of also being able to take off and land on water. It also gave the aircraft the ability to hover over water or float for a long period of time with airbags that were fitted into the sponsons.

Sponsons are short subsidiary wings that help in stabilising a seaplane or in this case, a rotorcraft. The helicopter also had wheels fitted in the sponsons for customary land operations. The twin engines facilitated the heavy, large body of the helicopter and ensured uninterrupted flight in case of a single engine failure.

The Helicopter 66 or Helo 66 as it was commonly called had the ability to accommodate 22 individuals in a search and rescue with 9 stretchers plus ample room for 2 medics. This made it the ideal bird for an astronaut recovery.

HS-4 by now had become the designated astronaut recovery squadron. Apollo 8 was the first manned flight to orbit the moon and return. When the spacecraft hit the North Pacific Ocean, Helo 66 piloted by Donald S. Jones embarked on the recovery mission. Helo 66 remained involved as the recovery helicopter for the next 4 Apollo missions.

With the Navy adopting a 3 digit number for squadrons, Helo became 740 from 66 very briefly. The number 66 was painted again on Helo due to the popularity it was gaining in the public as Helicopter 66. With all the television footage of the astronauts getting down from the helicopter and several such photographs in the print media, the rotorcraft was nothing short of a celebrity. American space historian Dwayne Allen Day said of Helo 66, that it had attained the status of “one of the most famous, or at least most iconic, helicopters in history“.

Donald S. Jones again piloted Helicopter 66 for the recovery of the astronauts of Apollo 11, who became the first men to land on the moon. To commemorate this success, “Hail, Columbia” was inscribed on the underside of the helicopter. Helo spent all its active years with the HS-4 as the primary astronaut recovery chopper for Apollo 8, 10, 11, 12 and 13 and proudly carried all the five spacecraft symbols on either side of the nose. The modifications for SAR missions

Helo 66 underwent slight modifications to adjust to its new role, Search and Rescue (SAR) of astronauts. The SONAR equipment had to be removed in order to free up space in the cabin for the astronauts and the NASA surgeon. It also provided necessary free space required for any additional medical equipment that was needed for assessing and monitoring the vitals of the astronauts.

During the SAR of Apollo 10, the chopper was loaded with a sling made of half inch thick nylon line attached to the helicopter’s weapons shackle for an upright manoeuvre. This involved overturning of a spacecraft that landed at sea in an upside down position.

Just below the cabin door, a special greeting was inscribed on the belly of Helo 66, welcoming home the astronauts. As the Command Module call sign was Charlie Brown and that of the Lunar Module, Snoopy; the greeting was a big pair of Snoopy eyes with the words, “Hello Dere Charlie Brown” visible to the Apollo 10 astronauts as they looked up after a splashdown. There was a 35mm still camera and two 70mm motion picture cameras on a mount behind the starboard side. Another camera was pointed down so as to be able to click images of the recovery operation underway.

In 1970, during the SAR of Apollo 13, the cameras on the recovery chopper were capable of a live feed and a live television relay was conducted during the operation.

The last years of Helo 66

The helicopter’s hover became unstable with the sonar dome below the water’s surface which started pulling the helicopter into the water. The crew managed to escape as Helo 66 sank underwater. They were rescued by Coast Guard and taken to the San Diego Naval Hospital from where they were discharged in a few days except the pilot who had a ruptured spleen and three weeks later, succumbed to his injuries.

The artist Tom O’Hara was commissioned in 1969 to make a painting of Helicopter 66 that was a part of the NASA art initiative. The painting is on display at the National Air and Space Museum of the Smithsonian Institution in Washington, D.C.

The same year, German singer Manuela released a love song referred to as “Helicopter US Navy 66” which starts with the sounds of the helicopter’s engine and blades whirring. In the song, Manuela sings of being rescued from the sea by a man who comes in Helicopter 66. The song went on to become a huge success and was often heard in dance clubs in the 1970s.

In the early 1970s, Dinky Toys paid their tribute to Helicopter 66 by releasing an exact die-cast toy version of the helicopter, complete with a hoisting sling to lift a plastic command module.

Today the legacy of Helicopter 66 can be seen in the replicas of the legend painted in Helicopter 66 colours on display at the USS Hornet Museum, USS Midway Museum and the National Museum of Naval Aviation. 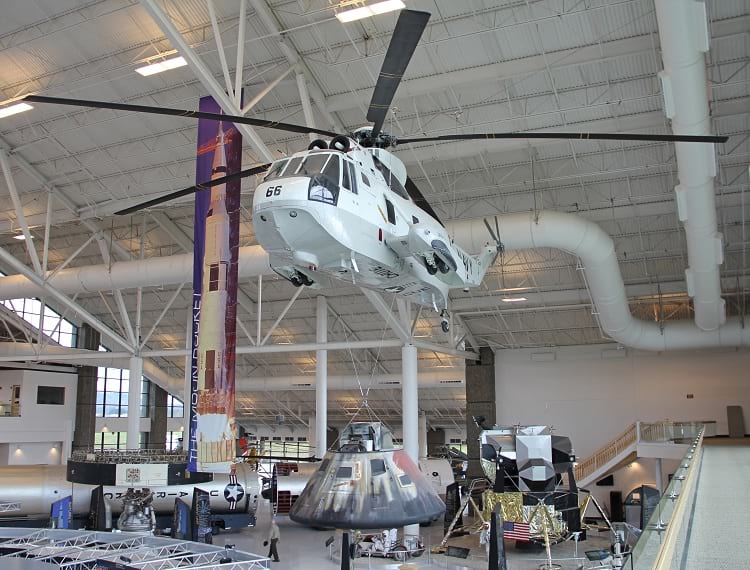 Enjoyed this article? Also, check out “Why Were the Apollo 11 Astronauts Quarantined after Returning from the Moon?“.