Sex in Space – Is It Possible? and Why It is Important 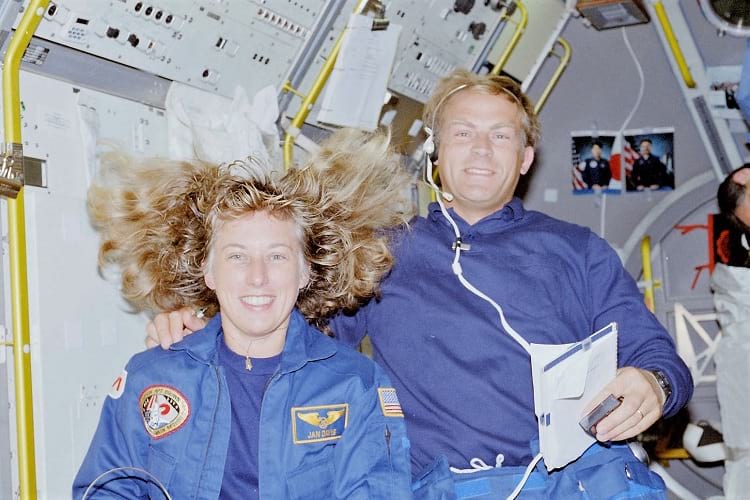 Astronaut Jan Davis and Mark Lee, the only married couple to have travelled together in outer space. (The U.S. National Archives)

Sex of course, needs no introduction. A fundamental building block of life and evolution as well as a popular past-time would be extreme understatements. It is inherent in the human genus and more and more everyday plays a large role in all aspects in the fabric of life – advertising, movies, and nightlife etc. For this reason, we assume that people are having sex everywhere: houses, hotels, colleges, beaches, farms, roller coasters, boats and hot-air balloons.  One would expect in spaceships and stations also, but it turns out that it’s not so easy to have Outer Space intercourse.

“Former and current astronauts don’t like to talk about space-shuttle sex, and NASA says that if it’s ever happened, the agency doesn’t know anything about it. (NASA has never conducted official experiments on animal reproduction in space, says a spokesman.)”

This was back in 2007 but explains the lack of practice or even consideration before that year. It is more and more becoming a necessary topic to discuss as plans to colonise other planets and space has entered the goals of the human race. NASA officially began preparatory missions in 2009 but presumably had feelers out way before then along with other organisations and personnel.

Many would agree, that NASA is simply reserved about making information like this public. For example scientific writer Pierre Kohler,

“The issue of sex in space is a serious one… The experiments carried out so far relate to missions planned for married couples on the future International Space Station, the successor to Mir. Scientists need to know how far sexual relations are possible without gravity.”

The problem with Sex in Space

The primary problem with intercourse in space arises from weightlessness and factors from Newton’s Third Law which means an easy process on Earth is much more difficult in space. For every reaction, there is an equal and opposite reaction but not when something is connected.

This is universal law so it remains the same anywhere in the universe. It means that if the couple remain attached they will not be able to exert force upon one another and unless there is another object to counter, their velocity cannot change. Along with this, anti-gravity prohibits any real movement, however slight. All our evolution has all taken place under Earth’s atmosphere and conditions, in space means a completely new environment for our bodies to process. Gravity has a hand in a number of our functions from the basic principles of cells and organs so we cannot just use a device which creates gravity. Beyond that, pregnancy and birth could cause problems in other environments so difficulty with conception initially may not be a bad thing – like a warning from nature. Scientists have already tried it with rats and while they were able to breed, the litter were unable to survive long.

Lack of gravity can cause a lot of problems if a person is expending too much energy, extreme perspiration and nausea can occur. Muscles and bones can become extremely brittle and risk injury with the slightest mishap or accident. Circulation changes also, a pulse rate which can swell your heart and slow down circulation.

Things we take for granted in 1G – our gravitational atmosphere. Human behaviour is greatly affected also, with astronauts reporting extreme changes in mood which could cause complications in highly charged emotional situations.

There has been nothing official from NASA and their counterparts but here are some examples of individual parties looking to complete the task. Multimillionaire astronaut Dennis Tito owns a foundation who announced a two-person crew would flyby Mars and back to Earth. The Inspiration Mars Foundation was set for a 501 day trip but it has yet to be completed. 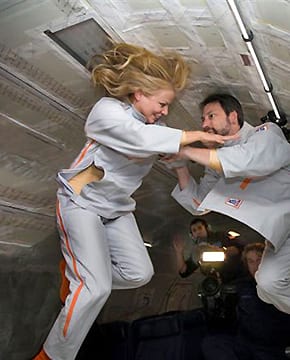 There have been creations to solve the problem including an invention called 2suit. A type of apparel designed by a famous astronaut and novelist Vanna Bonta which generated much publicity and discussion. A documentary described how a couple tested the suit in a zero-gravity airport yet even kissing proved a challenge and more time was reportedly needed.

With more and more talk about colonising other planets, sex in space is an important topic as it is the fundamental operation needed to do so. And reaching hospitable, goldilocks planets could take generations which is why it is not just sex, but sex in the confines of a space-saving spacecraft that has to be negotiated. It is an exciting experiment for the future in terms of the logistics. That is without taking into consideration whether it is something mankind should or should not do.

From a science fiction standpoint, it is a subject which has been covered many times over. From many male perspectives, there is one scenario which could be appealing. Apollo 11 astronaut Michael Collins wrote a tongue-in-cheek possibility in his autobiography. Time magazine posted it,

“Imagine a spacecraft of the future, with a crew of a thousand ladies, off for Alpha Centauri, with 2,000 breasts bobbing beautifully and quivering delightfully in response to every weightless movement … and I am the commander of the craft, and it is Saturday morning and time for inspection, naturally.”

[It should be noted that author Arthur.C Clarke informed the editor of Time that he was first to write this in his novel Rendezvous with Rama (1983)]

The human race has achieved so much that sex in space will without a doubt become a mainstay, it is just a question of when.

Recommended Read:
An Astronaut’s Guide to Life on Earth | By Chris Hadfield

Previous Article
Pink Lakes: Where Rose-Tinted Lakes Surrounded By Lush Greenery Are Truly a Sight to Behold
Next Article
Pamban Bridge: A Historic Indian Sea Bridge That Was Built on Modern Principles