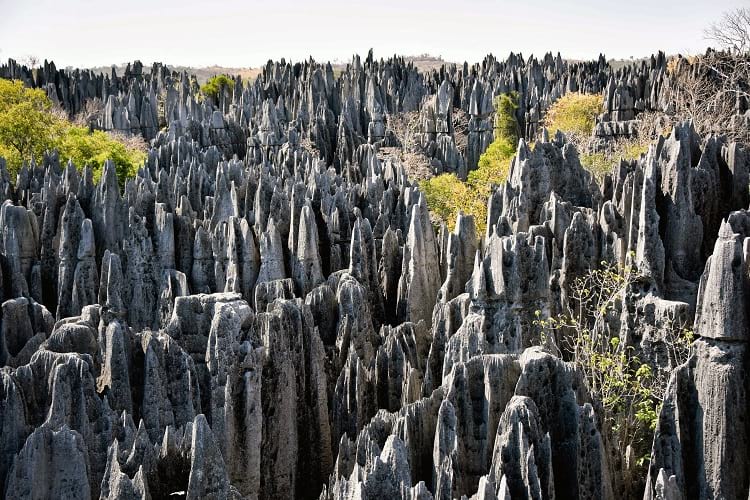 There is an interesting game of one-up-man-ship between man and nature. Man wants to win over nature forgetting he himself is a part of nature. Nature, on the other hand, is equally adamant and resolute in guarding her sovereignty. Titillated by harrow, Earth laughs with a harvest. Equally, ravaged by time and tide, Earth can bare her fangs, to protect her flora and fauna and her self. An example is Stone Forest in Madagascar, nature’s throwback to man’s burning of woods. `Come on! Burn this stone forest if you can’, says nature. Man is stumped, and badly at that.

Welcome to Tsingy de Bemaraha National Park Madagascar, a 666 square Kilometer area located in western Madagascar and a UNESCO World Heritage site. Former French overseas territory, and now a large island, about 500Km long off the coast of Mozambique, Madagascar is a biodiversity marvel. Ninety percent of the life forms found here can’t be seen at any other place on earth.

A safe haven for wildlife

When forest vegetation on this geographical area was razed down by man to grow rice, dislocated life forms, so it seems, found shelter in the Stone Forest. Tsingy de Barah sprung up as nature’s rebuttal to man’s abuse of natural resources.

Tsingy in Malagasy (the native language of Madagascar) means – (where) you can’t walk without shoes (protective gear) or ‘walking on tiptoes’. The moniker is a stark reality for any explorer or research scientist who has set his foot on this reserve can vouch for. Ragged multistoried rocks with razor sharp uneven surface, serrated limestone pillars shooting up to 100 meters in height, a mountainous terrain replete with sinkholes, fissures caves and spires are hallmarks of this National Park.

Winding, labyrinthine and spiky pathways in the bowels of forest are a nightmare for anyone out there to test his stamina and endurance in exploring the unknown and unchartered pathways. The park is extremely patronizing for the inmate plants, insects, birds and animals which may have perished but for the care and protection showered on them by Mother Nature, courtesy Tsingy de Bemaraha National Park. As man is clearly intimidated and overwhelmed, this area is sweet home to a wide diversity of life forms in high-density habitations. 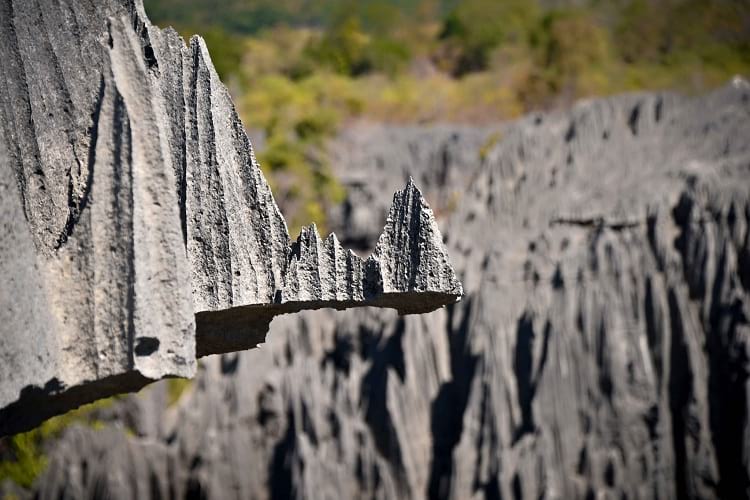 Limestone rocks in this part of Madagascar (4th largest island in the world) got invaded with the rising table of underground water, creating horizontal and longitudinal cuts in the deep interior of rock masses. A wet-dry tropical climate tempered this change, causing, in course of time, formation of deep fissures, caves, caverns, and pointed limestone projections shooting high into the skyline.

If Earth had a set of teeth, it must be these limestone needles radiating from a compact group of mountains (Massif). This geomorphic fencing protects many rare and endangered species of plants and animals living and thriving here. Maze of prickly pathways, steep heights, uncanny cliffs, slopes and the eerie feel of the area is enough to send a shiver down the spine of any first time visitor.

But for the guided tour of the area presently in vogue, it would be a no entry zone for humans; a fitting closure for mankind that destroyed 90% of the natural habitat of the region for pecuniary gains. Life forms uprooted from wild consequent upon the annihilation of forests for agriculture and logging could live and flourish in these multistoried rock formations – looking like a chain of cathedrals carved by nature.

This range of limestone jigsaw is home to a population of organisms 85% of which are just not found anywhere else in the world, and 47% are exclusive only to a particular area of the massif. Vegetation ranging from deciduous dry forest to vast grasslands, bushes and wooden climbers abound in myriad locations of Tsingy mountain range.

As for animals, their diversity and uniqueness is mindboggling. Close to 25000 species, many of these ‘endangered’, frolic and bloom in abominable innards of this stone forest. At the very top, we find 11 species of lemur, jumping from one calcareous pinnacle to another. A rare mongoose-like mammal, falanouc, a ring-tailed mongoose and myriad bats inhabit their specific zones in this magical land of Indian Ocean.

Another variant mongoose, Fossa, measures 6 feet from tail to nose, weighs 12 KG and looks more like a cat than a mongoose. It scurries through foliage using its tail as balance pole. Placed in the red list of threatened species by IUCN, stone forest is one and the only abode on earth for this mongoose with looks of a cat. Comet moth or Madagascan moon moth is an astonishing creature with a wingspan of 20 cm. It is one among the largest moths world over. Panther chameleon can change colour to a range and degree which no other lizard worldwide can match. Satanic leaf-tailed gecko, the wonder snake, is a camouflage icon. It blends so well with its environment that predators are easily conned. Brightly colored tomato frogs, nocturnal primates aye-aye, the bird Madagascar fody, Madagascar long-eared owl, lowland streaked tenrec – a hedgehog-like mammal with long pointed snout, painted mantella – the  frog with green, black, yellow or orange colored skin; are some unique creatures living in the expanse of park’s largely unexplored hostile environment. Apart from anthropological reasons, these organisms owe their distinctive characters to tectonic shifts because of which they evolved in relative isolation with rest of the world. Madagascar was part of Indian peninsula 88 million years ago when it broke away from Madagascar-Antartica-India landmass. Earlier to that, 200 million years ago, the region was limestone seabed which would pop out as the sea water receded, making it a terrestrial bed. Subsequently, it morphed into mountains of cathedral limestones, the natural reserve now called Tinsgy de Bemaraha.

It is located in Antsalova district of central-west Madagascar. Home to 80,000 hectares of dense, dry forest, the region is an ultimate marvel of karst (limestone) system. Its biological uniqueness has given it the epithet of `the eighth continent’.

Tsingy is a perfect example of how nature can go malignant following consistent exploitation by human hands and survive worst of geomorphologic upheavals. Realization world over to leave nature to herself hasn’t come a day too soon. Yet, late is better than never.

Enjoyed this article? Also, check out “The Jewel of Manipur: The Loktak Lake is the Only Floating Lake in the World“.