Ham – The Chimpanzee that Paved Way for Launch of Manned Spacecrafts 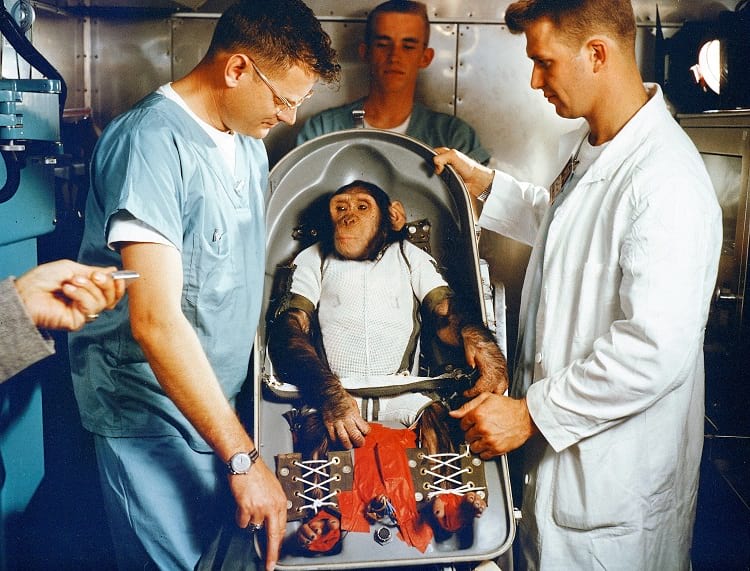 Ham – the chimpanzee in his biopack couch preparing for the sub-orbital spaceflight. (NASA)

The cold war between America and the Soviet Union (present-day Russia) wasn’t limited to just sea and territorial region. It extended well into space. In the Space Race, Russia took the lead by launching an artificial satellite Sputnik-1 into earth’s orbit in 1957. Later the same year Sputnik-2 was launched with Laika the canine cosmonaut who became the first animal to go into orbit. America in the meanwhile sent fruit flies (1947) and monkey-mice team (1951) into space. Life could survive in space; this was proved beyond doubt. But could life also perform a designated task in space? America sought an answer by sending Ham – the chimpanzee, into space and the answer was ‘yes’. The answer came full 10 weeks ahead of Soviet Astronaut Yuri Gagarin orbiting around the earth on 12th April 1961.

Ham – the chimpanzee was procured and trained for the space mission

Born in African forests of French Cameroons in 1957, Ham was procured and purchased for Holloman Air Force Base, New Mexico, America. It was one in a team of 40 chimpanzees chosen for training at the ‘School for Space Chimps’. The training was a part of NASA’s Project Mercury, which aimed at sending a human being in the space. On Jan 2, 1961, six from these 40 were shortlisted and shifted to Cape Canaveral, Florida for the last round of preparations. They were divided into 2 groups of 3 each, lest illness of anyone spread the infection to all six. The mission would help scientist understand if the human body could perform well at high speed and zero-gravity conditions of space travel.

Trained for responding to coloured light in a preplanned manner

The training schedule established a healthy rapport between the primates and their handlers. The health of chimps was thoroughly monitored. Ham, initially called No. 65, was supervised by a Neuroscientist. Ham with his trainer at Cape Canaveral, Florida. (NASA on The Commons / Flickr)

The training was about testing a directed response to 3 lights – red, white and blue, kept before the chimps. Each light had a lever below it. The red light was continuously on, and its lever wasn’t supposed to be pulled. The white light was off and would flicker only when the related lever was pulled. The chimps were trained to switch on the white light once every 20 seconds. The blue light shone erratically for 5 seconds during which time the chimps must pull the lever related to blue light. Primates performing as per the directions were rewarded with food bite and water. Derelicts got punished with electric shock in the sole of their feet. Primates were also subjected to simulated microgravity and g-forces to acclimatize them with the space environment. A technician displaying all the equipment of Ham the Astrochimp in preparation of the launch. (NASA on The Commons / Flickr)

Mercury Redstone 2 rocket was ready for take-off on 31st January 1961. Which primate would go on a mission was decided on 30th. The decision went in favour of the flamboyant Ham. Another primate (Minnie) was selected as standby. Interestingly, the name Ham was made public only after the successful return of the primate on earth. Before that, No. 65 was made his official name, and for a good reason. The officials felt that if a formal name was announced for the chimpanzee, it could add to bad publicity in case the primate couldn’t return safely from the space. Ham – the chimpanzee had a pet name too, ‘Chop Chop Chang’; that’s how the handlers addressed Ham during his training period.

Preparing for takeoff was elaborately planned 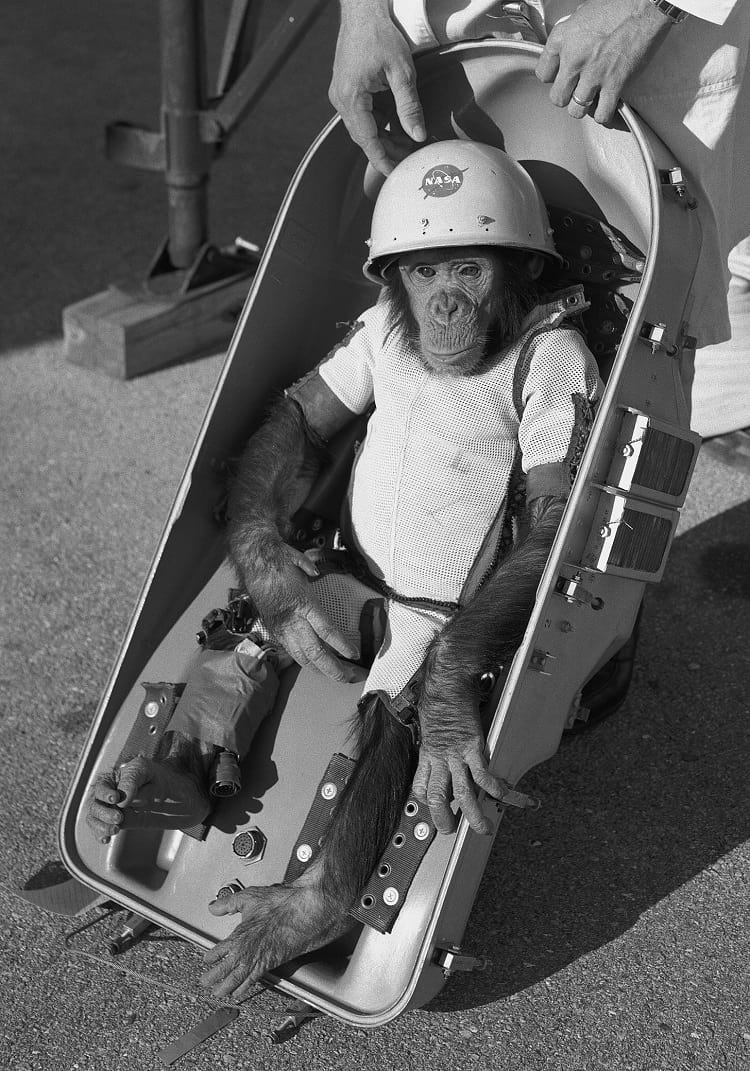 Ham in his spacesuit sitting inside MR-2 capsule prior to its test flight. (NASA)

Nineteen hours before takeoff, the selected primates were given a special diet and placed in their pressurized cabins with biosensors attached to their bodies. Seven and a half hours before takeoff, a chain of pre-launch examinations were conducted. Four hours before the journey, the two were dressed up in spacesuits, positioned in their couches, and taken to a transfer van. In the transfer van, they were provided with environmental control equipment. Two and a half hours before launch, only Ham was boarded into an elevator and ushered into the nosecone of the spacecraft. It would be a sub-orbital spaceflight as spacecraft wouldn’t orbit or circle the earth.

In spite of several problems, the mission was a success

Problems for the mission began right from the start. There was a dip in air pressure, but thanks to the buffer arrangement, Ham remained safe. A technical snag made spacecraft overshoot planned altitude of 115 miles and cover 157 miles. Speed too went on the excessive side. Against the planned speed of 44000 mph, the spacecraft reached a speed of 5,857 mph. Consequently, it landed on earth 422 miles away from the launch site, as against the planned distance of 290 miles. Naturally, salvage operations after the splashdown in the Atlantic Ocean got delayed. However, help reached in the nick of time and Ham escaped death-by-drowning. 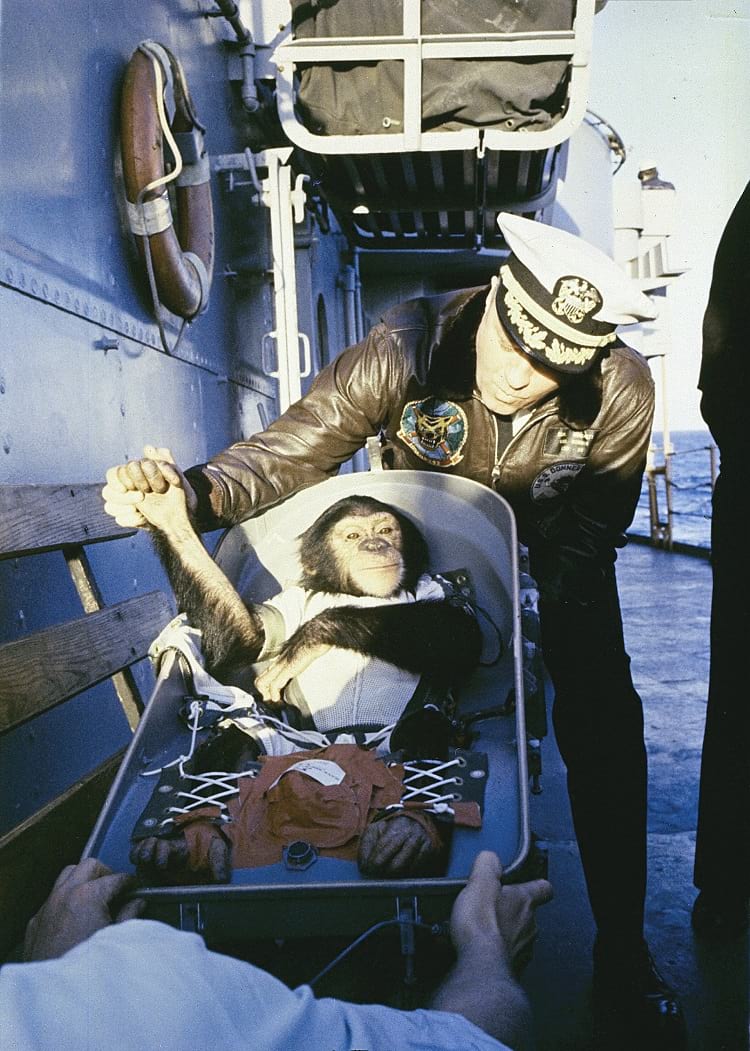 Ham being greeted by the commander of the ship after his recovery. (NASA on The Commons / Flickr)

On return to earth, Ham was in high spirits and accepted apple given by the commander of the recovery ship. He also shook hands with the members of the receiving team. But for a little limp in legs, he was in a good physical shape. Flashing of cameras, and the commotion of the Press reporters did irritate him, and it took quite some time to cool him down. Ham being rewarded with an apple after his successful spaceflight. (NASA)

Ham’s performance in space was on expected lines

Ham’s perform in the total 17 minutes of his journey in space was satisfactory. His reflexes to lights and levers were only a little slower in the space than on earth. Enough hint to the scientific community to go ahead with the manned spacecraft. As mentioned earlier, it was only after the success of the space mission that the name Ham was made public. Ham, the Astrochimp. Ham is the acronym for Holloman Aerospace Medical Center, the laboratory that trained the iconic primate. Coincidently, the-then lab commander was Lieutenant Colonel Hamilton ‘Ha’’ Blackshear.

In life, as well as death, Ham remained a subject of keen scientific exploration

Ham shot to instant fame and was widely covered in media. Till 1980, he lived at Smithsonian’s National Zoo at Washington DC. Then he was shifted to the North Carolina Zoological Park in Asheboro where he died in 1983. Skeleton from Ham – the chimpanzee’s dead body was removed and sent to the Armed Forces Institute of Pathology for studies and investigations. Other remains of the body were buried in Alamogordo, New Mexico, at the International Space Hall of Fame.

Was Ham the chimp subjected to cruelty?

The story doesn’t end here. There is a flip side to it, if a noted Primatologist, Dr. Jane Goodall is to be believed; she perused the photographs of Ham – the chimpanzee taken during 17 minutes of his space flight and after recovery of his capsule from the Atlantic Ocean. The photographs, according to her, were shockingly horrendous. Terror was writ large on the primate’s face. He lived alone in captivity for 20 years after travelling in space and died prematurely at the age of 25.

Goodall criticized NASA’s portrayal of Ham as a hero. Chimp’s pictures given in the media were selective and edited. The animal did go through bouts of extreme pain and distress but such pictures were kept away from the public. She also took exception to remove and exhibit the primate’s skeleton. That, she said, amounted to death-without-dignity.

The use of animals in experiments for the advancement of technology and human welfare will remain a grey area of human endeavour. Nevertheless, the contribution of Ham, the Astrochimp, will remain a milestone and a turning point in the history of Space Science.

Enjoyed this article? Also, check out “Laika the Canine Cosmonaut – From the Streets to the Stars“. 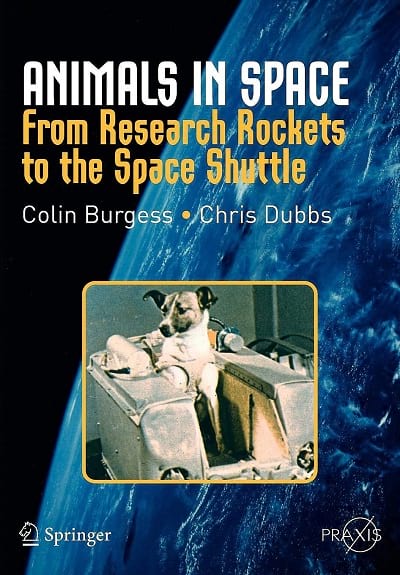