Bunkers near the residential area are a common sight in Albania. (Edal Anton Lefterov / Wikimedia Commons)

The concrete bunkers of Albania are an omnipresent entity that can be located all over the country – in the middle of the streets, in the middle of fields and even on people’s lawns. These bunkers or bunkerët were largely constructed between 1960 to 1980. At the time, Albania was ruled by a communist government which was headed by the left-wing ideologue, Enver Hoxha. By 1983, around 175,000 to some 750,000 bunkers had been constructed all over the country. Hoxha’s program of bunkerisation involved constructing bunkers in every nook and cranny of the country of Albania. Bunkers were constructed deep in the Albanian countryside and also right on the pavement of city streets. A large bunker in the countryside. (David Stanley / Flickr) 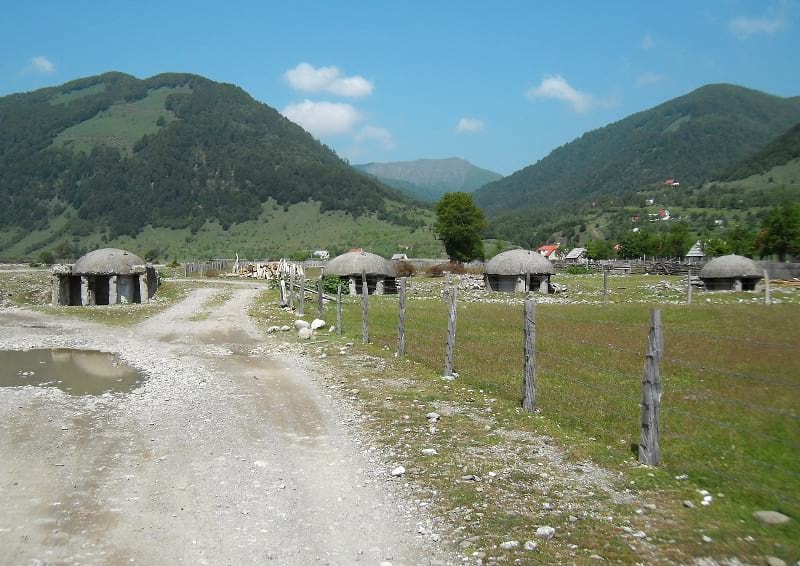 Although so many bunkers were constructed during Hoxha’s regime, none of them were used for their intended purpose. On the contrary, the process of bunkerisation was an unnecessary drain on the country’s already dwindling economic resources. Constructing the useless bunkers diverted funds away from more pressing needs like Albania’s housing problem and the pitiable condition of Albanian roads. After the collapse of communism in 1990, most of the bunkers were abandoned and now stand derelict and decaying. However, some are being put to good use as animal shelters, shelters for the homeless, cafés and residential projects.

Led by Hoxha, Albania withdrew from the Soviet Union after Nikita Khrushchev started the process of De-Stalinization, which was known as the Khrushchev Thaw. The Khrushchev Thaw was a period of the early 1950s where the Soviet Union relaxed censorship, repression and released political prisoners. Enver Hoxha was a hardline Stalinist and his brand of communism was influenced by elements of Maoism as well. In 1968, Hoxha also withdrew Albania from the Warsaw Pact after the Warsaw Pact countries invaded Czechoslovakia. Albania also cut off cordial relations with China after US President Nixon visited China in 1972. Albania was also perpetually in a state of war with Greece. One of the reasons for this hostility was that Greece was a member nation of the North Atlantic Treaty Organisation (NATO) established in 1949. Hoxha was also incredibly critical and hostile towards the communist government established in Yugoslavia by the moderate dictator Josef Broz Tito. As Hoxha was a hardline Stalinist, he accused Tito of maintaining a chauvinistic attitude towards the Party and the State.

Hoxha was also growing increasingly paranoid of Albania being invaded by Yugoslavia, the Warsaw Pact countries or NATO. According to Hoxha, Yugoslavia wanted to invade Albania and make it their 7th province. Also, Hoxha talked about the persecution and imprisonment of ethnic Albanians living in Kosovo. Hoxha introduced a new constitution in 1976 that increased the Labour Party’s stronghold upon the country, the military and also severely limited the ownership of private property. Under Hoxha’s regime, the country sank into a situation marked by paranoia, isolation and economic stagnation.

Starting in 1967, the Hoxha regime began the process of bunkerisation or bunkerizimi. Hundreds of thousands of bunkers were constructed all over the country. They were built in virtually every location – beaches, mountains, vineyards, pastures, villages, towns, city thoroughfares and even on the manicured lawns of Albania’s best hotel. As discussed earlier, Hoxha was incredibly paranoid about Albania fending off a two-front invasion against Yugoslavia, the Warsaw Pact countries and NATO which would involve a simultaneous attack by eleven enemy airborne divisions. Hoxha implored his citizens to be increasingly vigilant and also took drastic steps so that citizens could be militarised effectively. A man resting against a typical bunker on the street of Albania. (Jeroenvrp / Wikimedia Commons) 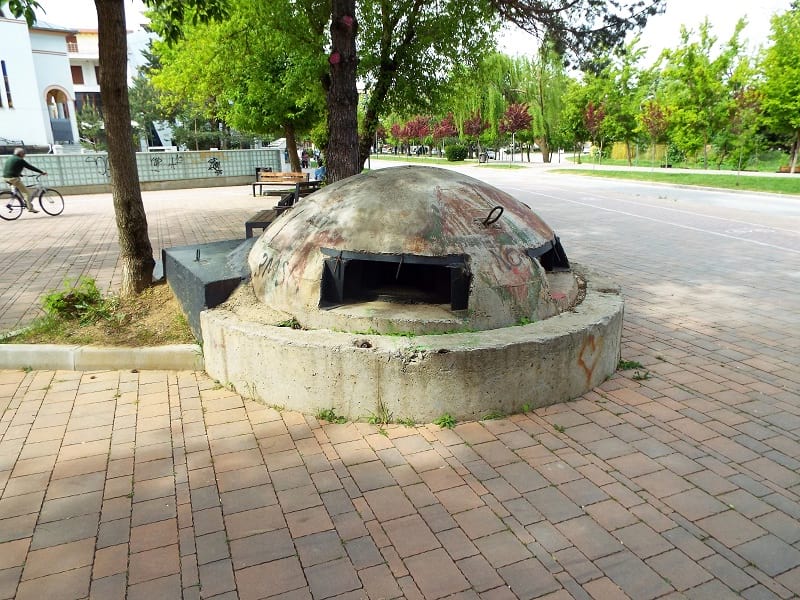 Hoxha’s role during the Albanian Resistance during World War II now took mythological proportions and was used as a rationale for the excessive militarisation and bunkerisation. The Albanian Resistance’s war strategy was guerrilla warfare based in the mountains where soldiers would stay hidden and raid vulnerable areas in the plains. To protect Albania’s sovereignty, the main intention of the bunkers was to provide defensive positions all over the country where Albanian soldiers could take refuge. The small bunkers were constructed in such a way that they would remain in sight of a much larger command bunker, which would be permanently staffed. Communications would be achieved by radio and visual signals.

Out of the total population of 3 million citizens, Hoxha’s regime effectively militarised 800,000 of them. From a very young age, Albanians were fed propaganda and were taught to be vigilant. From the age of 12, citizens were trained in how to station themselves in the nearest bunkers to fight invading soldiers. Civil defence drills were held regularly – at least twice every month, which would last up to three days.

Construction of the bunkers in Albania

The bunkers were made of concrete, iron and steel and varied in size. There were the smallest bunkers with gun slits that could only fit one or two persons. On the other hand, large underground nuclear bomb shelters were also constructed that would be used by the Party Leadership and bureaucrats.

The most common bunker type is the smallest version, known as the Qender Zjarri or QZ bunkers. It is a small concrete dome set into the ground with a spherical bottom that extends downwards. The components of the QZ bunkers were prefabricated and were then assembled at the designated location. QZ bunkers were generally constructed in groups of 3 and placed in strategic positions all over the Albanian coast, linked to each other by a concrete tunnel. The city of Tirana was heavily guarded, with thousands of bunkers radiating out in fifty concentric circles around the entire city. 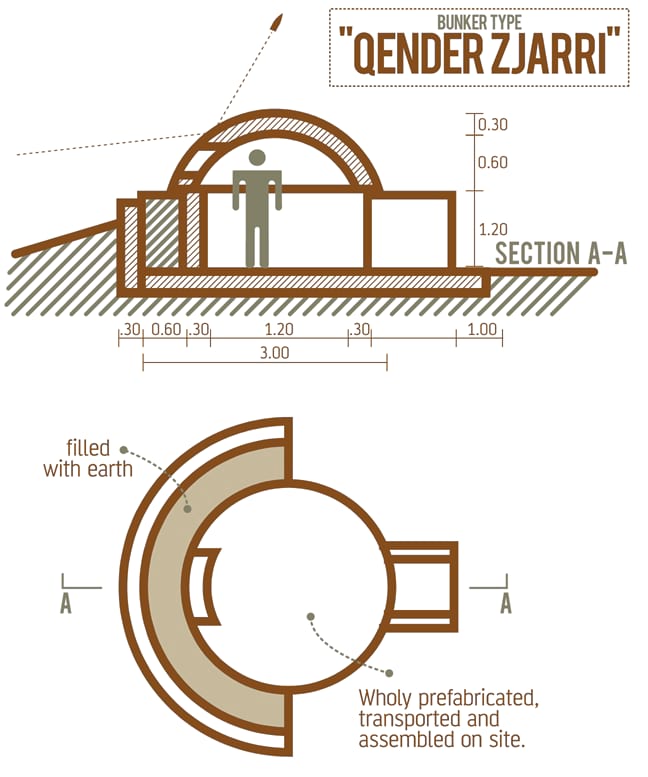 The command-and-control bunkers were known as Pike Zjarri or PZ bunkers. These were much larger and heavier than QZ bunkers, weighing 350-400 tons. These were also prefabricated and assembled on-site. The largest among the PZ bunkers had a diameter of 8 metres. 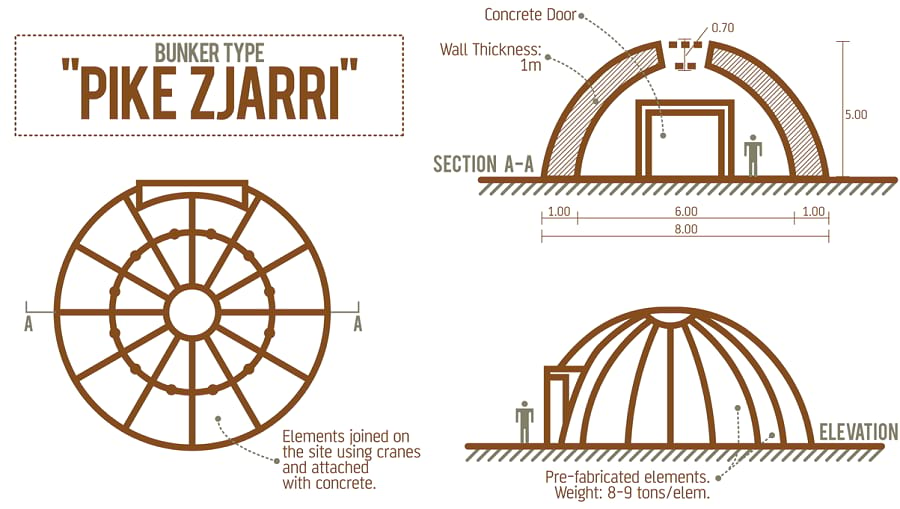 A PZ bunker converted into a home by a poor family, 1994. (Albinfo / Wikimedia Commons) 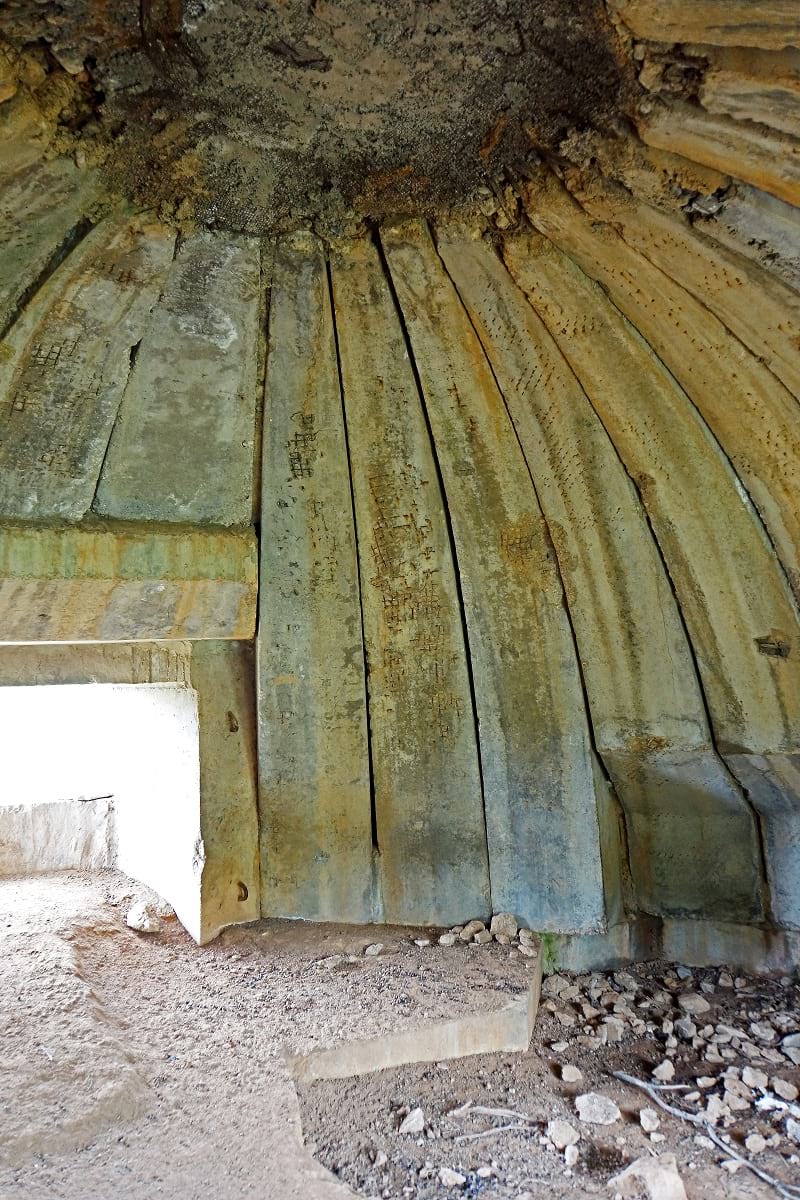 The interior of the PZ bunker. (Dennis Jarvis / Flickr)

Special bunkers were also constructed that were nuclear bomb-proof and were designed to protect Party members and upper-level bureaucrats in the event of an invasion. Near the capital, a 2-mile network of secret tunnels and bunkers was constructed to protect the politicians and the members of the Sigurimi (secret state police).

The process of bunkerisation was incredibly expensive and put a huge dent in Albania’s already weak economy. The country was just recovering from the massive damage it incurred during the Second World War. Hoxha’s paranoia badly affected the lives of 3 million Albanians. Isolation, fear, oppression and paranoia were the ruling tenets during Hoxha’s oppressive rule of forty years. When General Beqir Balluku, the Defence Minister, publicly criticized the bunkerisation program, Hoxha had him arrested, convicted and executed. In present-day Albania, the bunkers are used as pizza ovens, solar heaters, beehives and cafés.

Enjoyed this article? Also, check out “Prora: Hitler’s Colossal Resort by the Beach That Never Served Its Purpose“. 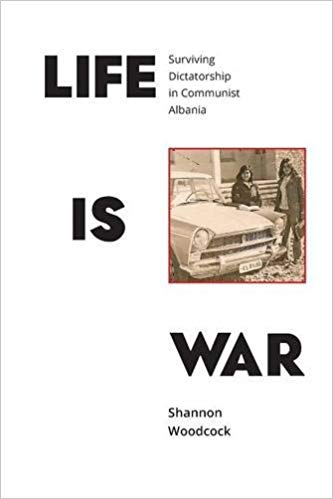