Humanzee: Was Oliver the Chimp a Missing Link Between Humans and Apes? 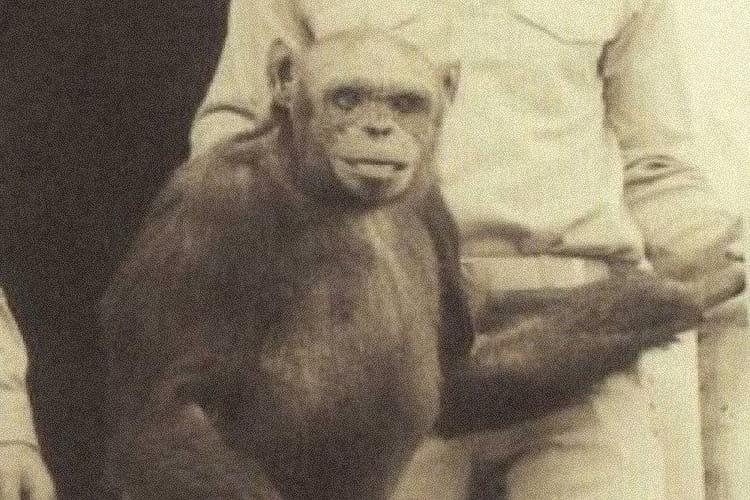 Researchers, over the years, have been on the lookout for the link between humans and apes. When Oliver appeared in the public eye, they publicized him as exactly that—a humanzee—a hybrid between a human and a chimpanzee. Were they correct though, or was it a hoax all along?

Oliver was born in 1957 in the Congo region where he was abducted by animal smugglers. They took him to the United States and, here, in 1970 two trainers, Frank and Janet Berger, took him. They brought him up as a human and he lived with them until he was 16 years old.

The Bergers noticed early on that Oliver differed from the other chimpanzees they had, with whom, incidentally, he didn’t get along well; he showed a distinct preference for human companionship. He had a small head and features that were more human-like than chimpanzee-like. Further, he liked to walk upright on two legs, rather than bent over and using the knuckles of his hands as the other chimpanzees did. The Bergers also found him to be remarkably intelligent and easier to train. He even did chores. 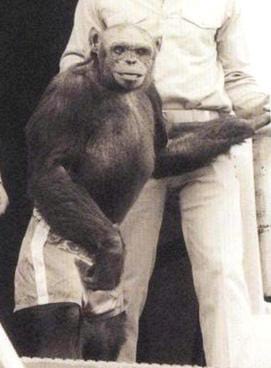 As he became sexually mature, however, his behaviour became problematic. He took a fancy to Janet Berger as a mate and began attempting to mate with her. As he was very strong, the situation could have turned dangerous. The Bergers, therefore, decided that he had to go, and sold him to New York attorney Michael Miller.

Miller hoped to make money by exhibiting Oliver and took him on the road to many places, including Japan. Oliver proved to be a hit there. According to newspaper accounts, over 26 million Japanese came to see him.

In 1977, unable to keep him for various reasons, Michael Miller sold Oliver to a theme park owner named Ralph Hefler. He exhibited Oliver in his theme park, the Enchanted Village, and, after that shut down later that year, he took him to his new venture, the Gentle Jungle. While the location of this new theme park changed a few times, Oliver remained a constant feature in it. After it closed in 1982, Oliver went to Ken Decroo’s Wild Animal Training Center in Riverside, California. He remained here until 1985 until an animal trainer, Bill Rivers bought him.

When Bill Rivers found that Oliver did not get along well with his other chimpanzees, he sold him in 1989. Oliver’s new owner was the Buckshire Corporation in Pennsylvania. It was in the business of leasing out animals to research laboratories for scientific and cosmetic testing.

Fortunately for Oliver, because of his human-like qualities, they spared him the horrors of being used in experiments. Although, when they examined him at the facility, the animal caretakers noticed scars and signs that some of his previous owners may have abused him. Oliver didn’t receive much kindness at the Buckshire Corporation either. The company kept him in a small cage where he could not move about freely. He remained there for nine years, and as a result, developed muscular atrophy. The condition made his limbs tremble when he walked.

Animal activists noticed his pitiful condition, and the animal sanctuary, Primarily Primates, petitioned Sharon Hursh, the president of the Buckshire Corporation, in 1996, to do something about him. Hursh ordered Oliver to be shifted to Buckshire’s retirement colony, where 13 chimpanzees already lived.

As Oliver’s trainers found, his behaviour was like a civilized human. He was not aggressive and was, in fact, enthusiastic about helping with chores. If there was a need to transport hay and straw from stalls, he would be ready to move the heavy load in a wheelbarrow. He acquired human traits of enjoying a cup of coffee and even knew how to mix his own whiskey. He often sipped his drink while watching television.

In 1998, Oliver moved to the Primarily Primate sanctuary in Bexar County, Texas. He lived here in a spacious, open-air cage.

After the merger of Friends of Animals and Primarily Primate, Oliver continued to live in the facility in the company of a gentle female chimpanzee named Raisin. His years in the research lab had taken their toll, and, half-blind and arthritic as he was now, he was unable to put up with the company of younger, rumbustious chimpanzees. His caretakers allowed him to lead an easy-going existence, with recreational activities such as watermelon smashing parties and painting sessions. They put up photos and news articles online to update his fans about his activities.

On 2 June 2012, when he was 55 years old, the caretakers found Oliver dead beside Raisin. They cremated him and spread his ashes on the sanctuary grounds.

Was Oliver Really a Humanzee?

Some of Oliver’s exhibitors claimed that he had 47 chromosomes. Chimpanzees have 48 chromosomes, and humans have 46 chromosomes. So, that proved that Oliver was a hybrid.

Towards the end of his life, while he was at the Buckshire Corporation, a geneticist from the University of Chicago tested Oliver’s DNA. And published the findings of this genetic testing in the American Journal of Physical Anthropology and finally put to rest the hybrid rumour. Oliver, it turned out, had 48 chromosomes like any other chimpanzee. Furthermore, his mitochondrial DNA matched that of the chimpanzee subspecies that lived in Central Africa, and his ‘human-like features’ were discovered to be common in those chimpanzees as well.

Although, in the end, Oliver didn’t turn out to be a humanzee, his capacity to think and his human-like actions shed an interesting light on animal behaviour.

Previous Article
Newly Released “From Oberoi to Oyo” – A Close Look into the Revolution of the Indian Hospitality Industry
Next Article
Kintsukuroi: The Japanese Art of Fixing Pottery Reflects a Much Deeper Philosophy