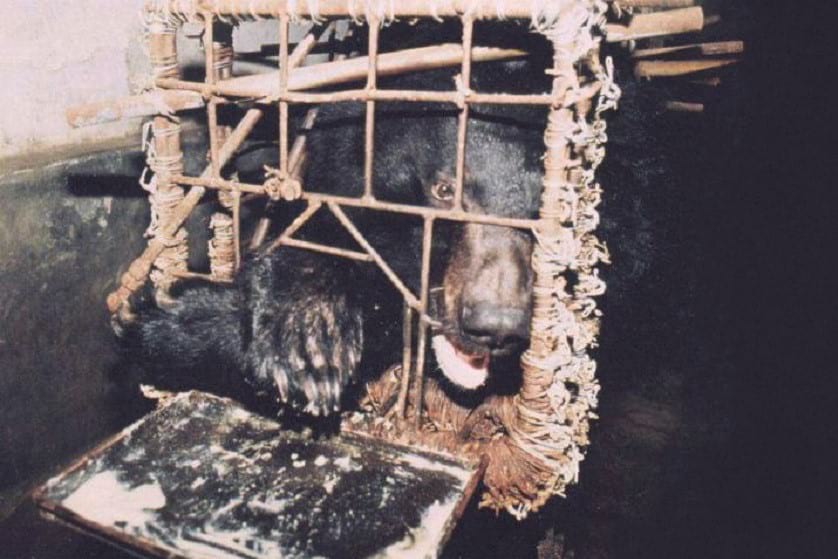 Bear bile farming: A bear named Elizabeth kept in a small cramped cage so that her bile can be extracted. (Photo by the Asian Animal Protection Network in Huizhou Farm, Vietnam)

Chinese medicine practitioners who follow traditional methods use a digestive fluid called bile, secreted from the liver of a bear. The harvest is usually taken from ‘bile bears’, sometimes known as battery bears. A whopping 12,000 bears are subject to bile farming in South Korea, Laos, Myanmar, China and Vietnam. 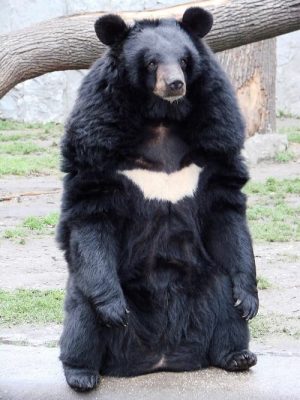 UDCA or ursodiol, a secondary acid and metabolic by-product of intestinal bacteria are found in bears- mainly Asiatic black bear, Sun Bear and Brown Bear, although other species are also used. The Giant Panda, also of the bear family, is not used for bile farming since it does not produce UDCA.

The Asiatic Black Bear and the Brown Bear have been listed in the “Red List of Threatened Animals” by the International Union of Conservation for Nature, due to the effect of bile farming on their population. Although hunting was prevalent earlier, it has since been cut down. Factory farming has been adopted since hunting was banned in the 1980s.

Chinese medicine practitioners were the first to use bile as a medicinal product, and its first-ever documented use was in Tang Ban Cao of the Tang dynasty. There are several techniques employed in bile extraction which are all surgical procedures. According to research conducted by Humane Society of United States, the bile produced by a single bear is about 10-20 ml, twice a day.

Although WHO has confirmed there’s no cure for COVID-19, the Chinese government has suggested the use of Tan Re Qing injection—on a list published March 4 by China’s National Health Commission, reports National Geographic. Tan Re Qing contains bear bile composed of high levels of ursodiol, that is believed to pacify and alleviate the symptoms of the novel coronavirus disease.

How is bile farming conducted? – methods of extraction

This is a technique that involves locating the gallbladder through ultrasound imagery. After this, the organ is pierced and the bile is taken out.

Permanent implantation is a technique in which a tube is surgically inserted into the gall bladder via the abdomen. The tube stays there till the time the bear is subjected to bile farming- which may even be for up to 20 years.

This process involves the insertion of a steel or perspex catheter into the gall bladder of the bear. The catheter lies under the skin from the abdomen to the hip, and promotes safety for the person who extracts the bile as it is located at a safe distance from the bear’s head.

The full-jacket method employs the use of a catheter as well. However, in this case, the catheter is permanently inserted into the animal, and the bile is collected in a plastic bag which is in a metal box worn by the bear. This has been considered one of the most inhumane methods by researchers who visited the bear farms.

For the free drip method, a hole is surgically made in the bear’s gall bladder, and the product directly drips out from the organ. This is not by any means a safe method for extracting bear bile, as it leaves the wound open for infection putting the animal’s life at risk.

Finally, the now-banned method for bear bile extraction involves the killing of the bear to directly extract the bile from the bear’s gall bladder.

Bears are subject to bile extraction right from the age of three, and spans for a duration of five to ten years. An average bear provides 2.2kg of bile over 5 years. While in captivity for bile farming, these bears are kept in cages that are often so small in size that they cannot stand up to their full height nor move back and forth. In other cases, they are kept in crush cages with practically no space at the sides, these cages are used to restrain the bear and hold them steady for bile extraction. Apart from these horrific procedures, bears are also subjected to declawing and removal of their hind teeth so that they cannot harm themselves or mutilate their body parts in any way. These precautions help to avoid any reduction in the quality of the bile product obtained from the bears.

Meat, fur, claws and even bear paws, apart from the bear bile, are a part of the huge industry that involves both legal and illegal trade. According to research conducted in 2015, Malaysia had a majority of medicinal products that contained bear bile. In China, only 7600 bears are officially accounted for in the process of bile farming, but according to the amount of produce that is discovered Chinese officials claim that it is equivalent to the product obtained by the slaughter of 10,000 bears.

In the United States, some parks had bear carcasses lying around which indicated poaching. Later it was discovered that the wild bears were being hunted for bile and a smuggling operation was being conducted by a large organization which led to the death of an approximate of 40,000 bears per year. In Virginia, 52 people were held responsible and were taken into custody by officials for the possession of 300 gall bladders. Raw bile, bile pills and powder are among the most popular products that are a part of the bile farming industry. As astounding as it may seem, the products extracted and sold in the market generates a whopping $2 billion in revenue in a year. 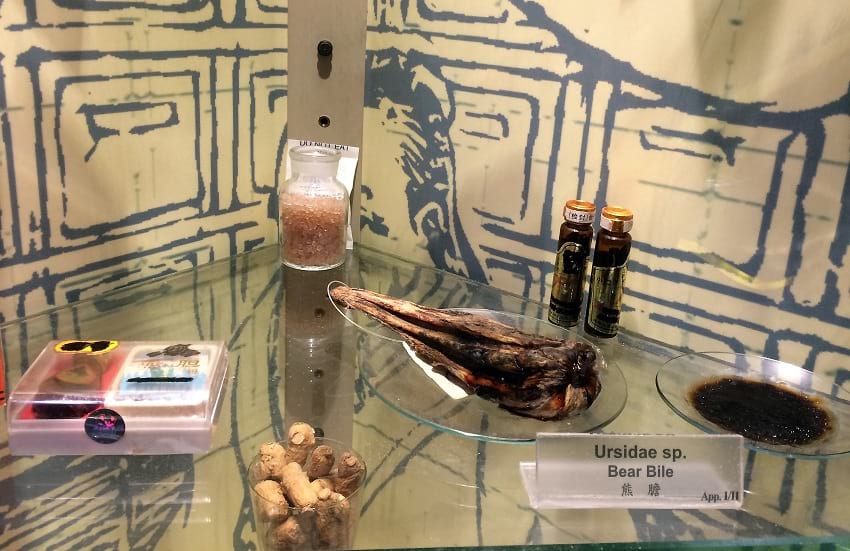 Due to the extensive bile farming activities and poaching, among other illegal activities, the number of bears in the world has drastically deteriorated. In 1994, the Chinese government imposed a number of rules to avoid cruelty in bile farming. They issued a proclamation stating that no external object was to be inserted into the body of a bear. Only bears that met certain criteria were to be used. The criteria set was that the bear should be at least 3 years of age and heavier than 100 kg. It was enforced as a “Technical Code for raising Black Bears” with utmost hygiene and care.

In South Korea, bear farming was declared illegal in the year 1992. However, there was no rule on the killing of bears over the age of ten. Even the Vietnamese government declared bile farming illegal in 2005. Despite the enforcement of such a law, the practice is still prevalent and bear farms continued their work illegally. Bear sanctuaries were opened both in Vietnam and China where over 500 bears were rescued by a charitable organization called Animals Asia.

Enjoyed this article? Also, check out “Tiger Farms: Where a Shady ‘Tiger Conservation Business’ Puts the Entire Feline Population at a Greater Risk“.

Previous Article
Sixteen Stormy Days- The Story of the First Amendment to the Constitution of India by Tripurdaman Singh
Next Article
Dr. William Chester Minor: A Learned Lexicographer or a Meritorious Madman?