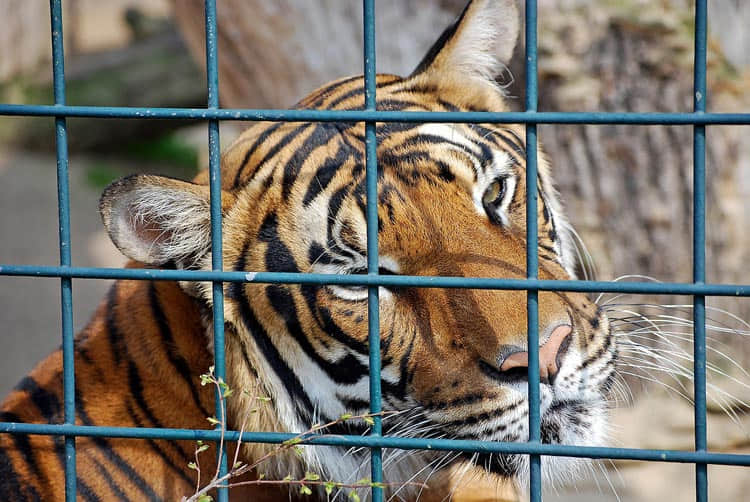 There is a natural order to this world that we have been hell bent on destroying. Humans take pride in their ability to be able to change the course of history and the shape of our planet. We, as a species have taken over this planet and it won’t be totally false to say that most other species survive here at our mercy. Though, we are not doing a very good job as the custodians of planet Earth.

The population of wild tigers in China went down drastically during the 1980s thanks to systematic poaching to fulfil the demands of the traditional medicine market. The Chinese government saw a business opportunity with huge guaranteed profits and hence funded large-scale farms to breed and slaughter tigers for their body parts. In 1986, 8 tigers from American zoos were brought to China under the pretext of starting a program to breed tigers for the conservation of the endangered species. This has since turned into one of the dirtiest businesses in the world, the commercial tiger farming.

A video of some tigers chasing a drone around one such tiger farm in China went viral last year giving people a better look at China’s commercial tiger farms. It has become very clear that they are not running these farms with the intention of conserving the endangered species. Even though they formally agreed to ban any trade of tiger body parts after they had signed the international treaty at the Convention on International Trade in Endangered Species of Flora and Fauna (CITES) in 1981. It was their own State Forestry Administration (SFA) that approved the opening of the first tiger farm.

The main purpose of these tiger farms is breeding tigers for profit, primarily, to feed the Chinese traditional medicine market which relies heavily on tiger bones. These farms supply not only the tiger bones but hides, claws and, teeth to anyone who is willing to spend a good amount of money.

The wildlife tracking NGO traffic revealed the sale of tiger bone at US$257 for 500ml. On the other hand, the International Fund for Animal Welfare (IFAW) recovered 1.2 million litres from one farm that estimates to US $617M. Tiger meat was priced at US$100 per dish and teeth at US$660 each. The whole skin was up for US$22,000 and wine from marinated tiger penis being the most expensive of all, at a price of US $490 per 500ml. Response from the Chinese government

The worldwide population of wild tigers is less than 4000 today. While now, three decades later, there are more than 200 facilities that house 5000-6000 tigers across China. Some like Siberian Tiger Park in Harbin and Guilin’s Tiger Mountain Village hold more than 1000 captive tigers each. Here they are placed in gruesome conditions within extremely confined concrete enclosures. Their physical conditions have caused them to suffer from severe mental and physical distress. Many show signs of genetic deformities caused by serious inbreeding. Some are obese from overfeeding, while some are weak and starving. They are occasionally even used as props for photo-ops by tourists. These animals are not capable of adjusting to the wild. They can be a huge danger to humans and other species if released. And they are also a danger to other wild tigers.

When questioned about this, the Chinese government has taken the stand that if America can breed and slaughter cows to fulfil the feeding demands of their people, so can they. But what the Chinese government does not understand is that by creating a demand for tiger body parts, they indirectly promote the poaching of wild tigers. Who’s to know which parts come from a wild tiger or a tiger in captivity?

People across the globe are rightly asking for the ban of these farms to ensure the well-being of the tigers.